When I am not in the kitchen, I’m at the computer or looking at a family photo.  When I started Ancestors in Aprons, I also added to my first blog, A Traveler’s Library.  As I was reviewing a novel called A Lady Cyclist’s Guide to Kashgar on A Traveler’s Library, I discovered some lines by author Suzanne Joinson that definitely struck a chord with this family historian–and maybe with you as well.

Freida, a character in the book, has inherited a whole apartment full of a woman’s life-long accumulation. There she discovers a picture of her mother who has been out of her life for a long time. She says at the beginning of a chapter, “A photograph can do this, unpick at time.” On the next page:

Looking again at the picture she almost physically fell backwards: Family photographs are slips of time, trap-doors to the past… 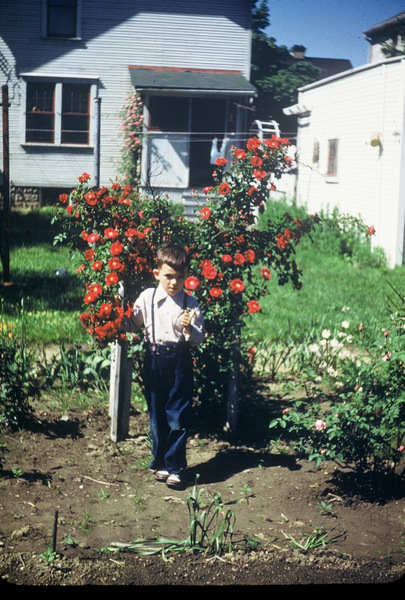 Brother in garden at Loretta Avenue house in Columbus, Ohio (Circa 1950)

That seems so right to me.  One look at an old family photo sends me spiraling back to summer on Loretta Avenue in Columbus, Ohio. I smell the wet grass. I recall sitting on the steps of the back porch watching fireflies blink. I smell the garlicky tomato sauce cooking next door. I hear kids calling each other up and down the block, taking advantage of the last shreds of light on a summer day. All those things  are not in the photograph, but are in my memory–picked loose by the picture. 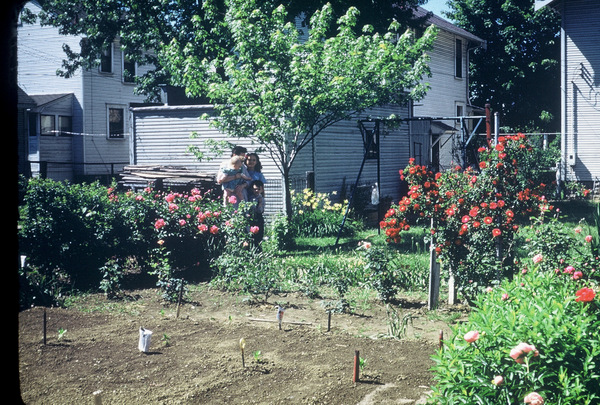 The garden on this, what I believe was an Easter family photo, shows mostly flowers, but there were vegetables, too, and one of the memories is Daddy (Paul Kaser) sitting at the kitchen table with graph paper, plotting out the arrangement of flowers and vegetables, taking into account the height, the time of blooming and the color.  As I pondered the time he spent on that garden, it suddenly occurred to me that this was the very first house he ever owned. No wonder he put so much of himself into it.

Alas, we only lived in the Loretta Avenue house slightly over two years until Daddy decided that the city was not a healthy place to raise children, and we moved back to the small town of Killbuck. There he got out the graph paper and planned another glorious vegetable garden in the yard that supplied salads all summer long.

Do you spiral back in time when you look at family photos?