Since my cousin, Herb Anderson is a slight bit older than I am, I asked him if he could remember anything about our grandparent’s restaurant. He remembered a lot, including blue plate specials! 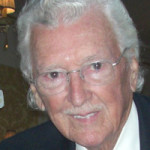 I am not sure of the beginning of the restaurant  I would guess around 1936-37 and remember when grandfather Guy died (1945) they were not operating the restaurant, but I still remember that after every basketball game grandmother offering me a piece of pie and a glass of cold milk. (That would have been about 1944).

Grandfather always keep a large wooden club and a blackjack ( pebble filled leather pouch that served as a weapon to knock out trouble makers) I remember there was always trouble on Saturday nights and that little Guy was not in the least afraid to step up to any trouble maker. Dad (Herb Anderson Sr.) and Uncle Bill were there to back him up. 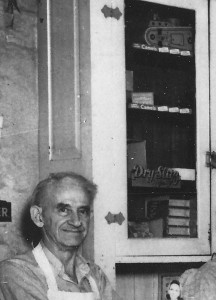 Bob Anderson [son of Bill and Sarah Anderson]  and I, when we were 10-11, worked on busy nights and served beer and food until someone reported us to the authorities and shut us down. Bob and I would have a contest to see who could bring in the most money.

On the [risque] side, Grandmother found a condom in the entrance way and accused Guy or Dad having his way with a nice-looking girl who worked part time. I never knew the outcome of this.

The food was always good country cooking: sliced beef with potatoes and gravy, meatloaf, and as you know, wonderful pies.

Dr. Benson (the town dentist) and “Doc” Kaiser [the druggist] were regular customers of their Blue Plate Special. Dr Benson was a fiend on Cokes, drinking one after another.

They had a jukebox that was popular .One gentleman would always be playing Hank Williams (Your Cheating Heart ) as his wife had left him for another. 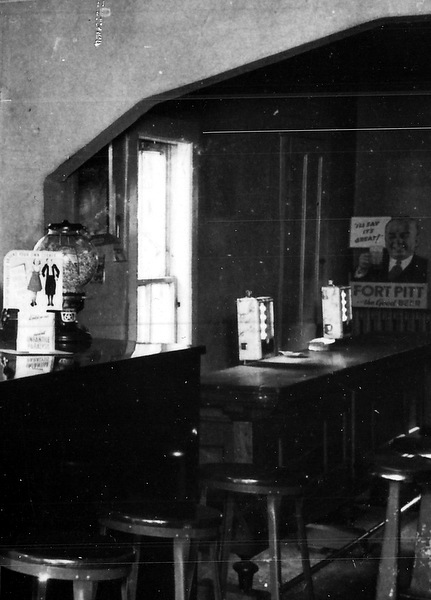 The room that later served as living room and dining room, was filled with wire back chairs & stools.It was usually used on weekends and busy holidays. You stepped down [from the long front room] one step into the next room that had a big arch, this room was where most of the restaurant action was.Two small booths to your right  and bar stools at counters and a table or two including the wire ( ice cream tables & chairs ) were used doing the restaurant days.

[The small room on the left in the rear was the kitchen]. The room at the rear to the right of the kitchen behind the bar was where they always had a big cooler with piles of ice to cool the beer.

Grandmother Vera & Guy had a small table sitting in the picture window and always had a game of 500 Rum going. They keep score carefully so when they were interrupted they would jump right back in the game.

I remember they set up large tents in the yard between the property and Dr. Benson’s office next door and would serve beer outside during hot summer days,  weekends and holidays. There was a door right next to their card playing table that was used for access to serve the tent crowd. It was always a busy exit. Bob & I used to take turns mowing the yard .We were paid one big Quarter.

The beer garden was a special event in the 30s. Grandmother had a flower garden right in the center of the yard that ended up as the center display under the tent.

Grandpa Guy would play pool with his brother Ben ( who had a metal hook replacing an arm lost I believe on a railroad track ) but he played pool as well with the metal hook as [others with] fingers. I would follow Grandpa as he started to walk back from the pool room ( Toe’s Pool Hall ) to the restaurant and hit him up for a quarter that he always gave me. Toe’s was a center of attractions. They later put in king pin bowling ( miniature balls ) that went well for a while. I set pins. Because the balls were small they traveled at a high speed and the pins would fly. It is a wonder that I survived.

Many thanks to my cousin Herb Anderson for sharing his childhood memories of our Grandmother and Grandfather’s restaurant.

I also asked some old timers who still live in the Killbuck area to see what they could learn, and Larry Neal gave me some interesting tidbits. This is what Larry wrote to me:

Paul Smith, another of my classmates, remembers walking down the hill after school with your cousin, Herb, and going into the restaurant by the backdoor (into the kitchen).  Paul’s Dad was the minister of Killbuck Christian Church so Paul couldn’t go in the area where they sold beer.  He also remembers the 1926 Essex automobile of your grandparents.

Another classmate, Victor Snyder, remembers saving pennies so that he could go into Andersons Restaurant to buy a 5 cent hamburger!

I’m still fishing for more information on the restaurant. I thought it would be interesting to see a menu, but then it occurred to me that they probably didn’t even use menus. And I don’t have recipes for any of those blue plate specials. Either you know how to cook mashed potatoes with pot roast and gravy, or you don’t! But I imagine that since I make meatloaf the way that my mother made it, that Grandma Vera probably made it about the same way. (I make it without onions, and add garlic and celery, and sometimes grated carrot). 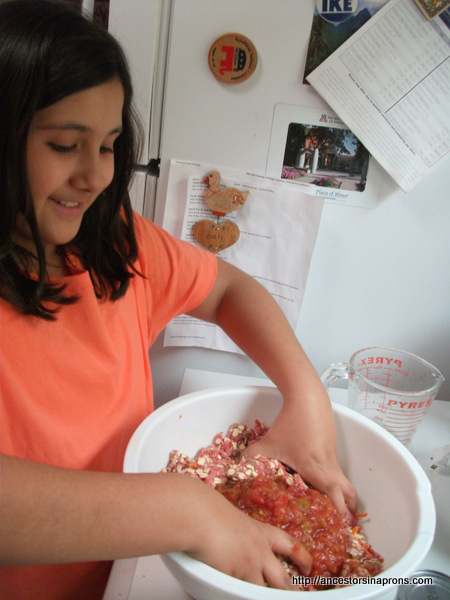 Beat egg. Put all ingredients in large bowl.  Mix with your hands. If it seems too dry, add a little water or broth.  Pat into two loaf pans. Spread catsup on top. Bake at 350@ for about an hour. (Stick a knife into the middle to see if it is done.)