[This article pertains to Joseph Kaser, ancestor of my father, Paul Kaser (1909-1996). And the aprons hold nails instead of protecting from batter spatter.]

Joseph Kaser (b. c.1827-d.?), my paternal great grandfather, was a carpenter. And that is about all I know. 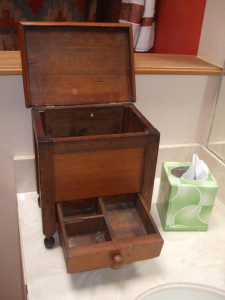 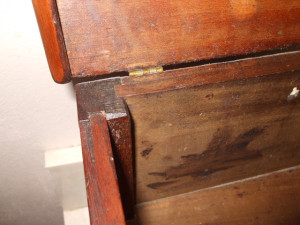 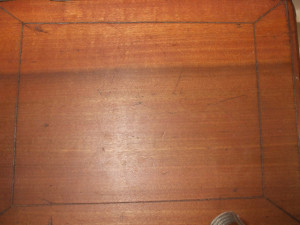 The joinery on the top of the lid of the handkerchief chest. 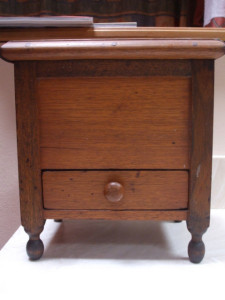 I inherited this little chest, which my father said was a “handkerchief chest” and I love all of it.  The wood, I think–because I’m not an expert–is walnut. A common wood in Pennsylvania and Ohio where Joseph lived.  It does have some small nails, so is not all put together with mortise and tendon joints like an earlier chest that I have from the other side of the family. But it has beautiful turned legs, and some lovely joinery. The chest has held up pretty well, considering that it must be somewhere between 120 and 160 years old.

I like the compartments in the drawer to hold odds and ends, and the large space under the lid for handkerchiefs. I put the Kleenex™ box there for a size comparison, but it turns out to be an ironic reference. People DID once use a lot of cotton and linen handkerchiefs!

Although I have tons of information about my mother’s ancestors–particularly following a maternal line back through the ages– my knowledge of the Kaser line stops in Bloomfield (now Clark), Coschocton County, Ohio with Joseph Kaser, born around 1827.

So why don’t I know more? Because I have only done on-line research and that only gets you so far. And also because I once counted up the variant spellings of Kaser and came up with a dozen before I gave up.  And then there is the first name, Joseph, (with so far, no indication of a middle name) which is about as common as it gets.  There are Joseph Kasers galore in Ohio and Pennsylvania around the early 1800’s. Not even counting all the Kayers and Kaisers and Casers, etc.

My father knew that his grandfather lived in Coshocton County when my paternal grandfather, Clifford Kaser was born. And father knew that his grandmother’s name was Catharine Sampsel. What I have been able to track down is that Joseph married Catharine Samsel (which also is spelled Sampsel) in March 1847, and the 1880 census tells us that Joseph was born in 1827 and Catharine was born in 1825.

According to that same census report, he and his parents were all born in Pennsylvania, so Joseph’s family may well have been in the United States during or before the Revolutionary War, but when and from where and how and why did they come to the United States?

Because their children are listed in the 1880 census, we can see that the Kasers lived in Ohio at least from 1852, because their oldest son, David was 28 in 1880 and was born in Ohio, as were all the other children. David is married in 1880, and still listed as living at the residence of his parents.  The complete list of Kasers in 1880 folllows.

Not only have I not been able to find out who Joseph Kaser’s parents were or when their family came to the United States, or what country they came from, I am searching for information on a rare Kaser relative that I actually met. She was “Aunt Jennie” whom I visited with my father in the 1940’s and 50’s in Mt. Vernon Ohio. How is she related to these people?

[NOTE: A little more searching and I discovered that Aunt Jennie was actually related to my father’s MOTHER rather than his FATHER–so she was not a Kaser. More to come.]

But I have many more avenues to travel down before giving up.  I can track every one of the siblings of Clifford Kaser to seek more information. I can post on bulletin boards on genealogy sites. I can follow leads in an old newspaper article I found in my father’s files about a band in Clark, Ohio that ties to another keepsake–a battered old trombone.

The family seems to be full of people who are handy with their hands–from carpentry to tin- smithing to playing the trombone.  My father enjoyed making things, but the things he built for me, I left behind as Ken and I moved from house to house. He had built bookcases in our Columbus, Ohio house and when we moved to Arizona, he built bookcases for us, and repaired anything that needed fixing in the five houses we lived in before he died.

Meanwhile, if you know anyone named Kaser, ask them if they know about Joseph the carpenter who lived in Bloomfield/Clark, Ohio. And let me know.