Grandma Vera Anderson was as at home in the outdoors as she was in her kitchen.  One of my favorite childhood food memories involves the wooded hills around Killbuck, Ohio. ( And one of my most traumatic came out of those woods, too, but I’ll save that for  another food article.) 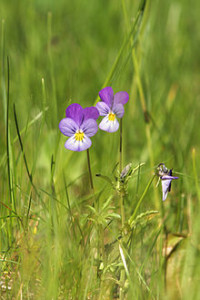 In the spring, we would grab a pan or bucket and drive out across the Killbuck Creek toward the densely woods hills around town to hunt for Morel mushrooms.  As we walked across the spongy floor of the woods, detouring around the shed-sized boulders that had been carried there by  long-ago glaciers, grandma would point out spring flowers. The tiny vivid blue violets were so small you could make a bouquet in a thimble. The johnny-jump-ups poked through old leaves and jack-in-the-pulpits stood tall and shyly pulled a “cowl” over their lily-shaped flower. If we were really lucky, the dogwood would be in bloom with its brown-stained white petals.

But the point of the walk was to find  mushrooms.  Of course there were plenty of fungi growing in the dark, damp woods, but grandma explained that we could only pick certain kinds. I had to stay away from the bright orange ones, the small white ones.  Finding edible mushrooms is a dicey business. The Ohio State University Extension service in its on-line article says, ” Edible mushrooms are known to be safe to eat because they have been eaten frequently with no ill effects. Poisonous mushrooms are known because someone ate them and became ill or died. There is no test or characteristic to distinguish edible from poisonous mushrooms.”  In other words, you need someone like Grandma Vera to point out which ones you can eat. 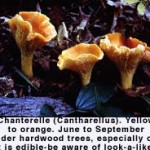 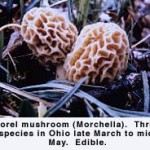 I would get very excited when she found the small mushroom with a tall, spongy, pointed cap or those with the wavy tops. We would pick all we could find, then head back to the house.

Grandma brushed off the loose dirt, melted butter in the cast iron skillet, and stirred the mushrooms around for a few minutes as they released the tantalizing smell of the woods.

Decades later, I was amazed to learn that the very trendy Morel and Chanterelle mushrooms served at fancy restaurants that charged outrageous prices, were one of the very same mushrooms that I picked with Grandma in the Ohio woods.

Some people fry them in batter, but to me, plain butter and mushroom is nirvana. Of course if you want to go all fancy-pants, you can check this Saveur recipe for trout with wild asparagus and Morel mushrooms.

Although I would like to say that I go out in the woods for my mushrooms, in fact, I rely on commercial growers. Therefore it is fascinating to learn of Killbuck Valley Mushrooms, which is not in the town of Killbuck, but nearby outside of Wooster in the next county to the north. The link will introduce you to the modern way to “gather” mushrooms. Not as much fun, but equally delicious. Alas, mushrooms do not travel well, so you need to live near Wooster to take advantage, and unfortuantely, they do not grow Morel mushrooms.

8 thoughts on “Wild Foods: Hunting Morel Mushrooms in the Woods with Grandma”