Foraging for mushrooms, blackberries and dandelions is one thing, but I will never forget the trauma of seeing my brother, all ruddy-faced from the cold and beaming with excitement, as he carried the limp bundles of fur into the kitchen at Grandma Vera Anderson’s house. Daddy in his red and black plaid wool shirt was right behind him, his smile even broader with pride at how the little guy (Bro Bill) had learned to stalk and shoot in the Ohio woods. They had been squirrel hunting.

For some reason, all the grown-ups were equally excited and happy. Eleven years old, I was simply appalled. Squirrel hunting was disgusting. How could anyone purposely kill those cute little critters with the big bushy tails. I loved squirrels with their big brown eyes and their business as they scurried around the woods. 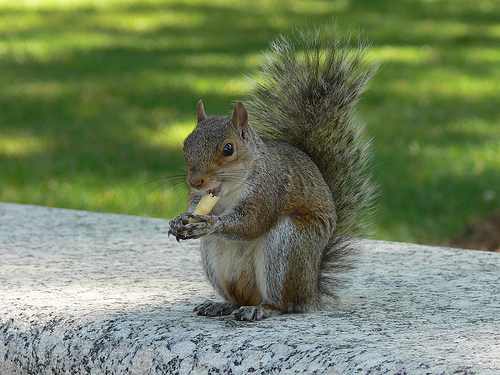 When we lived in Columbus Ohio the year before, we had put a spoon full of peanut butter on the kitchen window ledge and my brother and I laughed as we watched them pick up the spoon and lick the peanut butter off.

And now he had taken a rifle out in the fall woods and actually aimed at them and pulled the trigger! Worse yet, Grandma was getting busy taking off their skins and getting them ready to cook.  I wasn’t around to watch that wretched procedure, having thrown my hissy fit in the kitchen when the mighty hunters returned and stomped out to my bedroom. I certainly wasn’t looking forward to dinner that night.

Okay, I don’t think anybody tried to talk logic to me. Since you ask, I did eat chickens, and turkey, and cows (beef) and pigs (pork) and lots of other animals, and I don’t know how I would have responded if someone had tried to reason with me.  After all, the squirrels were just so darned cute.

I do know that over the years my father and my brother tried to convince me that the benefits of hunting was a pleasant, manly gathering in the outdoors, (reuniting with nature and with their primal selves, I would have added). 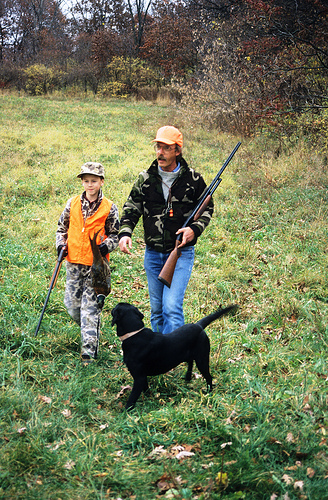 Not a picture of my daddy and my brother. Photo by Wisconsin Department of Natural Resources.

Hunting was so important in the time and place I grew up in that there were actually school holidays during hunting season–in some places the entire week of Thanksgiving and in others just the first day of deer season. (The present Ohio hunting seasons are listed on this page.) There was even a kind of social scale that divided people according to what they hunted.  The lowest levels of society hunted possums (regarded as little better than road kill by some) and the higher range of activity would be deer hunting.

Despite being surrounded by a hunting culture, I knew next to nothing about guns. “That could put your eye out,” the perennial warning about B-B- guns,which every boy wanted by the time he was nine or ten.  And I knew that you couldn’t shoot small animals with a shotgun because there was too much shot.  And I knew that you had to get used to the “kick” of a fired gun, but I knew all this through listening, not from practice.

Hunting is still a popular sport, somehow more forgivable when people actually eat what they hunt, or make it hard on themselves by hunting with bow and arrow instead of gun. And wild game is a popular item on restaurant menus. But grandma, who had no patience with my squeamishness, was of a practical turn of mind, and if somebody brought something edible into the house, she’d cook it. And eat it. But this is kind of how I saw squirrel hunting–and frying:

Photos used here come from Flickr and are used with a Creative Commons license. You can click through the first two to see the photographer and learn more about him. The bottom photo is by Mike Licht, and here is the link to his Flickr page.

2 thoughts on “A Life and Death Story: Squirrel Hunting and Frying”