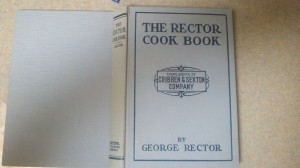 Since blueberries were on sale, I decided to make a blueberry pie, and just for kicks, looked in a vintage cookbook for a recipe. So often when I’m in the kitchen, I am reminded of family members. This day made me think of Great Aunt Maude and my sister-in-law’s mother, Norma Haggberg. 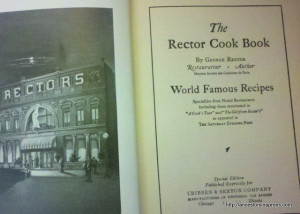 I’m guessing that the book, which says “compliments of Cribben & Sexton Company” on the cover, was given away with ranges made by a company called Universal.  The foreword, by George Rector, has praise for the stove: 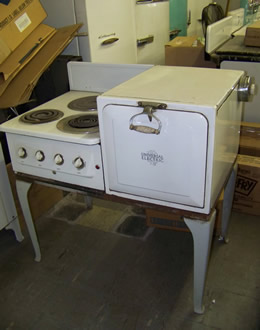 Universal Range 1930, for sale at Antique Appliances.com refurbished for $3800.

“Aside from the beauty and the practicability of Universal Ranges, I am particularly impressed with the simple In-A-Drawer broiler.  The house-wife surely must appreciate this one, of the many improvements, that has made the UNIVERSAL famous,” says George.

Universal range, 1930, with broiler in a drawer.

I like vintage cookbooks because they shed light on how our view of the act/art of cooking changes over the years, how certain dishes and foods find favor or disappear from view.

The Rector Cook Book foreword has a fascinating clue as to how the very modern housewife of 1928 (my Aunt Maude, my Grandmother and others) saw her kitchen. (Original punctuation.)

“In former years the poor kitchen came in for much abuse, broken chairs, old pictures and bric-a-brac were delegated to the kitchen.  Today it is, a kitchen deluxe–everything is modern, cheery and bright.”

Rector’s was a famous restaurant around the turn of the century (from 1899-1914) in New York City. Which of course makes me wonder if Uncle Bill Stout dined there in the gay nineties.

Blueberry pie with lattice top from The Rector Cook Book

This picture of my Blueberry pie is unretouched–broken top crust, boiling over filling, and all. The recipe is vintage in two ways. The recipe from a vintage cook book, and the lattice made with an inherited tool.  When my sister-in-law’s (Norma Haggberg Kaser) mother died and I went to California to help Norma clean out her mother’s apartment, she encouraged me to keep any kitchen tools that appealed.  I took a round plastic lattice-pie-crust maker.  You roll out the dough, then place it on top of the circle of plastic and run your rolling-pin over. It cuts out the little windows you see in the picture.

Blueberry Pie from The Rector Cook Book (with notes)

Note: even that small bit of vinegar gave the pie a slight vinegar taste. I prefer the more commonly used lemon juice instead.

The Rector Cook Book is listed in several different forms on Amazon by affiliate sellers.  However, most of them are sold out. The one that looks identical to mine has a list price of $50.00.  Pretty impressive for a giveaway book, wouldn’t you say?

The preface to the book is priceless, and I no doubt will return to it at a later date.  Suffice it to say, I love the man because he claims to have introduced lobster to the American restaurant menu at Rector’s at 44th Street and Broadway in New York City. But George Rector is not the only one to have a high opinion of Rector’s.  Village Voice’s Food Blog listed it as one of the ten best New York City restaurants in the past two centuries. You can learn more about the restaurant and the man in this article at Toque Magazine on line.