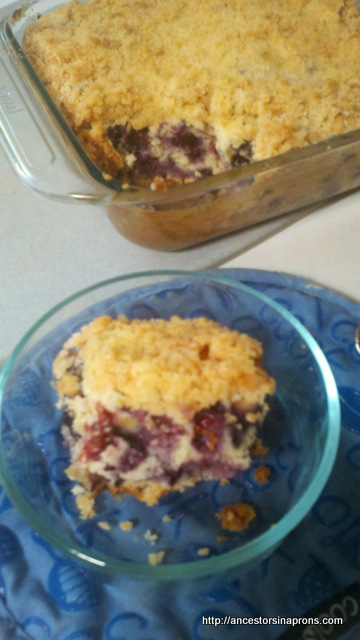 Buckle out of pan

Writing about Aunt Sarah and her Cherry Pudding the other day, got me thinking about all that enormous variety of American Fruit Dessert and which ones were most common in our family. As part of the parsimonious nature of our rural foremothers, nothing could go to waste.  So there had to be lots of fruit recipes. You couldn’t use all of them up in jams and jellies, after all, and after a while you wanted a change from pies.

By the way, I was chastised for saying that Aunt Sarah’s cherry pudding is not really a pudding because in Brit-speak any dessert is pudding. I still maintain that in British English you might call it pudding, but you wouldn’t necessarily say “cherry pudding.”

Confession: my motivation for talking about Aunt Sarah’s cherry pudding was that I had bought more cherries than I could eat and they were going to go to waste if I didn’t cook them. Like great-grandmother, like great-granddaughter. 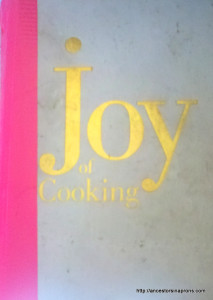 Stained, taped together Joy of Cooking (1997)

Although I paged through a bunch of old recipe books for traditional fruit desserts, the most complete answers came in Joy of Cooking 7th Edition (1997 edition by Erma S. Rombauer, Marion Rombauer Becker and Ethan Becker), which is as much a research tool as a cookbook. This edition was updated by Ethan Becker and lost some of the traditional recipes of the Rombauers, so I kept a previous edition (1964) on hand. I’ve worn both of them out. On page 894, you can find a whole section called American Fruit Desserts.

These American fruit dessert recipes all combine some sort of dough–usually close to biscuit or pie dough– and any kind of fruit you have on hand. As Joy says, “These desserts seem descended from puddings on one side and pies on the other.” In essence pretty much anything goes, and every new version seems to get a new name.

So here goes, a short primer. **Indicates some family favorites of the American Fruit Dessert.

Boiled fruit with a biscuit or pie dough crust surrounding the fruit. Traditionally sweetened with molasses or cider. Sometimes the crust is broken toward the end of cooking and partially submerged in the fruit juices. 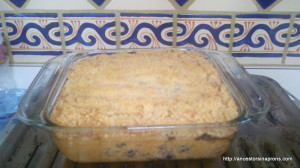 Fruit mixed into the dough, topped with a sugar/flour streusel topping. (See recipe below for Blueberry Buckle)

Deep dish with single crust on top, but sometimes the biscuit-like dough goes on the bottom

Like Brown Betty, except the crumbs all go on top.

According to Joy, the British refer to crisps or crumbles made with oatmeal as ‘crumbles.’ It is an entirely appropriate name. This was one of my traditional family favorites, only my mother called it a Brown Betty and. I like to think that this (unwritten) recipe had been passed down for generations from our British ancestors. I must admit I never ever saw mother or grandmother use breadcrumbs in a dessert.

A pouch of dough with fruit inside. This was one of my mothers BEST desserts.  She made pie dough, rolled it into a square and piled on sweetened, spiced apple slices. Then she brought the corners up to form a pouch, sprinkled the top with sugar and baked. In a bowl with milk it made a meal.

I think my three sons would have laughed me out of the kitchen, had I told them we were having Grunt for dessert. This sounds very British, also.  It is a  fruit pudding steamed in a mold with a pastry lined mold.

Grunt’s first cousin, the Slump is fruit cooked with dumplings on top in a covered pan.

Large sweet biscuits, split and topped with fruit–most commonly strawberries and served with milk, cream or whipped cream. Another of my mother’s specialities. A Strawberry shortcake in each bowl and some slices of cheese and cold meat and call it a meal!

Usually pineapple, but I’ve made a delicious pear upside-down cake, these are best in a cast-iron skillet. Fruit on the bottom with lots of brown sugar and butter for a crust, cake batter on the top,and baked in the oven.

And of course I’m taking for granted pies, tarts and turnovers, all made with pie dough.

Other desserts with foreign roots that have made their way into American favorites:

Kuchen: German for cake, in this case it generally means a fruit-filled yeast dough pastry.

Clafoutis: Since reading David Lebovitz‘ The Sweet Life in Paris, I have become addicted to the incredibly easy-to make light cake with fruit concoction from France.

Plum Cake Cockaigne: I’m guessing this is a German dessert, but the only recipes I find for it in a quick search on line are the one called Plum Cake Cockaigne (an imaginary ideal land) in the Joy of Cooking. Works for me. One of my families favorites. I’m sure it is good with other fruits, but so good with plums, why bother? Cake, topped by pretty rows of sliced fruit and a light streusel topping.[Update: I learned in a story about Joy of Cooking, that the Rombauers, authors of the cookbooks, slapped the label “cockaigne” on anything they made up themselves. Made it sound fancy. So I still don’t know the origin, other than the Rombauer family.]

So what is your family’s favorite traditional American Fruit Dessert? Got one I didn’t think of?

And now here’s my take on Joy of Cooking‘s Buckle recipe, my personal favorite of the American Fruit Desserts, in this version, I add a small twist: 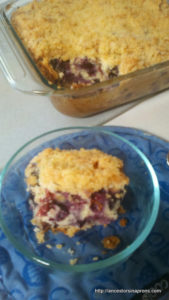 Called the Buckle because it buckles after rising. When you take it out of the oven, it will be domed, but it will be craggy and bumpy after a few minute of cooling.

Good warm or cool, with milk or whipped cream or plain.

I substituted almond milk with no ill effects, and the almonds are optional, removing two possible allergens.

Use with many different fruits. I took this recipe from The Joy of Cooking cookbook recipe for a Bosenberry and Peach buckle.

Be sure to combine the ingredients separately as instructed--the sugar, butter, egg, milk and vanilla mixed together and then into the dry ingredients for best combining.

2 thoughts on “American Fruit Dessert. Is It a Crisp, a Crunch, a Slump, a Grunt or a Buckle?”