“If music be the food of love, play on.” Twelfth Night, Shakespeare.

Although we usually talk about food that reminds me of family, this time it is music. The community band, to be exact.

Here’s how my week went so far. 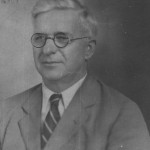 The church in the picture is the Killbuck Church of Christ. My great-grandfather Dr. William Stout helped raise funds to build the building and the family  continued to worship, be married in and buried from that church for generations. It still stands at the foot of School House Hill–also the home of the cemetery. Unfortunately, the steeple was damaged in a windstorm and never replaced, so the church now lacks the grace of its earlier design. 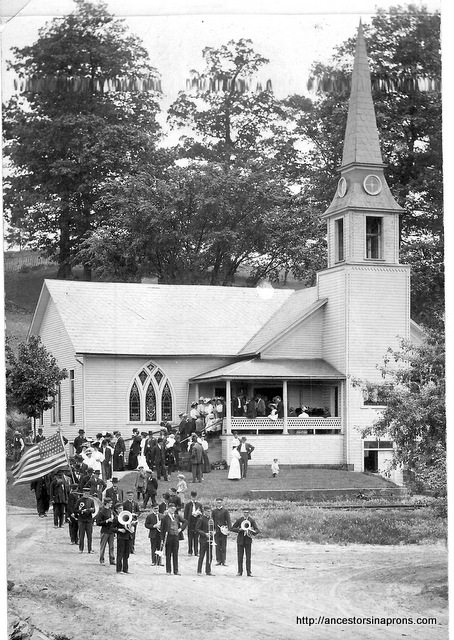 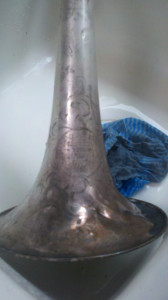 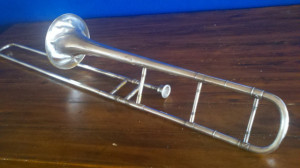 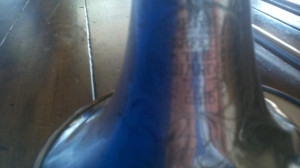 It was common for villages and towns to have a community band around the turn of the 19th-20th century, and the tiny communities of Clark and Killbuck where my ancestors lived were no exception.  Many towns had bandstands. To my knowledge, Killbuck never had a bandstand for its band, but the newspaper article I found had a vintage photo of the Clark Bandstand which stood until 1938 according to the caption. 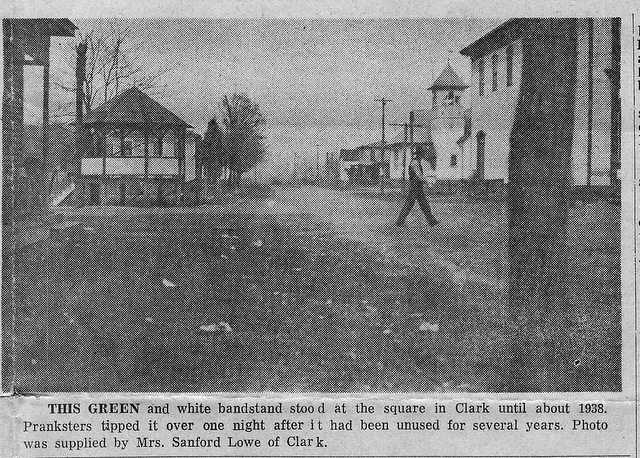 According to the newspaper article, the community band was known as the Bloomfield Band, even after the community was renamed to Clark. One remaining band members says they practiced every Tuesday and “we played at reunions, picnics, homecomings and fairs.” The band members, in their “smart gold-braided uniforms” were even asked to play in other communities, but never charged. They played in Coshocton, the nearest big town and marched with eight other bands in the Labor Day parade.

Florenz Schiebe who was in the Bloomfield community band, the band provided the instruments as well as the uniforms. They traveled from town to town on a painted wagon and would play as they passed through a smaller community. They even took the train to big “gigs” like playing at Myers Lake in Canton and Silver Lake resort near Akron.  After the Bloomfield Band broke up, Scheibe played in the Killbuck band  after 1912 or so.

As to Kasers in the community band–much of this article was based on an interview with Bessie Kaser Lowe, daughter of Dave Kaser who was a brother of my paternal grandfather, Clifford Kaser.  Dave Kaser played tuba, Cliff Kaser played trombone [the one pictured above] Homer Kaser and possibly Ira Kaser ( sons of Dave and brothers to Bessie) also played trombone. Ed Kaser (Clifford’s younger brother) played 1st cornet. Austin Kaser( a cousin of Dave) played tenor horn or trombone. In this article, Bessie says that Cliff was the town barber.  That means he played in the band sometime between the 1893, when he was married and 1914 when he had a tin shop in Killbuck.

The article further says that Homer and Austin left to work at the rubber tire company in Akron.  A second band started that lasted until 1920, and Harry Kaser [Another son of Dave] played in that one.

Unfortunately, I do not have any pictures of Clifford Kaser playing his trombone, but somehow thinking of him riding through the Ohio countryside in the community band gaily painted wagon pulled by draft horses while blasting away on a trombone, gives me a whole new picture of him. Would a villain play a trombone?

13 thoughts on “The Old Battered Trombone and the Community Band”