I heard it on TV, so it must be true. You will eat ice cream on July 4. 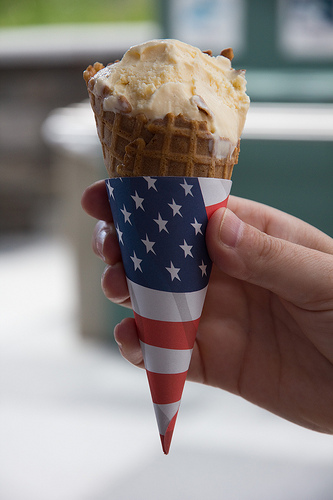 Each American eats an average of 5 1/2 gallons of ice cream per year. (Somebody is eating less than their share–because I’m SURE I eat more than that.)

July is the month when the most ice cream is consumed, particularly on July 4 when Americans are also scarfing down 150 million hot dogs on a single day.

So since July 4 is nearly upon us, I thought I’d talk about memories of ice cream and family. 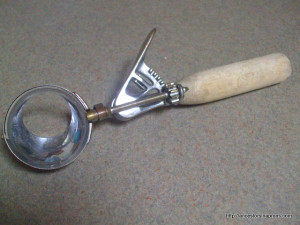 The first thing my husband Ken thinks of when I bring home ice cream is a little ritual that went on in the Kaser household. He learned about it when we were dating during our Ohio State University days and he occasionally came to dinner in Hilliard.

We had a 2nd refrigerator in the basement of our house, that held mostly soft drinks in the bottom part, and a freezer full of ice cream. When everyone had about finished eating, Dad (Paul Kaser) would say, “Does anybody want any ice cream?”

Well, since Ken is Swiss through and through, he never met a dairy product he didn’t like, and he particularly loves ice cream. So the first time he visited us for a meal around our kitchen table, he eagerly said yes, he’d like some ice cream.

“Well, then, since it is in the basement, maybe you should go down and get it, ” my Dad said, and the rest of us giggled.

The next time Ken came to dinner and Dad asked, “Does anybody want any ice cream?”, Ken knew to just bide his time. 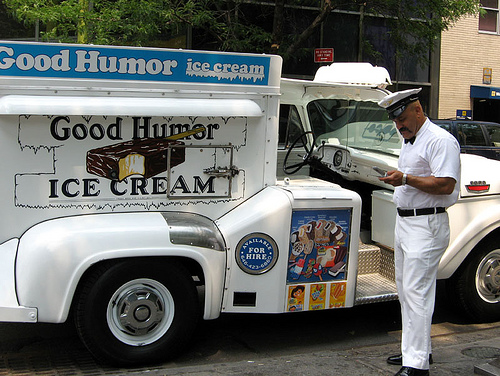 My own association with ice cream starts with the Yummy Man–that is what we called the mobile ice cream seller, who was probably in a  Good Humor Truck. Hearing a certain little tinkling tune played by bells takes me back to Franklin Avenue in Columbus, Ohio. In a Pavlovian response, the bell makes me salivate and hunt for some change. 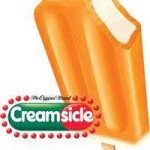 The regular ice cream treats cost ten cents then– chocolate-coated vanilla ice cream, push-up (sticks of sherbert) or my favorite, the Creamsicle©–vanilla ice cream coated in an orange-flavored coating. For inquiring minds–the Dreamsicle© is ice milk instead of ice cream. Every afternoon, the children would come pouring out of the big brick houses in our neighborhood to gather around the little white truck with posters showing giant sized ice cream treats. (The picture above would be perfect if only the guy weren’t using a cell phone!)

We would wait–not so patiently– on the hot sidewalk  to turn over our dime and get our treat. Sometimes, I just could not be satisfied with the Creamsicle© and I’d have to get a Drumstick©. You know a Drumstick©? It’s a waffle cone coated on the inside with chocolate, holding vanilla ice cream with chocolate coating and peanuts sprinkled on top.  It cost a little more, so it was a special occasion treat. Recently Dreamsicles© have come back to popularity in new forms, particularly in bars. There the name is applied to a drink made with vodka. But none are as intoxicating as the Dreamsicle© bought from the Yummy Man on Franklin Avenue.

Another ice cream and summer event that I miss is Ice Cream Socials.  Every small town had an ice cream social or two during the heat of summer.  I particularly remember, for some reason, the ice cream social on the Holmes County Courthouse grounds in Millersburg, Ohio. I went with my Uncle Keith Kaser (1894-1963) and his wife Blanche, who lived in Millersburg. 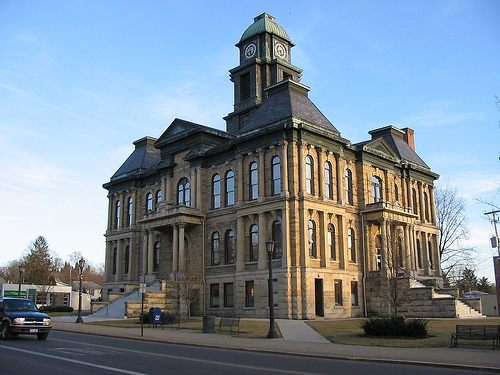 Long tables lined the sidewalk along the main street in front of the courthouse. Besides getting a dish of ice cream at one of the tables, you could browse among the most amazing array of baked goods.  Some pies and cakes you could buy by the slice. Some were sold whole or auctioned off.  Ever housewife in town tried to outdo all her neighbors in showing off her culinary skills, so you knew they were all going to be great.

Even though the Ice Cream Social and home-baked goods extravaganza took place right in front of the center of law for the county, there were no health department licenses or inspectors. And, far as I know, no one died–at least not immediately. Although I can’t vouch for the clogged arteries and raised blood sugar that might have resulted.

As long as we’re thinking of the people that food reminds us of–how about a Fourth of July Thomas Jefferson’s recipe for ice cream?

According to the folks at Monticello, although George Washington referred to ice cream and we all know that Dolly Madison famously served it in the White House when she was First Lady, the first hand-written celebrity recipe for ice cream was penned by the multi-talented Thomas Jefferson.

And in his honor, Xanterra, the food and lodging folks at many National Parks, will be serving up T. J.’s ice cream at Mt. Rushmore this summer.

Will you be eating ice cream on July 4? Do you remember the Yummy Man?  And what was your favorite purchase? Are you a Fudgesicle person? Or Drumstick? or Popsicle?

Or perhaps you’ll be stopping at the Dalton Dari-ette?

The top photo is my own, others are from Flickr used with Creative Commons license or from websites.