Favorite family memories flood back when I think of picnics. Not to mention photos of my ancestors camping and picnicking.

Mother (Harriette Kaser) never tied of telling about how on one of their expeditions to a summer cabin with friends, she wanted to bake a pie, but had no rolling pin. She used a beer bottle.

And then there was the time that she carefully packed everything for a cookout, including cans of baked beans and applesauce, but forgot the can opener.  (I recently saw a solution for that dilemma and am a little surprised my dad didn’t think of it.) 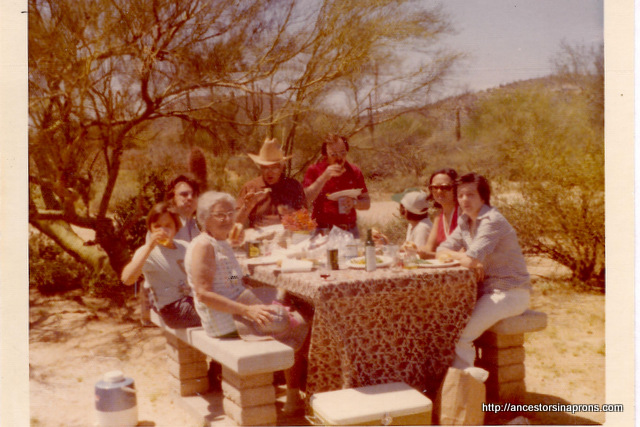 Often when we lived in HIliard, mother would throw together a picnic and we would drive to a park along the Olentangy River in Columbus Ohio and my dad would meet us there after work. The stand-bys were Tuna salad sandwiches (or bread, mayo and a can of tuna), deviled eggs (or plain hard boiled if she was in a hurry), peanut butter and jelly sandwiches, carrot and celery sticks, and some cookies. One picnic food that was rarely eaten any other time was a little can of Vienna sausages. Another was potato sticks (they came in a can like Pringles now come in). We also might have those little glass jars (reusable as juice glasses) with pimento cream cheese to spread on bread.

Earlier family get togethers, particularly those at a cabin on one of the small lakes in Ohio would get a little more complicated. Cold roasted chicken was a must, potato salad, perhaps a lime jello salad with cabbage and carrots, someone would bring a frosted cake in a cake carrier, and of course there would be watermelon for desert. A big jug of lemonade and another of water to quench our thirst would round out the meal.

Although on the vacation shown in the slide show below–my parents and two couples that were their friends vacationing at Lake Hope State Park in Oho in 1953–the drinks were stronger than lemonade. 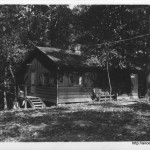 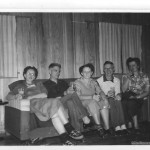 Friends from Killbuck with their highballs in the cabin at Lake Hope State Park, 1953 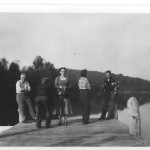 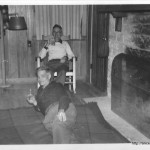 Mother said that Aunt Sarah made the best potato salad, but frankly, I think mine would give hers a good contest.  One key is the kind of potatoes you use. Baking potatoes are too mealy. You need new red potatoes, or my current favorite, gold.  The marinade is the real secret.  Cool the potatoes just enough to handle, then while they are still a little warm, pour over the marinade described here or any Italian salad dressing and let it soak in its flavor.

Here’s my recipe for my favorite potato salad. This recipe is very general, and takes lots of adjusting for your personal tastes.  I’m frankly not all that sure of the measurements, because I mix and taste constantly when I’m making this potato salad.  Oh, and for heaven’s sake don’t leave it sitting out in the heat! Keep it cool at the picnic. 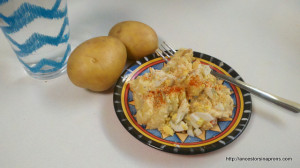 What is your go-to picnic food?