It’s not enough that my ancestors hang around my kitchen while I cook. They want to go on every road trip with me, too.

I certainly had a lot of travelin’ ancestors. Of course if you live in the United States and you’re not an American Indian, you had some people somewhere in your background who were adventurous enough to leave their native lands. But once they got here, some stayed put. Not mine!

This week I’m on a car trip, and so naturally, I am thinking about the ancestors and relative who took road trips.

Florida was always a popular destination, and I can do an entire photo essay of ancestors having their pictures taken picking oranges and posing with alligators. But here’s an interesting group. The formidable woman in black is my great-grandmother Hattie Stout. George Stout was her brother-in-law, and Maude was her daughter. 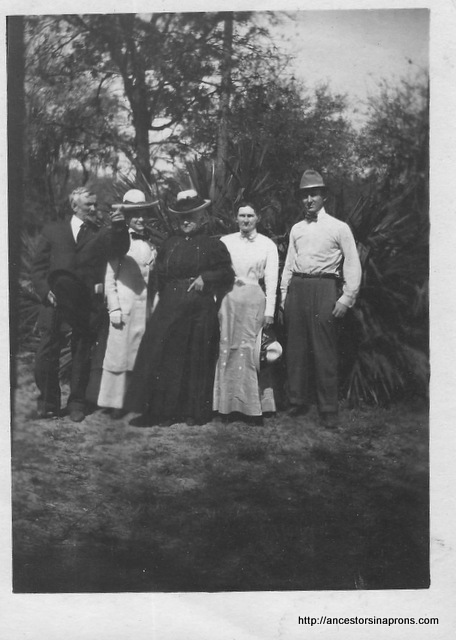 In the early days of automobiles, Grandma and Grandpa Vera and  Guy Anderson went on frequent car camping trips, tent camping trips and also stayed in cabins.  Ohio is blessed with many beautiful small lakes and wooded areas.  Grandma and Grandpa were even caretakers for a State Rest Stop between Killbuck and Millersburg for many years.  I remember riding with them up to the stop where they would sweep out the restroom, and pick up litter. Here they are in the Stutz car at a place identified as Rocky Hollow. 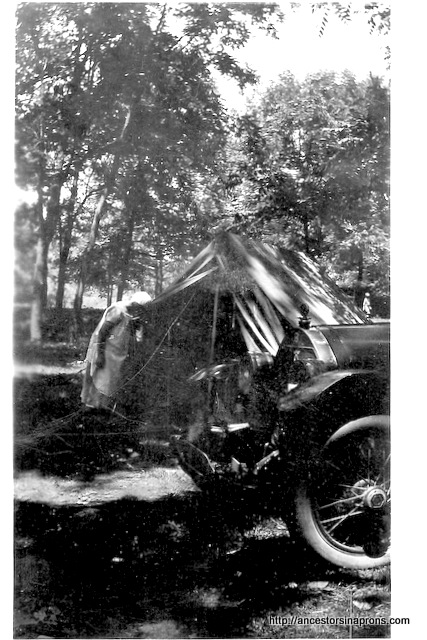 I’m no expert, and would welcome guesses from someone with more expertise, but I think this is a 1927 or 1928 Stutz, which would mean the camping took place late 20s or early 30s.

There’s a Rocky Hollow that is part of the Shawnee Forest and Shawnee State Park in southern Ohio, and also a Little Rocky Hollow in beautiful Hocking County that is now a nature preserve.  There are probably a hundred or so other places by that name, so I don’t really know where this road trip camp site was. If you know where they might have camped, please let me know in the comments below. But isn’t the Ohio Shawnee Forest beautiful? 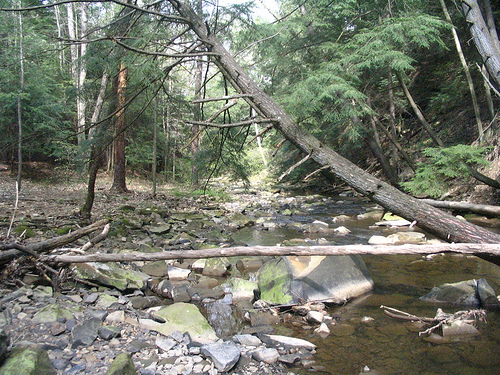 The young men in our family seemed to routinely take off on long trips.  Guy Anderson left home determined to join up in the Spanish-American War, but got there too late.  My father, Paul Kaser, took a road trip to Texas with some of his friends from high school. They ran out of money and had to come home.  My uncle Bill Anderson left a note with his mother and father when they lived in Columbus Ohio and said there was no work, so he was leaving for California.  He was about 19 and at loose ends. My mother was attending Ohio State University. I don’t think he actually went, because he married Aunt Sarah not long after that, but California has been a draw to others in the family that you’ll hear about later. Ah, yes, Jesse Morgan, I’m pointing at you.

The older women were not to be outdone by the young men.  Hattie Stout traveled to New York City to visit with her son William Morgan Stout.  Grandmother Vera  took a bus to California by herself in her late 60s, and rode back to Ohio with her son Herbert Anderson, his wife and family. I was about ten and remember being scandalized that such an OLD woman would go all the way across the country on a bus. My Aunt Blanche Kaser, (Mrs. Keith Kaser) who lived in Millersburg, traveled all over by Greyhound bus, once coming to visit us when we lived in Scottsdale. She was in her early 70s when she was gallivanting by herself.

My mother loved cars and when she was in her nineties, she recited for me the list of every car she had ever owned. One of her treasured trips was a road trip to Chicago for the World’s Fair in 1933 with Aunt Sarah Anderson and my Grandmother Vera.  (Mother and Father did not marry until 1938.)  She said, “I don’t know what we were thinking. We just got in the car and went with no reservations and no idea at all of what we would do when we got there.” 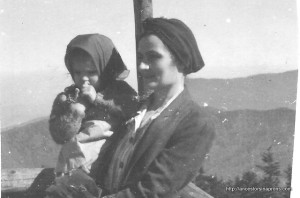 Vera Marie at one year old with mother, Harriette Kaser in the Smoky Mountains. 1940

I have always loved road trips myself. No wonder. My first road trip took place when I was one year old.  My parents and grandparents and Aunt Maude Bartlett set out for The Great Smoky Mountains in Tennessee.  The National Park was dedicated in the fall of 1940, so they would have been there shortly before Franklin Roosevelt inaugurated the park. (Which is a good thing, because my grandparents wouldn’t have gone near the place if FDR was around.) 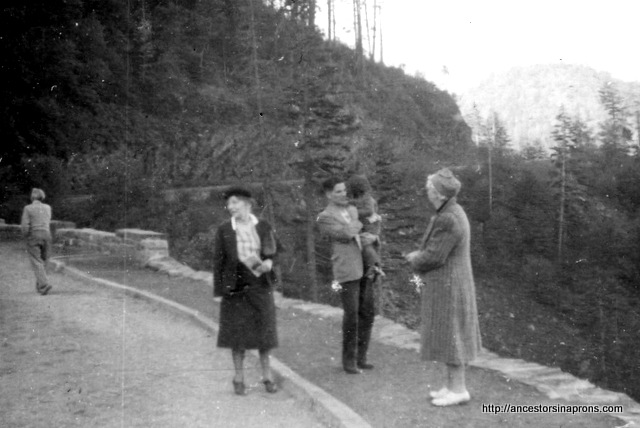 My first road trip. Here being held by my father Paul Kaser. Grandma Vera on right, Great Aunt Maude on the left and my grandfather Anderson in the background. 1940

All the usual tourist attractions drew our family members. Here’s Great Aunt Maude Bartlett at Niagara Falls with her brother Bill Stout, his wife Jean and Maude’s husband Carlos. The picture was taken early in the 20th century. (Love the hats!)  And then a later picture of Maude at Colonial Williamsburg, Virginia. 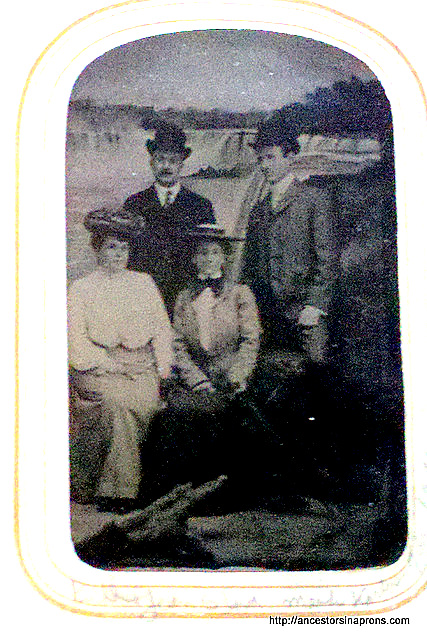 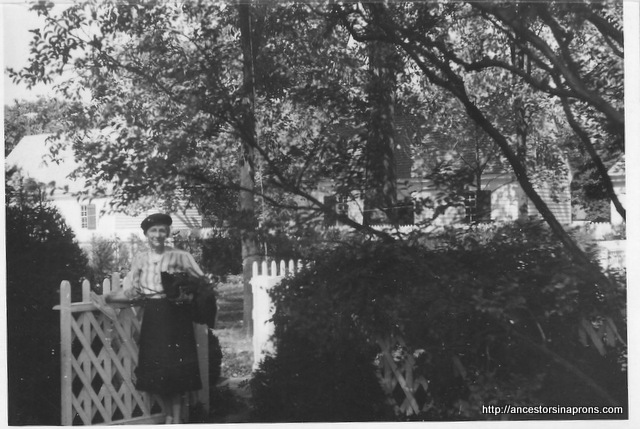 Grandma Vera loved travel with a great fervor, and whenever anyone had a trip in mind–across the country or to a nearby lake for a picnic, they would ask Vera to go along. 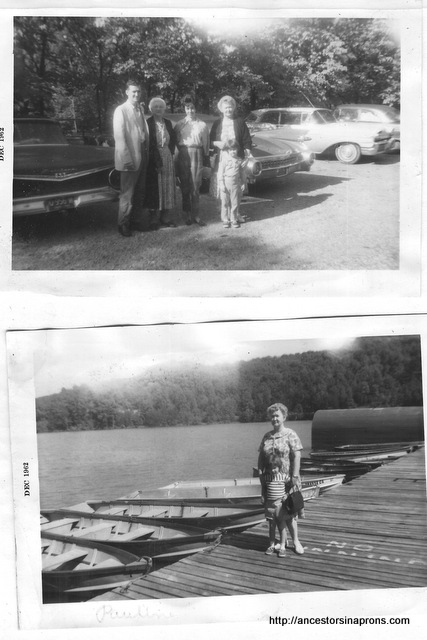 My father once said that Vera Anderson was such a traveler that if you said “we’re going…” before you got out the where, she’d say “Let me get my hat.”  He said he suspected that when she died, if someone walked up to her coffin and said, “Vera, we’re going…” she’d get up out of the coffin.

When Ken and I moved to Arizona, my mother and father were sorry to see us leave Ohio, but more than that, they were excited because now they had an excuse to travel west.  Ken and I and our three boys drove many times from Arizona to Ohio, always taking a slightly different route and stopping at different roadside attractions.

Ironically, when Grandma Vera died, Ken and I were on yet another road trip–this one to the 1964 New York World’s Fair. We drove back to Ohio where we learned of her death and stayed for the funeral. I kept wanting to walk up to the coffin and say, “Vera, we’re going….”