Note: WELCOME all Fair cousins (and all fair cousins as well). I hope you’ll add your memories of Rhema and Earl and also hope you’ll poke around and find stuff about Daddy Guy Anderson, Vera Anderson, Telmar Anderson, and other ancestors we have in common. Make yourself known to me. Love to meet relatives. I’ll be sharing a recipe from Rhema in December.

Rhema Anderson was the sour-looking little girl in the 1909 family picture. 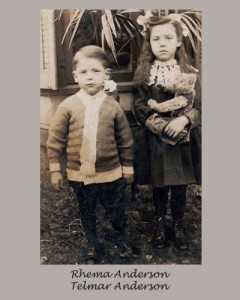 Telmar and Rhema Anderson, Photo from the collection of Kenneth J Fair at Ancestry.com

In fact, she didn’t look very cheerful in other childhood pictures, like this one with her brother Telmar.

No wonder the little girl was a bit grouchy.  Her mother died when she was 2 years old. When her father, Guy Anderson remarried a year later, she was sent to live with Franklin Anderson, Guy’s uncle. And when Rhema was eleven, Frank Anderson’s wife Sarah  Jane died.

Although she had contact with her father, and briefly lived with him, she must have felt like something of an orphan. I hasten to add that Frank and his wife Sarah Jane who had no children of their own, made a warm home for the little girl. But maybe Rhema just wasn’t suited for farm and farm community life.

When she was 18, Rhema became Rhema Anderson Fair when she married Kenneth Earl Fair (1898-1994). They lived  on his family farm in Clark Township, Holmes County, Ohio. Earl, who had 3 years of college,  taught school in Clark, and that’s where my mother, Harriette Anderson, had her first teaching job.

While Rhema and Earl lived in Clark, they had two boys–their only children. Rhema’s affection for Franklin Anderson, the man who raised her, was expressed when she named her first son after him.

You can see in this picture how tiny Rhema was. Mother may be standing slightly uphill, but she was never more than 5’4″, so Rhema Anderson Fair is about five feet tall. 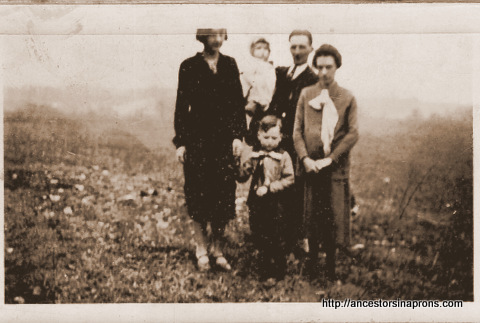 Some time around 1940, the Fair family moved to Kent, Ohio,  Rhema took a job at Kent State University  as a housemother at a dorm, and Earl finished his college education. (I assume he got free tuition since she worked at the University.) These two, who had always lived on a farm or in a small farming community, took to city life and the University milieu like they were made for it.

Earl went to work for one of the big rubber companies, and that’s where he worked until he retired, as Rhema climbed the administrative ladder at the University, winding up as head of Student Housing at Kent State University. She wasn’t just a good cook…it seemed to me was good at everything she touched.

She was intelligent and witty and cute, besides. She always had a beautiful home and she was one of my role models because like many of the women in our family, she had a career outside the home before it was a routine thing for women to do. 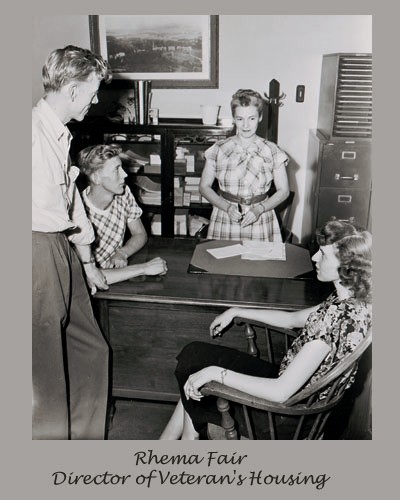 Rhema Fair at Kent State unversity. Photo from the collection of Kennth J. Fair at Ancestry.com

Always smartly dressed, and coiffed, she seemed to be a whirlwind of activity, known for her high heels clicking down the hallways, carrying the  5″2″ powerhouse around the campus. Since I had the same small feet that Rhema had, she used to send me shoes she tired of from her enormous collection, and bred a shoe collecting mania in her niece.

I remember one time proudly showing her everything in my closet, and she oohed and aahed over each dress and blouse, although in retrospect, it was not a very impressive collection.  She sent me the BEST Christmas presents–always just perfect for me–a purse, a scarf–perfume. Maybe I was the girl she never had (she had two boys) and that’s why she enjoyed sharing girly fashion things with me.

Her sour look in her early pictures could not be further from the cheerful, laughing Aunt Rhema that I knew. I remember her as  always interested in the person she was talking to, focusing her soft brown eyes on yours sympathetically. As a teenager, I felt that she understood me better than most adults. And maybe she did, since she worked with young people all the time.

When she and Earl retired, they left the lovely home they had built in Kent and moved to northern Arkansas  where Earl could fish and swap yarns with the locals.  They later lived with their son Frank and his wife Ruth in Pine Bluff, Arkansas.

Earl credited his long life to smoking cigars and drinking bourbon and branch water, and Rhema credited hers to keeping up with Earl. Their younger son, Dick, who died in 1968, at 43, did not have any children, but Frank made up for that. Rhema and Earl were very proud of their large family of grandchildren and great-grandchildren.

In December 1986 the family gathered in Pine Bluff for this picture. 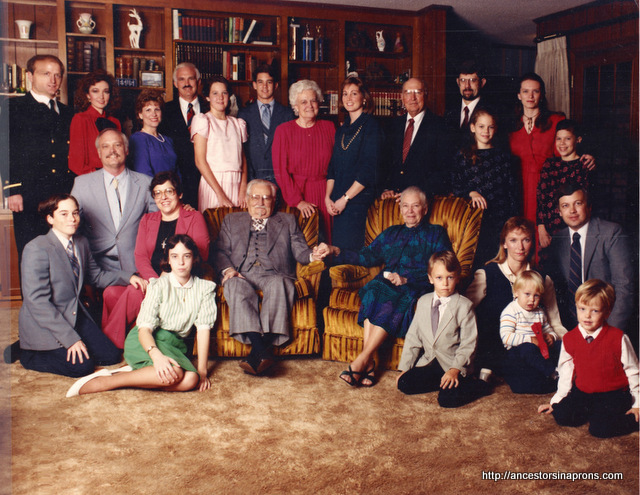 Rhema wrote a chatty letter to her half-sister Harriette Kaser (my mother) along with the picture.

“How’s this for progeny.  We even look sort of ‘smirky?’ But really aren’t they a good looking bunch?….Earl and I just ‘muddle’ along–We are well considering Earl is 89 yrs old and I will be 86 in July…”

She told where all the grandchildren and great-grandchildren are living and working and talked about some minor medical issues. But, really, hearing that Earl was 89 and Rhema is 86 made me look at the picture again.  Really?? 89??

Rhema passed away in 1996 at the age of 96, two years after Earl, who also had lived to 96.  Those are some genes to have in the family tree.

Oh, one more thing. In that letter to my mother that came with the picture. Rhema, known for giving fancy dinner parties and hobnobbing with the University set, says “I just made mush.  Earl wants mush and sausage gravy for dinner.”  There’s that gravy again. You can take the girl and boy out of the country, but you can’t take the country out of their cooking.

9 thoughts on “Rhema Anderson Fair, The Dynamo Who Inspired Me”