For this week’s Civil War era recipe, I am going to tell you about a dish Erasmus could have made in the field. Since we have a grocery store nearby and a kitchen to cook in, we have the luxury of upgrading it with a bit of an East Indian flavor but either way it is a Roots Stew recipe. 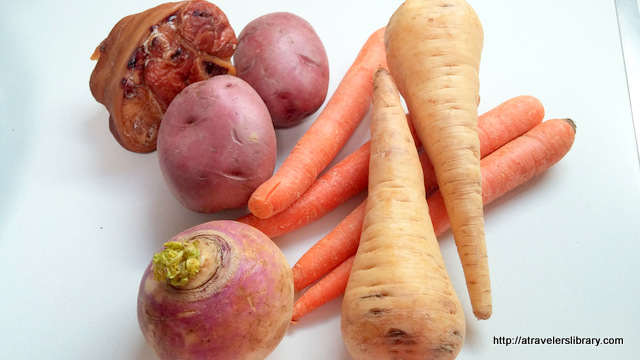 Yes, this is the 100th article in this website that makes a “roots stew” of searching for family roots and thinking about ancestor’s connection to food. We’ll celebrate by cooking up a roots stew recipe–because root vegetables were dependably under the ground as the troops marched south from Ohio. Despite the fact that the troops were forbidden to go foraging (otherwise known as pillaging) we know that it would be difficult to pass up a field of turnips or parsnips. Cpl. Wolbach has some very amusing stories about these forays into field and orchard.

I became closely acquainted with potatoes as I related when I gave you a scalloped potato recipe, but turnips and parsnips are not a regular on my dinner table. After looking at their nutritional benefits, I may add them more frequently, along with rutabagas, that I already put in soups whenever possible. They are very high in vitamin C, high in potassium and manganese and fiber and low in calories.  That’s a big thumbs’ up for humble root vegetables. 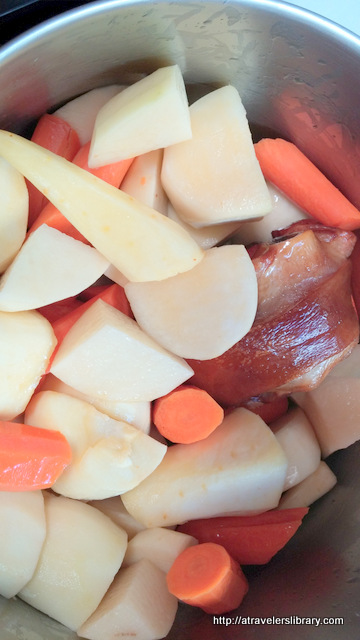 If Erasmus were going to make this roots stew recipe, he and some of his friends could just put a hunk of their ration of salt pork in the pot, maybe first cutting off some of the fat to grease the pot, then add whatever root vegetables the soldiers had been able to gather and pour in some water.

He would probably have some salt left from his weekly rations and could add that, and if any of the men had a knowledge of the wild herbs that grew in the woods, they might season the stew with some wild garlic, or some Judas’ ear mushrooms, some wild mustard seeds, or other free for the picking seasonings still available in the fall south of the Ohio River. (Once they get out of that snow he was complaining about in the last letter we read.) 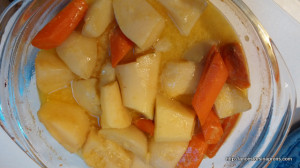 Can be made vegetarian or vegan by using olive oil and vegetable broth instead of bacon grease and chicken broth and eliminating ham hock.

The Holmes County Republican series entitled “Camp and Field” written b Cpl. Theodore D. Wolbach and published from February 1881 to August 1882 is available in image and transcription at the official 16th O.V.I. site.

by Billy Joe Tatum for suggestions on using wild plants.  For this and more cookbooks, see my food books page.