Today I will introduce my great grand aunt Caroline Anderson Bird (1846-1918), whose story is sometimes sketchy and confusing, but has one constant theme–sisterly love.

After detouring to introduce Erasmus Anderson last week, I am back to introducing the people in the picture taken at the Anderson farm in Holmes County Ohio in 1909. It was probably my Grandmother Vera Anderson’s 28th  birthday, May 23.

I admit to some confusion surrounding Caroline. For starters, my mother called her “Aunt Catherine” which had me searching for a non-existent person for some time. For another, I have no family stories about Caroline like I do about her siblings and parents. And most frustrating,many  records are missing. [UPDATE: Found the death record with her first name spelled as “Carolin”. She looks like such a calm, nurturing person in the photo, that I imagine she would not wish to cause confusion.

Family portrait. Caroline and Amy sitting side by side at the far left of the front row. 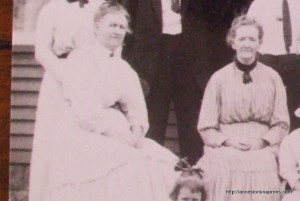 I mentioned Caroline before when I showed the Anderson family picture and related that mother told me that the two sisters, Caroline  and Amy Anderson Roof were inseparable. Although they look quite different in this picture, they lived parallel lives. They were 3 years apart in age, married within 2 years of each other, neither had children, and at one point they even moved to another state together with their husbands. Now THAT is sisterly love.

Amy (seen here on the right), was three years older than Caroline. When this picture was taken, Amy’s husband, Thomas Roof, had already died, but Caroline’s husband still lived.

Caroline was the youngest girl in the family.   Only Joseph (my great-grandfather who died before this picture froze the Andersons in time) and Frank were younger than Caroline.  She grew up on the Anderson farm in Monroe Township, near the Bird farms.  In the 1870 census, Caroline (23) is still living at home and Leonard Bird (21) is living in a hotel in nearby Millersburg.

The couple  had grown up as neighbors, and may very well have “double dated” with Amy and the young man named Bird that she was engaged to. Yes, the sisters were engaged to brothers. However, Amy broke off her engagement, as I related in her story, so the two sisters departed their parallel lives for once.  Leonard Bird married Caroline in November of 1870. Amy married Thomas Roof two years later.

(Although Caroline was the first to marry someone in the Bird Family, my grandfather Guy Anderson married Lillis Bird, who died very young.  In this picture, he is with his second wife, my grandmother, and their three babies, although his two children with LIllis–Telmar and Rhema are also in the picture.)

By the time of the 1880 census, Caroline and Leonard were living in Vermilion Illinois where he was farming and they had a hired hand living with them. Why Vermilion? Well, sister Amy and Thomas Roof  had moved to Vermilion, where Thomas was listed as a pharmacist. So apparently the inseparable sisters stayed together even after they were married–even though they didn’t marry brothers.

Both couples had returned to farms in Monroe Township, Holmes County Ohio by 1900. Whatever opportunities lured them to Illinois had lost their tarnish.  Caroline’s mother, Isabella Anderson (then 81)  moved from the home of Caroline’s brother William and was living with Caroline and Leonard. By now he was 50 and she was 54 and they  never had any children, so they were no doubt better situated to care for Isabella, who was losing her eyesight, than were William and his wife who had four children at home.

Back to the confusion about Caroline–I do not know why Leonard was not present for this family picture, since he was still alive.

It is possible that Leonard Bird was not at the Anderson farm that day because there was bad blood between Leonard  and my grandfather Guy Anderson. Guy is in the top row wearing a white shirt and skinny tie, and my grandmother, Vera Stout Anderson is directly below him, holding their youngest child.  Vera was Guy’s 2nd wife, but his first wife was Lillis Bird, a half-sister to Leonard.  According to one my relatives, some members of the family thought that Guy cheated on Lillis Bird and “she died of a broken heart”.  They greatly disapproved of his second marriage.

Or maybe I’m speculating too much and Leonard just was ill that day. Could be that the fact that it was Vera Anderson’s birthday had nothing to do with his absence.

The 1910 census shows Amy and Leonard still living in Monroe Township–just the two of them. However,Leonard is listed as a widower in the 1920 census, so Caroline died in the same decade as her sister Amy, who departed in 1917, based on a story from my mother, Harriette Anderson Kaser and the fact that Amy was in a photograph of the Lisle family, taken in 1916.

I have found  no tombstone for Caroline, and have no family stories that shed any light on whether Caroline or Amy departed first. There is no question that the two sisters were examples of sisterly love all their lives, so it seems only appropriate that they died within years–if not months–of each other.  UPDATE (Oct 2017):  The death record, spelling Caroline’s name incorrectly as ‘Carolin’ finally popped up on Family Search. She died 12 April, 1918 in Holmes County, Ohio.

FURTHER UPDATE:I also have learned from probate records that Leonard remarried before he died in 1925. It was a short marriage, since he was a widow in 1920’s census.  He was married in his family’s Weirich plot in Orrville Ohio. Still no record of Caroline/Carolin’s burial place.