Great-Grand-Uncle, Franklin P. Anderson (1852-1926) stood in the center of the large family photo taken in 1909 with his hand on the chair of his mother, the matriarch of the clan.

Family portrait. “Uncle Frank” Anderson with his magnificent mustache, stands in the center of the family portrait with his hand on the chair of his mother, Isabella Anderson

It is very appropriate that Frank would occupy this position of honor.  Although Frank Anderson was the next to youngest of the children of John and Isabella Anderson, he shouldered a great deal of responsibility. When Frank’s brother, the father of Leonard Guy Anderson, died young, Frank and his wife Sarah Jane (Brink) Anderson took in his nephews, five-year-old Guy and his brother, one- year-old Ben (Bernard Franklin) and cared for them. Sarah Jane stands to the viewer’s left of Frank in this clip from the larger picture. 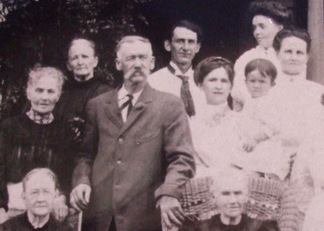 Frank, like  three of his half-siblings and five of his full siblings (the oldest half-sister had married before his father’s marriage to Isabella and move to Ohio from Pennsylvania), grew up in Monroe Township, Holmes County, Ohio, on his father John Anderson’s prosperous farm. By the time he was nine, only his sister Amy and his younger brother Joseph were still at home.

When he was nine years old his brother William joined the Union army, and the following year his oldest half-brother Erasmus joined. When he was eleven,  the family received word that Erasmus had died in the battle of Vicksburg. Frank, too young to go off to war, was a farmer for about the first fifty years of his life, on a farm adjacent to his father’s.

My mother recalled Frank and Sarah Jane running a store in Welcome for a time, and there was a family story that the Welcome Church of Christ first met in their store.  I don’t know the truth of that, but I do know that they were devout and devoted supporters of the church.

Later, when Guy’s first wife Lillis Bird Anderson died in 1903, shortly after giving birth to her first child, Frank took in Guy’s daughter Rhema and raised her. In the 1910 census, Frank and Sarah Jane were living on Main Street in Killbuck with Rhema (spelled Roma in the census). Neighbors on Main Street included Sarah P. Leguillon, divorced mother of three children still at home  and Amy Anderson Roof with their mother Isabella aged 91. Frank was supporting his household with house painting, which he continued to do, according to the census reports, well into his 60s.

Both Frank’s mother and his wife died in 1912.  Frank’s sister Amy (who was by then a widow herself) moved in with Frank and helped with the care of pre-teen Rhema Anderson until Rhema Fair moved out and married Earl Fair in 1920. 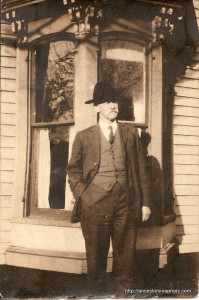 By the time of the census of 1920, Frank, now 67,was married to Sarah P. (Shrimplin Leguillon) who was a few years older than he was. So his house was once more full with children not his own–21 and 23 year-old sons of Sarah P. Leguillon Anderson, and her grand daughter who was 12.

Although Frank never had any children of his own, at one time or another he took responsibility for the care of six children of others. And he must have been highly respected, as many relatives took his name for their children.

Before doing this research, I did not suspect that he remarried after the death of Sarah Jane. So this has been a voyage of discovery, although I never did discover what the “P” stands for. 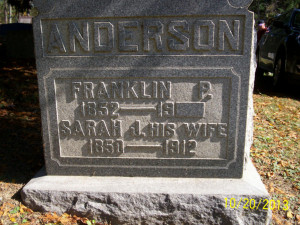 Franklin P. Anderson died July 26, 1926 and is buried in the Welcome Cemetery in Monroe Township, Holmes County, Ohio. Notice that the tombstone was never completed with the year of his death.

If you are visiting from #52Ancestors, I would like to mention that I started introducing ancestors a few months before that project started. If you use the search box on the right, or browse through old posts, you may find some of those I list below. I have now worked my way through introductions to 16 of the 28 people in the photo above. I have introduced my

There are other people who were not in this picture–perhaps died before the picture, like Erasmus Anderson or perhaps not members of the family yet, like Aunt Sarah Warner Anderson–that I have also introduced.

I am incredibly grateful to my mother and to Aunt Rhema  for labeling this picture and telling me the stories that went with the people in the picture. If all of us had the sense of the importance of history that those two sisters had, we would have a much easier search for family history.