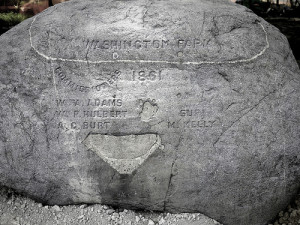 ” Dear Suzi, We came here last night and are lying around in what is called Washington Park. It is a beatuiful place in the middle of the city with a nice fountain in the center full of fish and nice flowers, shrubs and trees, lots of pet squirrels playing around”

Erasmus Anderson enlisted in the Union Army in August 1862 and mustered into the 16th Ohio Volunteer Infantry (OVI) at Wooster Ohio. It was a year after the first great recruitment efforts with public rallies and speeches, but the war was not ending as quickly as the Generals had thought, so a second push was made for volunteers.  Since Erasmus was 32 years old and had a wife and small child, he does not seem a likely recruit, but his first Civil War letters to his wife Suzanne, shows his enthusiasm for the task ahead.

Erasmus and other men from Holmes County were assigned to Company E. From Wooster the troops went to Columbus, Ohio, and then to Cincinnati where they would be trained at Camp Dennison. Erasmus didn’t think much of Ohio’s capitol city.

…but oh this is not Columbus.  God curse that hell hole.  They would not even board us and when they came to see us it was to cut the money out of our boys pockets while asleep or sell them provisions at an awful high rate, anyway at all to get our money.

Cincinnati was a different  story, he explains, because the residents were afraid of invasion because of their important position along the Ohio River and at the center of railroad transportation, and were therefore welcoming to the soldiers. He continues his description of Washington Park. (Note: a ‘nigger head’ is apparently a large water container.)

…for spring water we have a beastly big nigger head with holes bored in it and corks to draw water out, while little girls and boys and babies are playing around us and kind hearted women are sewing our clothes and gives us good things to eat.

Washington park, that he describes here, had been constructed just one year before in the area known as Over-the-Rhine.  You can still visit Washington Park, now refurbished for a modern age.  Erasmus is pretty happy hanging out with his buddies at Washington Park. As he does in many of his letters, he mentions food.

Here the women and children are coming and filling our canteens with good coffee and giving all that is good to eat.  I could willingly die for such people; while we draw our regular rations at the market house.

I italicized a phrase that makes me sad every time I read it, since I know that Erasmus did indeed die for these–and other people.   But in September, he is just beginning the adventure, and fortunately, he cannot see ahead.

The boys are all well and in the best of heart and would willingly fight if they only knowed how but we would be of little service as we are not drilled as much as we might be or would like to be.  I like it first rate and hope we will soon get through to the gap for I am uneasy about them boys there.

“the gap” that he mentions is the Cumberland Gap. From October to November 1862, the OVI 16th was assigned to the 4th Brigade, Cumberland Gap Division.  So while, the soldiers frequently had no idea of the larger picture they were involved in, Erasmus apparently knew that he would be going through “the gap.”

I don’t believe we will attempt to go through until the way is open as we have drawn no arms and I don’t think we will till we get to the gap.

We’ll hear more in subsequent letters about the problem with not having enough weapons to go around. On next Tuesday, I will be speculating about what food those kind women were serving the soldiers.  And next Friday, excerpts from Erasmus’ second letter, which he wrote in October, from Camp Dennison, the training camp, just north of Cincinnati.

Notes:  This series of Erasmus Anderson’s Civil War letters is definitely a group project. First I must thank the owner of the letters, who kindly sent me the transcript of the letters, and allowed me to learn about Erasmus.  Second, my brother and sister know far more about the Civil War than I do, and they are helping me with the background information on Erasmus the soldier.

Besides the Civil War letters, sources here include