In the first letter we have from Civil War soldier Erasmus Anderson, he effuses about the food served by the women of Cincinnati when he is stationed there. I have tried to imagine what those ladies in Cincinnati were serving the Union Soldiers, and decided Green Tomato Pie might be on the menu. 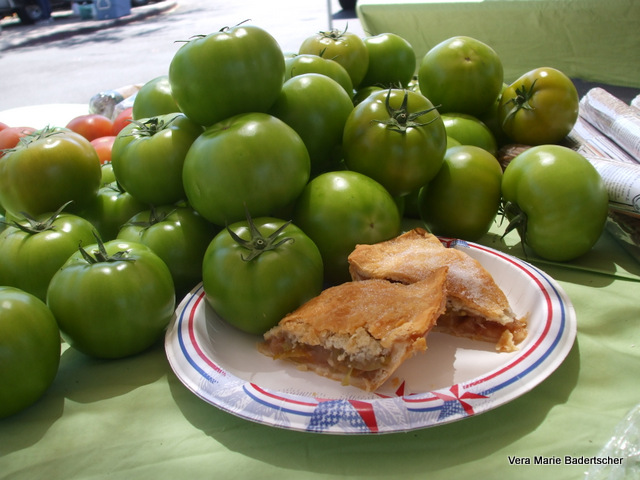 It is easy to understand why they were so friendly and cooperative in Cincinnati. The city sits on the northern side of the Ohio River, which was looked upon as the last big barrier for escaping slaves. The Underground Railroad was active there, and although there were dissenters,  most citizens were united behind the Union.

Unlike the residents of the South, where the first year of the war had already decimated food supplies, Cincinnati was well connected by railroad and river to trade to the East and North.  And the state of Ohio continued to produce ample food during the Civil War. Here is what I can surmise about the food that might have been available when Erasmus was stationed there.

German Influence: Cincinnati itself was heavily populated with Germans , so the food would have been German-influenced. Camp Dennison, where the recruits were trained, (Letter two) was actually a bit north of Cincinnati in a town called New Germany.

Ham and Cheese: Two commodities always available, and always on the plate at any gathering in the German areas of Ohio. The soldiers could have been served up thick slices of ham on home made bread. Sausage and kraut would have been on the menu, too.

Beer: The city had numerous breweries, so the soldiers were not going without beer.

September Harvest Time: Farmers would be getting in the last of their crops, and housewives would be pulling off the plants and out of the ground the last of their summer garden. It is sweet corn and sweet red tomato time in Ohio in early September.This is where the green tomatoes come in. The growers must get them off the vines before the first frost comes.

Canning Time: Because of the surfeit of vegetables and fruit, canning would be in full swing, and the soldiers could have been treated to some newly canned peaches or piccalilli or strawberry jam.

Had the soldiers been able to foresee the limited diet they had ahead of them, they might have taken more advantage of fresh produce.  At any rate, we know that Erasmus enjoyed the food and hospitality of the ladies of Cincinnati. And we speculate that green tomato pie might have been among the treats they served.

Some people say that green tomato pie tastes like a tart apple pie. Perhaps, but to me it more closely resembles the sweet and sour combination of rhubarb pie, so I made it the way I make rhubarb pie, with tapioca.  Even people who start out skeptical, wind up loving this pie. (See the Perfect Pie Crust recipe here.) 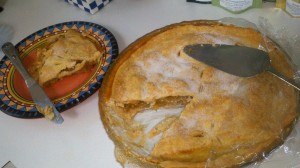 The filling will be runny, which is why you put it in the refrigerator. You could pour off some of the liquid after mixing the tomatoes and sugar, but lose some flavor.