My opinion is this war began dishonorable and it will end so.  I don’t believe we can whip them for from all accounts we are getting worsted everywhere.

Erasmus is despondent. The smell of gun powder, sweat and blood haunt him. His ears are probably still ringing from the barrage of guns. Friends are wounded and dying on a hospital ship on the river that tends the Civil War wounded. His company has, for the first time, been engaged in a full fledged battle with the enemy, forced to retreat, and he’s ready to throw in the towel.

..we have all went through what we don’t want to see again…There is no use in  me giving you any particulars of it for you can see it in Jim’s letters.

Note: I have not determined for sure who “Jim” is as there were many men named James in the regiment.

The 16th Ohio, part of General Sherman’s forces, engaged in a vicious battle at Chickasaw Bayou. Since Erasmus concentrates in his letter on the aftermath, here is an outline of what his life has been like since his last letter home from Memphis in December. 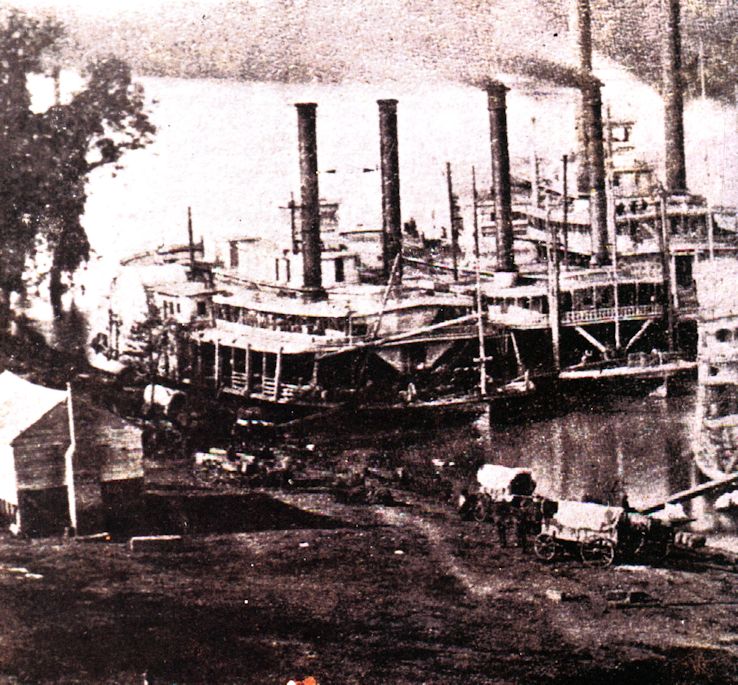 Steamship supposed to be Fanny Bullitt, used to transport Union soldiers of the OVI 16th Regiment during the Civil War. Photo from web site of Michael K. Wood

On December the 16th, the 16th O.V.I. board a side wheeler steamboat called Fanny Bullitt and join a flotilla of 60 boats on the Mississippi sailing south from Memphis. What a sight that must have been! On December 22, they reached the mouth of the Yazoo River and proceeded up that river. According to Cpl. Theodore Wolbach’s Camp and Field, published in the 1980s, Yazoo in “the Indian language” means River of Death.

There are no thoughts of Christmas as they alight from the boats on the 25th and 26th in daunting swampland and a forest of fallen timber. A book by a man who fought in the battle, A History of the Organization and Services of That Regiment In the War of the Rebellion 1876 by F.H. Mason described the surroundings as “quagmire of varying width and unknown depth.” And Wolbach does some of his most vivid reporting. (To read these accounts and more, go to the Michael Wood’s excellent web page. )  Now from Wolbach:

The 16th stacked arms in a large turnip field near the edge of the road that (ran) along the (Chickasaw) Bayou. Across from us was the gloomy, vine-tangled forest. From the branches of the trees hung the gray Spanish Moss in abundance.” Wolbach. 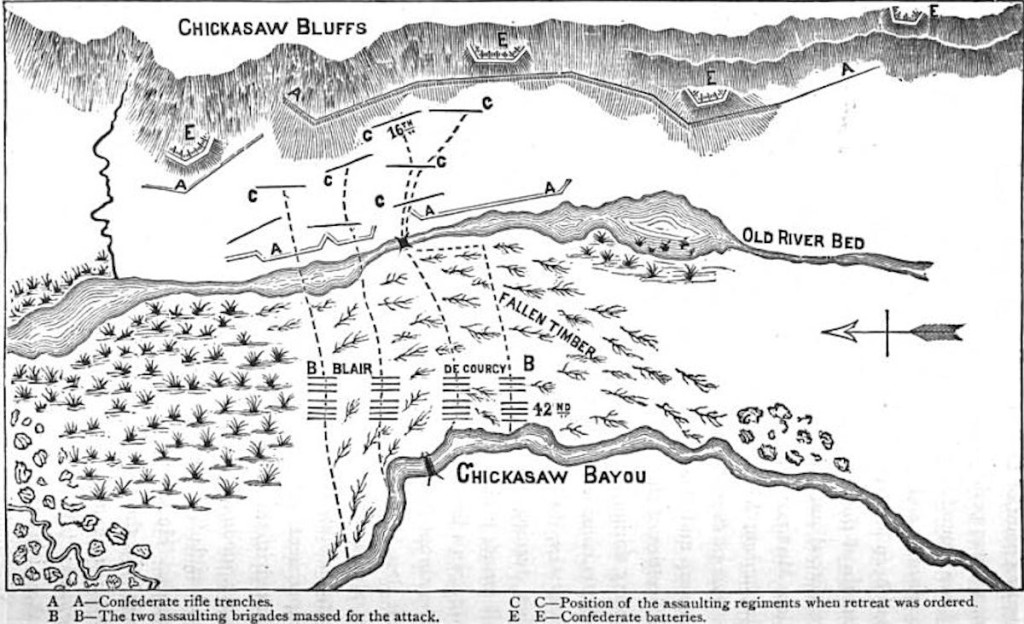 Chickasaw Battle Map, showing 16th Regiment in advance and their movements across swamp and fallen timber.

Mason says that their 3-4 day delay at the mouth of the Yazoo allowed the South to bring in reinforcements. Col. DeCourcey, the experienced British soldier who was leading the 165th OVI, argued that the mission was impossible. However, General Sherman surveyed the land and was not happy, but reportedly sent a message, “Tell Morgan that I wish him to give the signal for the assault; that we will lose 5,000 men taking Vicksburg and may as well lose them now.”

The battle routes superimposed on today’s terrain as shown by Google Maps and illustrated on Michael K. Wood’s website. The Mississippi changed its course about twenty years later, and the Corps of Engineers changed the course of the Yazoo River. 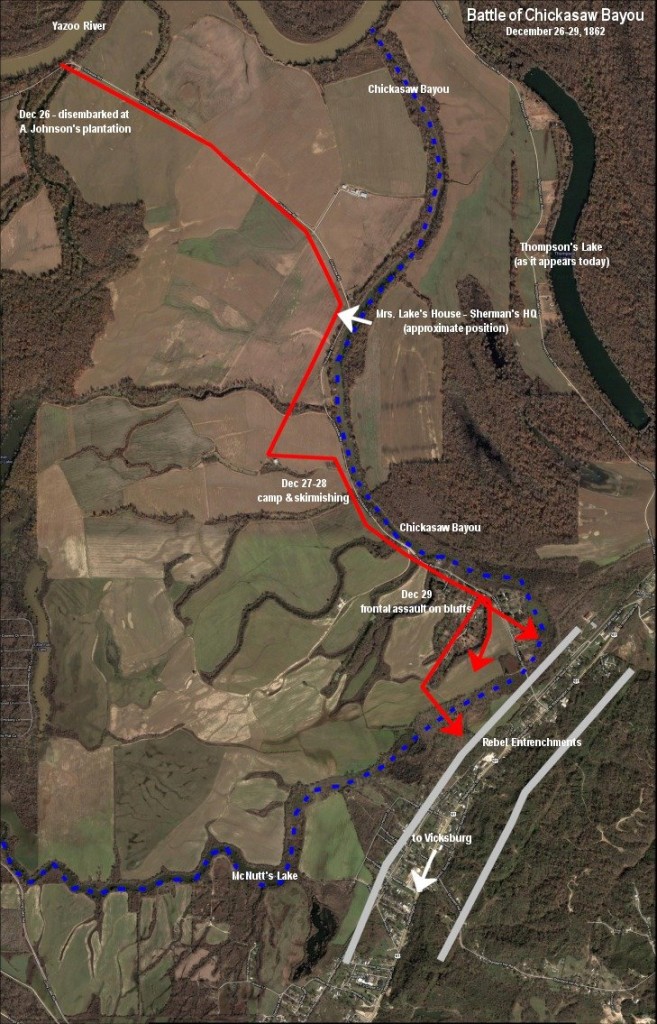 A Chickaswa Bluffs terrain map showing the route of the 16th OVI overlaid on today’s terrain. Thanks to Michael K. Wood website. Michael says, “I have outlined the current route of Chickasaw Bayou in blue and show the route taken by the 16th and DeCourcey’s brigade in red from Dec. 26 thru the morning of the 29th (I have not shown the locations of the many other units on the field that day).”

See many more maps and narratives of the battle at the 16th OVI website.

The 16th O.V.I. regiment was in the front of their brigade–1500 Union men all together in the brigade, as they crossed a narrow bridge. Another brigade of 2000 men paralleled their movements. They fought on the 27th, 28th and 29th.

“The next morning, the 30th, found the 16th lifting their chilled and benumbed bodies from a muddy bivouac in an old cornfield. When we were in ranks, in column of Companies, the havoc of the fight was painfully visible. One Company, (K,) had only fifteen men present all told. Some of the Companies had no officers.” Wolbach

On the 30th, the Union officers requested a truce so they could remove their dead, and the Civil War wounded, but the Southern commanders refused. Finally on the 31st, the Union troops put up a white flag. On January 1, they get back on the boats and head toward Millikin’s Bend as the officers plan an attack on Arkansas Post. 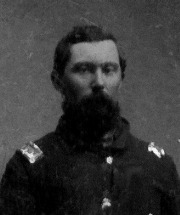 Col. DeCourcey, the commander of the 16th, lost 580 men. So many men were lost that they reorganized from ten companies to six.

“The days that immediately succeeded the Yazoo expedition were dismal ones to the 16th boys, but they soon recovered their buoyant spirits and those that were left were as good as ever. ” Wolbach

Typically, Erasmus does not go along with Wolbach’s optimistic outlook.

“Our regiment is half gone and the rest will leave as soon as they get the chance.  They are the worst dishearted set of men I ever saw in my life.”

As Erasmus writes his letter to his wife, he is still trying to absorb the horrors of the previous week.  He is back on the Fanny Bullitt steamship, and headed, he probably suspects, for another battle.  What we see in this letter, though, is his compassion for his friends.

He hopes that Will (his brother) is prisoner, and indeed that is what happened. A very large number of Union men were pinned down by fire and then taken prisoner. Some were released within a few weeks and others held for several months.  Erasmus’ main concern is for Ephraim Cellars, an he tells and interesting story about trying to get on the hospital boat to check on friends.

I was awful afraid of _____ for awhile but I have hopes of his recovery now.  If I could get to stay with him and take care of him I would like it but we are not allowed to go on the boat where the wounded is at all.  I think it is pretty hard but I can’t help it.  The day the charge was made a wounded friend of mine sent word for me to come in the hospital and take care of him but when I came to the door the guard asked me if I was wounded.  I was lame from a burn but I told him no and he said I could not go in.

(I have included pictures of that very boat and more information about the care of the Civil War wounded in the next post. See it here.)

We never learn how badly Erasmus was actually burned–whether he is making little of it in order not to worry his wife, or whether it really is not serious. At any rate, he, who is an upright and honest person, has learned he may have to dissemble a bit.

After a little I heard Ephriam was in there wounded and I was determined to go in and when asked this time if I was wounded I told him slightly and I passed in and I went in all through and looked at every man, but his wound had been dressed and took to the boat as they all were as fast as they could.

This seems to indicate that he went looking for Ephraim on the 30th, the day after the big charge, and in fact Ephraim was wounded on the 29th.  Apparently the army had a building where they first treated the wounded before moving them to the hospital ship.

Erasmus is so determined to see Ephraim that he tries everything he can think of.

I could not go to the boat without a pass from the doctor.  I got leave from the captain but I could get no pass.  I thought I would try another plan.  I took a knapsack belonging to the wounded man but that would not do so I got in a covered wagon and hid myself and got through the guard line to the boat with my knapsack and the persuasions of a friend on the boat I succeeded in getting on to see him.

He goes on to say that he thought he (Ephraim) would die, but has now heard reports he was better.  Erasmus is concerned about Ephraim’s father, “Uncle Joe”, and how the family would take the news.

He has mentioned Ephraim Cellars before, and the soldier’s father, “Uncle Joe”. I am still trying to piece together the relationship, but apparently there is a tie between the Cellars family and Erasmus’ wife, Susan/Susanna Frazer Anderson.  Ephraim was drafted at the age of 18 in August 1862. He is the only boy in a family with five girls.

Sadly, Erasmus does not yet know that Ephraim, wounded on December 29, died on January 1–four days before Erasmus sat on the Fanny Bullitt writing to Suzi.

Erasmus  is longing for some news from home, but says he has not heard from Suzi since before they left Memphis, and she is “not doing right.”  He closes with

I would like to know how you and them little boys is getting along this cold weather.  No more, but may God protect you.

Notes: Besides the Civil War letters which I use with the permission of a descendant of Erasmus’ widow and her second husband, sources here include:

If you happen to know more about Ephraim Cellars and his family, or any of the other men who served in OVI 16th, particularly companies E and B, please share below in the comments.

The next letter, #7,Civil War Deserters, is here