Oh well, I should not complain. I have this wonderful family photo, which you may be tired of looking at, and my mother, Harriette Anderson Kaser and aunt, Rhema Anderson Fair took the time to label all the people and tell some stories about them. Today I am going to tie it all together and put it away in the drawer, so just a little more patience, please.

Twenty-eight relatives of Guy and Vera Anderson gathered in 1909, apparently to celebrate the birthday of Vera Anderson, May 23, when she was 28 years old. (There is also the possibility it was taken on April 8, when Herbert Guy Anderson was one year old.)

My mother remembered the house with love approaching awe.

The house was on Mile Hill outside Killbuck.  Originallly owned by Dr. Roof.  Harriette Kaser thinks that Ben Anderson (Guy’s brother, Bernard Franklin Anderson) bought it form Dr. Roof and then Guy Anderson bought it from Ben and owned it at the time of the picture.  She said that Garfield Woods bought the house from Guy Anderson.

“When Dr. Roof bought the house they planted a big orchard.  Amy and her husband Thomas Roof traveled all over the world, and that’s why they sold it.  When I was little, I had a playhouse in back.  The house had beautiful woodwork and had front and back staircases–the back one for the maids.  There was a big barn, way off from the house.  In the back there was a brick house where they kept food. [Probably a spring house.]

The top of the hill had a beautiful view.  In the picture, you can see they are sitting and standing on a cement sidewalk. It stretched around a huge lawn and down to the driveway.”

While it was unusual to have a cement sidewalk out in the country, Rhema Fair, in her videotaped memoir explained that it was even better than that.  The Roofs liked to go to Florida and they brought back seashells which they embedded in the cement on the edges of the sidewalk. In front of the house they used seashells to spell out ROOF.

The house still stands in the same place, and is very recognizable. 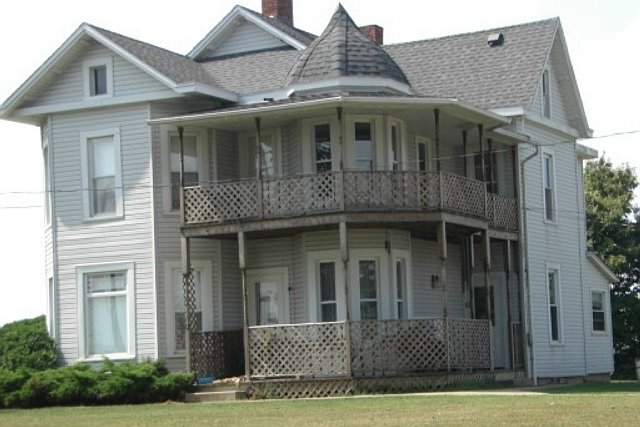 (WARNING: If you are not related to these people, you may want to stop reading before you run into a bunch of names and dates)

Below I have linked stories I have told earlier, and given a little information about each person, including their relationship to me and to my grandfather or grandmother and their immediate family. Starting with the children on the ground in the front, left to right:

Caroline Anderson Bird (1846-1918), Daughter of John and Isabella Anderson. Aunt of Guy Anderson . Married to Leonard Bird. For some reason, my mother called her Aunt Catherine. My great-grand aunt.

Amy Anderson Roof (1843-1917). Daughter of John and Isabella Anderson. Aunt of Guy Anderson.  My great-grand aunt. Both my mother and aunt remember Amy’s beautiful long red hair, and the fact that she and Caroline were inseparable. She and her husband were known as great travelers, and Aunt Rhema remembered her as the greatest influence on her young life.

Margaret (Marge) Anderson Lisle. (1827-1917) Daughter of John and Isabella Anderson. Aunt of Guy Anderson. Caretaker for her own children and several grandchildren. My great-grand aunt.

Isabel Sarah McCabe Anderson. (1818-1912) Widow of John Anderson. Grandmother of Guy Anderson.  My mother thought she came from Scotland with her family, but in fact it was her grandfather who first came to the U.S. She married John J. Anderson and moved to Ohio from Pennsylvania against her family’s wishes.  My great-great-grandmother.

Doctor William Cochran (Doc) Stout (1845-1910) Son of Isaiah Stout and Emmaline Cochran Stout. Father of Vera Stout Anderson. My mother said that this picture must have been made after he had a stroke, because he has his cane with him. He died within a year of the photograph, on August 18, 1910. My great-grandfather.

DeSylva Allison (1863-1941). Husband of Adda Brink Allison, uncle of Guy Anderson. He was sheriff of Holmes County at one time. My great-grand uncle.

Frank Anderson (1852-1926), Son of John and Isabella Anderson. Uncle of Guy Anderson, and the man who raised both Guy and Guy’s daughter Rhema. My great-grand uncle. Frank and Guy’s father married sisters. Frank and Sarah Jane were another couple who traveled a great deal, said mother, going West long before most people did.

Vera Stout Anderson (1881-1964), wife of Guy Anderson and my maternal grandmother and namesake.

Leita Allison (the short woman) (1887-1955) Aleitia Larrimore Allison was married the year before this picture to Errett Allison, cousin of Guy Anderson. She worked on Guy and Vera’s farm.

Alice/Ada McDowell (?) Mother identified this woman as Ada McDowell, but I cannot find an Ada McDowell that fits. On the back of the picture mother had first written Jennie McDowell, then changed it to Ada.

It is possible that the woman is Alice McDowell, mother of Jennie King, since Jennie seems to be looking in her direction.  If that is the case, Alice McDowell Eyster (1858-1910) was the daughter of Sarah Jane Anderson McDowell and James McDowell, she was a widow, living with George and Jennie King, and died the year after this picture was taken. Alice McDowell was my first cousin two times removed.

Mary Brink Anderson Kline (1858-1935) Standing in front of post to the right of Vera. Mother of Guy Anderson, widow of Joseph Anderson. Sister of Sarah Jane Brink Anderson and Adda Brink Allison.  Remarried a man named Kline after being a widow 40 years. My great-grandmother.

DO YOU KNOW MORE?

As you can see there are still some gaps in my knowledge here, so I would appreciate any input if you can add information on any of these people.

The photo, in the author’s possession has names written on the back in Harriette Anderson Kaser’s hand.  She told me in a conversation in 1999 that she and Rhema Anderson Fair had made a tape about the people in the picture and noted the names. The tape is missing.

My cousin Herbert Anderson gave me the picture of the house at it stood in the early 2000’s. Another cousin gave me information about Jennie King and her family.

Birth and death dates are from documents found at Ancestry.com