In tomorrow’s 52 Ancestors Story, I talk about a journey that my mother’s family made annually from Killbuck, Ohio in Holmes County to my grandmother Vera Stout Anderson’s relatives in Guernsey County. Instead of food this week,we’re talking about a journey in an antique car.

Mother (Harriette Anderson Kaser) mentions in her story that her great aunt Elizabeth Stout “Lib” Cunningham was a terrific cook, but unfortunately, she doesn’t tell us what Lib cooked.  Instead she remembers all the details about every antique car, the road conditions and travel directions. Even though my mother was a home economics teacher for many years, she was always more interested in cars than in food preparation.

In her eighties and nineties, she could lovingly describe every car she ever owned.  And Grandma Vera Anderson and Grandpa Leonard Guy Anderson started driving cars as soon as it was feasible.  After the ones named below, in the late 20’s they owned a Stutz, which you can see here, in Road Trip Adventures with Family Travelers. My uncle Herbert Anderson posed beside that car in 1927. 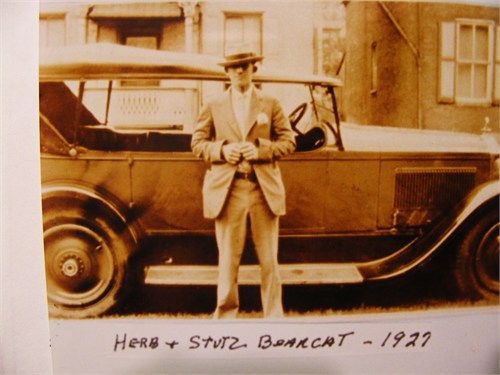 In her story that I relate tomorrow, Mother describes the red Maxwell Runabout that her parents were driving when she and her brothers were small.  From the pictures I have been able to find, theirs was probably a 1912.  Mother describes a round gas tank in front of a luggage box and that is missing on the earlier models I’ve seen pictures of, but it is present in 1912. Nevertheless, here’s a picture of a 1911 Maxwell Runabout, because I like to picture my Grandmother and Grandfather and their three small children in this bright red car. 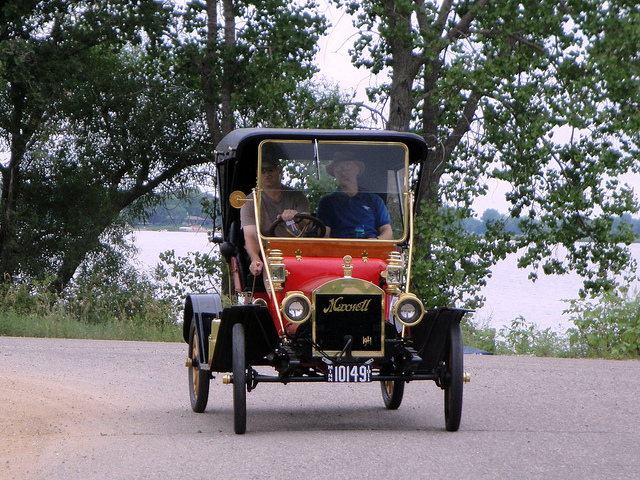 Mother tells another story about a  later trip to Guernsey County, in another car, the Saxon. The Saxon was harder to find pictures of (with use permitted), but here’s one that was for sale. It is a 1917, which was no doubt more practical, although not nearly as much fun. 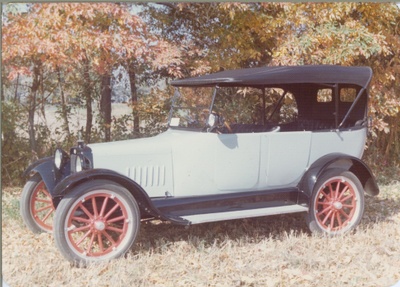 Here’s my mother’s story of a trip that went wrong.

“One time when we decided to go to Guernsey County, we had just gotten a new Saxon car.  We were pretty good chunks of kids by this time, pretty good size, and Grandma Stout was going with us.  Now Grandma Stout was a little bit like our mother.  She was a good traveler.  She liked to go and she never complained on a trip, no matter where she went or how uncomfortable she was.

“We got down on the other side of Newcomerstown on this trip and it started raining.  It poured and it poured, and we started up a little hill–not a very big hill–and dad had to change gears.  When he changed gears, the rear axle broke on the car, and there we were –stranded in the car.  It was night by the time we got that far because we’d been so slowed down on the mud roads. They were mud roads out of [south of] Newcomerstown.  They had no pikes. [paved roads]

“We looked out across a field and there was a light in a farmhouse out across the field and so …Dad decided that maybe we should try to get over there to get out of the car because we couldn’t stay in the car all night and he couldn’t see to do anything with it. So we started walking.

“By this time the rain had slaked up a little bit, but it was wet and so messy.  We started walking and we came to a little stream and Grandma didn’t see the stream and she fell. We thought that she would be hurt, but she got up laughing and thought it was a really good joke that she had fallen the stream.

“By this time the storm was over, and it was getting moonlight.  It was rather nice, and we could see. When we got to the farmhouse, we realized that we were not at any palatial place.  It was probably nine o’clock by that time.  The people were so nice.  They were quite poor. You could tell that, but they tried so hard to accommodate us and find sleeping [places]. …there were my brothers, my Grandmother, and my dad and mother and I, so there were six of us dropping in on these people, and this poor farm lady put every one of us to bed.

“I don’t know how any of us slept very well.  I think I did.  If I’m not mistaken, I slept with two girls that were in the family, and Grandmother slept in a bed with the hired girl. She said [later] that the bed didn’t smell very good, and Grandmother was pretty particular anyway.  She’d have been willing to sit up all night, but she knew that would offend the woman.  And Dad and Mother had a bed, and the boys shared a bed with their son.”

In looking for pictures and information about the Saxon car, I came across a site dedicated to Saxons and their collectors.  They have a story there, The Suffragist Saffron Saxon, about a Suffragette who traveled across the country campaigning for the woman’s vote.  Since Grandma Stout read the New York Times, sent to her by her son Will, I like to think that she read that story and it influenced the family decision to buy a Saxon.

Of course I can’t provide concrete evidence, but the circumstantial evidence is strong. We know her son who lived in New York, sent her the paper. We know that her greatest desire was to live long enough for women to vote. And we know she was not bashful about expressing her opinion.

Perhaps she would have changed her mind after the night of the road trip gone wrong in this antique car.

“Harriette Anderson Kaser’s Memories of Killbuck, Ohio in the late 1800′s and early 1900′s” were transcribed from an audiotape recorded in the home of P. W. Kaser, Fresno, California about 1980.  Paul William Kaser, her son, made the transcription.  Vera Marie Kaser Badertscher made slight edits.

Added material was taken from other notes of conversations with Harriette,