Undated * letter written aboard a boat on the Mississippi River.

Suzy, last night I was out on picket and it rained a good steady cool shower of rain all night and put me in a good condition for a cool reflection.

My brother, P. W. Kaser, who experienced picket duty in another war, comments.

“He rises to a kind of eloquence and revelation at the beginning of [this] letter. For soldiers in all wars, picket duty alone in the rain is typically a chance for what Erasmus calls ‘cold reflection.’ It’s almost as if someone else, calmer, less angry and depressed, is writing this passage, but clearly he’s experiencing a significant moment of recognition. Did he foresee his death and eternal rest or just dream of coming home to “Suzy” in Ohio?“

Erasmus has come a long way since he earlier wrote:

I thought of everything from my childhood up and through a great deal of my present condition.  A poor half fed, dirty, lousy soldier in the dark woods of Mississippi.  I compared it to my comfortable little home in Ohio where I might have been with my little family in a warm bed and something fit to eat when I wanted it.  I lost my rubber blanket at Vicksburg and the rain had a good chance to bring me to my senses.  If this doesn’t kill me it will teach me when I get back to that little family I will know better than to leave it the next time.

Erasmus sets the stage for us to envision his present life as a boat transports the soldiers down the Mississippi in two telling sentences.

Jake Lint and me is sitting together in a wagon bed down in the hold where we sleep.  I am writing to you and he is peeling some sweet potatoes by the light of the same candle. 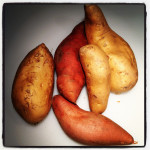 Erasmus, by the way, is ecstatic about these sweet potatoes.

You ought to see them, they are about half as long as your leg and as thick as your thigh.  We had a good mess for breakfast and are going to have one for dinner.  If we did not get out and get something now and then we could not live.

In an earlier letter from the camp in Memphis he mentioned this same companion, Jake Lint, who “has had his trial but has not his sentence yet.”  Apparently the infraction was not too serious, because Pvt. Jacob Lint,  Company E, served out his enlistment time and was mustered out with the company Oct. 31, 1864.

But the cool contemplation gives way, when his thoughts turn to the problems Suzy is having with Albert Dial’s wife Alice and his growing disdain for Albert, who seems to be a malingerer. As my brother says,

“To make things worse, the home folks keep pestering him with their domestic squabbles, and he feels powerless to protect his wife against liars and complainers.”

Al in his big talk to fellows about it said she had a good home out there and he wanted her to go out there last fall to live.  Someone coaxed him to let her go and stay with you. I know I gave my consent for her to go but it was a darned hard pull but she has no place to go and was darned glad to get there and then to complain about her victuals when I know they were better than she was raised on. It made me so mad when I found it out but she had to live as all does awhile.  The darned deceitful bitch, I want her to leave in a hurry and I want you to keep most of this a secret.

Suzy has requested that Erasmus not let anyone see her letters.  This intrigues me. Is she writing more openly emotional letters than Erasmus (not a difficult leap) ?  One clue is Erasmus statement that “I like them good heartsome letters.”  (Whew! hot stuff!)

Again, the homesick Private Anderson is weighing the advantage of desertion as he thinks about Tom Phillips. In the report, Camp and Field, published twenty years later, Cpl. Wolbach reported that Tom Phillips was last seen in mid January when they were on the White River, was captured by the Confederates and paroled, but did not return. Instead he went west to become a hunter and trapper.

These soldiers are neighbors back home. Tom Phillips’ family lives just three farms away from the Anderson’s, according to the 1860 census. On the other side of the Phillips’ farm the Cellars, with their family of daughters, now mourning their lost son, Ephraim.

Erasmus’ admires and perhaps envies Tom’s gumption, when he writes to Suzanne.

Phillip’s folks need not be uneasy about Tom for I know the whole story but keep dark for if its found out it may cut him out of his pay and bounty money.  It was his intention to go to some rebel farm and give himself up and be paroled and just stay around in Arkansas and work for his board and hunt, for game is plenty. That was his idea anyhow. But you keep dark and if you hear from him tell me.

Although Erasmus thinks this is an honorable thing to do, and is tempted himself, he constantly weights the pros and cons.

I consider it an honor for any man to leave this business.  If I only had my pay and was up the river I think I would be like all the rest, come up missing.  Do what I will, I will not forget to provide for my dear family.

But ever practical, and not wanting to be thought a coward, he concludes..

But I will serve my time and I will keep in good heart for I can take it as well as any other man.  Jake has got the taters ready.

*Dating this letter has proven difficult. It may belong to an earlier date–perhaps mid-January when they were still coming down the Mississippi after the battle of Arkansas Post.

To see the previous letter, #8, Politics and Peaches, go here.

To see the next letter, #10, Vicksburg Campaign Starts, go here.

1 thought on “In the Dark Woods of Mississippi:Erasmus Anderson Letter #9”