…We have made our way around here at last, partly by land and partly by flat boats and yawls for the land is nearly all under water here and the rebels have cut the levee to try to stop us.  We are now about 30 miles below Vicksburg.

The 16th O.V.I., as part of Ulysses S. Grant’s plan to take Vicksburg, has continued to march south on the Louisiana side of the river. The march to Vicksburg is underway, although the troops are going south, in order to cross well below Vicksburg and attack from the South.

The “finally here” is an understatement. Our usually irascible Erasmus seems almost optimistic in this letter. Cpl. Wolbach’s account describes the long slog from Richmond Louisiana, where ‘E’ wrote his last letter to a levee just past Smith’s Plantation. Wolbach says:

“Moved on April 13 through fearful roads all day across fields. Avoiding the roads where they were the worst, picking our way around ponds and over bayous, with great loads of mud sticking to our shoes, the regiment dwindling away and becoming smaller every hour.  Sweating, weary and hungry, the advance fragment of the 16th reached the place for the night’s encampment.”

Erasmus said “…the rebels have cut the levee to stop us.” Wolbach explains that the land is flooded for about a mile between the plantation and the river because the Confederates have cut the levee. The first men to get there built rafts from boards torn from nearby buildings, and later troops are ferried across that water.

Erasmus speculates at length about the strategy of the army, although it is “hard for me to say anything of about what we are going to do”

…but from all appearances there will be something done soon.  The Rebels have or are reported to have a fort at Grand Gulf below here.  I think it is the intention to take it and go on down to Fort Hudson and there connect with Farragut’s Fleet and take Fort Hudson, then the two fleets can connect together on Vicksburg.  My opinion is there will be hot work in this quarter before long but the gun boats will do the butt end of the work; in my opinion we have a powerful fleet here and above and [both in his immediate vicinity and north of Vicksburg] put it with the fleet below [south of his present position] it will be enough to do almost anything.

This is quite a change in outlook for the usually pessimistic Erasmus who has been predicting that the Union could not win.  Perhaps the cannonading that took place a couple nights ago impressed him with the power of the Union’s Navy.  He tells Suzi:

There is eight big gun boats down here and two transports.  They run the blockade the other night.  They had a warm old time though, one transport sunk, the gun boats was not hurt.  They are soggy looking old things.  I tell you it would do you good to hear them let loose.  It makes it roar up and down the Mississippi for about a quarter of an hour like thunder. 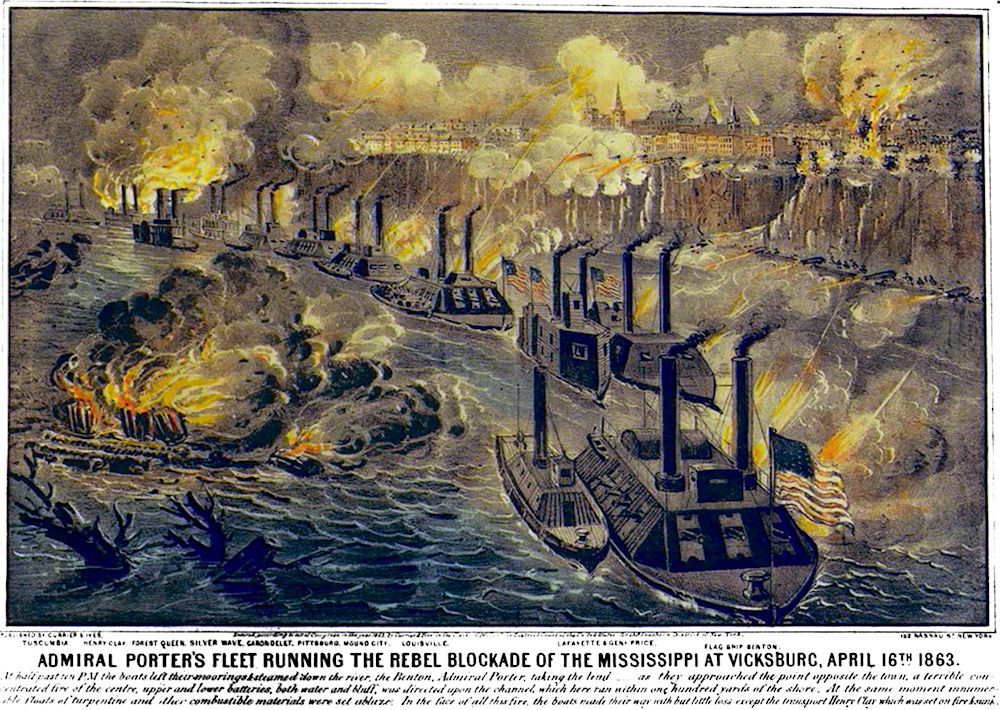 This is the battle that Erasmus and the other men heard boom from 30 miles (Wolbach says 18 miles) away in Vicksburg.  The fleet consisted of seven ironclad gunboats and one wood gunboat (General Price) as well as  three transports pulling ten barges. The ship that went down was the Henry Clay, a transport ship. Cpl Wolbach gives a detailed and dramatic description, which you can read here.

Given what they marched through to get here, and what he can see around him Erasmus is concerned about how they are going to go forward.

Now if we have to go clear to Fort Hudson, I see no other way to go but march for we have no boats and cannot get them below Vicksburg and I don’t see how we are to march it will be a long hard and hot march.  The weather is very hot here now but if I only keep good health it is all I ask.

Wolbach has mentioned that it continues to rain, and “Very little besides the levee at New Carthage was above water.  Much of the back country was one vast watery waste.”

Once again Erasmus voices the soldier’s complaint his own colorfully expressed–“Nobody tells us nothin’.”

I may be mistaken in regard to our movements for it is all guess work for we know nothing about it for a soldier is just like an ox he don’t know in the morning where his bed will be at night; he don’t know whether he will move today, tomorrow, or if he does move, where he is going; whether it will be 5 miles or 50 but it is all for the best I suppose in the rounds.

He is looking at Suzi’s letter, and starting to answer her plaintive inquiry about when he will be coming home.

I see but poor prospects of it till peace is made.  Unless something turns up that is unseen at present [musing–]not but I like to be at home but the impossibility of the thing[–] but I hope this summer will put an end to this war some way or other.  If we can succeed in taking these three places on the river I don’t see how the rebels can hold out much longer.  They will not give up until the bitter end.

Despite his change of tune, he can’t resist one political jab at the leadership.

If we had the right kind of men this war would have been over long ago.

But suddenly Erasmus is ordered to pack up.They are moving again.

This is a hasty close.

Although this letter is dated April 20, the troops moved out on April 19, so he may have had the dates wrong.  This next move takes them to a much more pleasant camp, which he will describe in his next letter.

Next letter: At the Perkins Plantation

Notes: The transcriptions of his Civil War letters  which I use with the permission of a descendant of Erasmus’ widow and her second husband, and I am deeply grateful for permission to share the letters.