The long and fascinating story of the Stout family in America starts in 1643 on the East Coast when Richard Stout of Nottinghamshire, England ended a 7-year stint with the English navy and worked briefly as a mercenary for the Dutch in New Amsterdam.

I will tell Richard’s and his wife’s stories later, but they wound up in Monmouth County, New Jersey, and the Stouts married, prospered and multiplied in New Jersey for some generations before spreading over many different states. Because there are so many Stouts, there are many books and many truths, half-truths and mysterious myths to wade through.

My maternal grandmother’s (Vera Stout Anderson)‘s paternal grandfather was Isaiah Stout. For several generations each family of Stouts had an Isaiah and an Isaac–just to make things interesting for their descendants who might want to trace family history, I tend to think, peevishly.

More realistically the names reflect a strong religious theme that started when the pioneer, Richard Stout, cast his lot with the Anabaptists who differed with my Pilgrim ancestors in that they did not believe in baptizing babies. Since I know that my Great-grandfather William C. Stout was a devout Christian, I have no reason to doubt that his father, Isaiah was as well.

I see an interesting mystery in the biography of Isaiah Stout’s son John Franklin Stout  (brother of my great grandfather William Stout) in the book Omaha, the Gate City and Douglas County Nebraska (1917) it says

“His (John Franklin’s) grandfather Isaac, a native of New Jersey, spent his entire life in that state. His father, Isaiah Stout, was born in  New Jersey 1822 and traveled on foot to Ohio when 17 years of age.”

My great-great grandfather Isaiah’s  grandfather Isaiah (1773-1810) and his son  Isaac (1800-1877), were part of the minority of Stouts who stayed in New Jersey through the 19th century. , perhaps influenced by all those uncles and cousins who were moving west, John Franklin’s father, Isaiah (1822-1872) DID resettle in southern Ohio, and it is quite possible it was when he was 17 and he walked. I know from reading about the wagon trains in that period that most travelers walked alongside the wagons rather than ride.

That would be very interesting, if true, and totally in line with the adventurous spirit of other, earlier Stout men–particularly the pioneer, Richard Stout. But, alas, I have no way of proving that Isaiah Stout (1800-1877) actually walked from New Jersey to Ohio in 1839, at the age of 17. It is also of interest because Isaiah’s next to youngest son, Thomas, left home at 17 to travel west from Ohio. This same bio says that John Franklin Stout is “a representative of an old New Jersey family of Dutch extraction.”  That is partially true. As I pointed out, Richard Stout, the pioneer, was English. However his wife Penelope came from Holland. 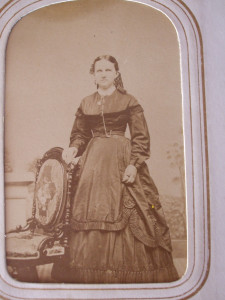 So many Stouts had scattered to the western frontier (which Ohio still was) that I suspect Isaiah was following some uncles or cousins west in 1839. Whatever his motivation for landing in Guernsey County in southern Ohio, five years after he arrived, he had won the heart of 18-year-old Emeline Cochran and the approval of her family who were pioneers in that county. They were married On June 11, 1844 (NOTE: ERROR IN THIS DATE CORRECTED 3/2020) and the following year their first son, my great-grandfather, William Cochran Stout was born.

The History of Guernsey County (published in 1882) holds another mystery.

“The couple lived for some years in Guernsey and Washington counties, and in Clay county, Indiana, lived in Oxford township for ten years and finally settled on a farm one mile west of Middlebourne in Wills township, where Mr. Stout died in 1872.”

I have heard no family tales of that move to Indiana–although I know there were other Stout families in Indiana. Nor do I have any concrete record of them living in Washington County. I do know where the Stout farm was located in Wills Township, Guernsey County, west of Middlebourne. [ADDITION March 2016]  I have discovered a land deed in which an Isaac Stout and his wife “Lidia” transfer land in Delaware County, Indiana in 1838. This cannot be the father of the Isaiah that we are focusing on here, because there are clear records of an Isaac and Lydia Stout in  Indiana. Plus, it is a different county than mentioned in  the Guernsey County book.

In the 28 years they were married, Emmeline and Isaiah had eleven children, built a house and a successful farm. (UPDATE 3/2020: Thanks to a reader, here’s an aerial view from 1975 of the Stout farm. (https://vintageaerial.com/photos/ohio/guernsey/1975/EGU/4/2)By 1989, the later owner of Isaiah Stout’s farm said they barns had been torn down.)

Three of Isaiah and Emeline’s children died before reaching the age of 5. Isaiah, apparently uneducated and content to stay in Ohio and work his farm, surely was proud of his bright sons and daughters, although he did not live to see most of them reach success in marriage and careers. I can’t help think that he might have been disappointed that his four successful sons turned their back on his Ohio farm.

Isaiah died when he was just fifty years old, before his youngest two sons left for the west and became a lawyer and a rancher, but he saw his two oldest sons become doctors.

I have no photos of Isaiah–although there are pictures of Emeline and most of the children in our family collection. Based on the photo of his sons that you can see in the article on Dr. George Stout, I have a mental picture of a sturdy man with a high forehead and upright bearing. 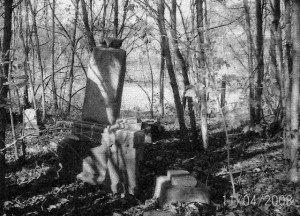 Unfortunately Isaiah never met any of his 24 grandchildren before he was buried in the Stout cemetery in Guernsey County.