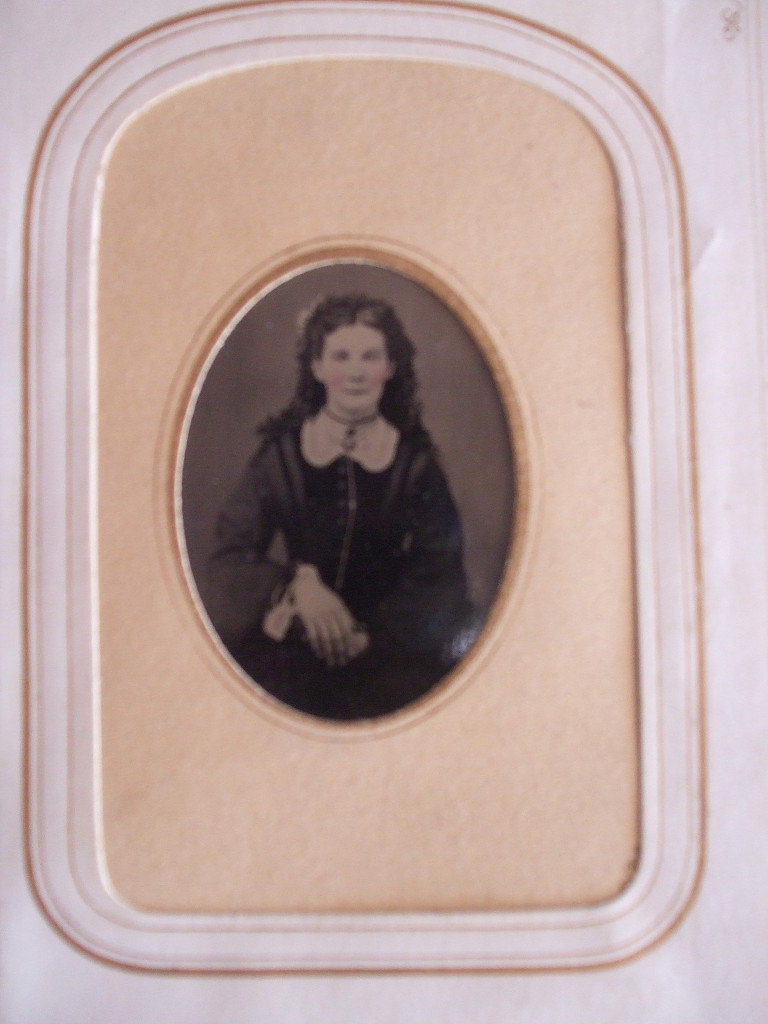 This very pretty young lady who either had naturally curly hair or spent some time crimping it. She was very thin–particularly if you compare her to the other Stout women–who lived up to their name.  The photographer saw fit to add some bright red spots on her cheeks, which ironically in hindsight seem to reflect her illness. This is a tintype, and so not extremely clear (see more about different types of photographs in this article I wrote about dating photos.)

Mary was the second oldest in the family, coming along in 1847, two years after my great-grandfather William Cochran Stout, when her mother Emeline was twenty-five years old. Like her seven brothers and sisters, she grew up on a farm in Guernsey County (moving only with the family from Oxford Township to Wills Township when her father changed farms) but unlike her siblings, she never left home and never married.

Although I say she never left home, it seems that she might have received a bit of education beyond high school, because in 1880 the census report lists her (at 33) as a teacher. Ten years before that, when she was 23, she was not teaching–she was “at home.”  I speculate that this could mean she was a music teacher or sewing teacher–something that would not entail going out to a public place, and might not require extra education.  Don’t those long thin fingers look like a pianist?

Whatever it meant by “teaching,” the 1880 census also reports that at the time of the census she has been unable to work because of “lung disease.”

Was Mary a “consumptive?”  Did she suffer from what we now call tuberculosis?  And did her illness perhaps inspire her brothers Will and George to enter medical practice? All is speculation.

At the point in time when the census taker called upon the family in the summer of 1880, Mary’s father Isaiah Stout had died, William had left home, George was studying medicine, Martha was married and Thomas off to make his fortune in the West. Elizabeth (Lib) and Sarah were still at home, but soon to be married. Frank was still tending the farm, but about to take off to study law and move west.

All I know for sure is that frail, pretty Mary died in 1881 when she was 34 years old, apparently carried off by her lung disease. Their mother, Emeline, must have felt the blow severely. While she had lost other children, this was the first adult child to die before their mother.

Mary Stout, my great-grand aunt is buried in the Stout family cemetery in Guernsey County.

2 thoughts on “Brief Life of a Delicate Beauty: Mary Stout”