We left the 16th O.V.I. and Pvt. Erasmus Anderson spending the night at Edward’s Station, 151 years ago today They had engaged the Confederates at the battle of Champion Hill, after days of marching and skirmishing. They were tired. Rations meant for three days stretched for almost a week. The clouds of smoke and sounds of gunfire were constant. They were at last engaged in the Vicksburg siege.

Now, on May 17th, Grant’s Army continued to pursue the retreating “Rebs.” 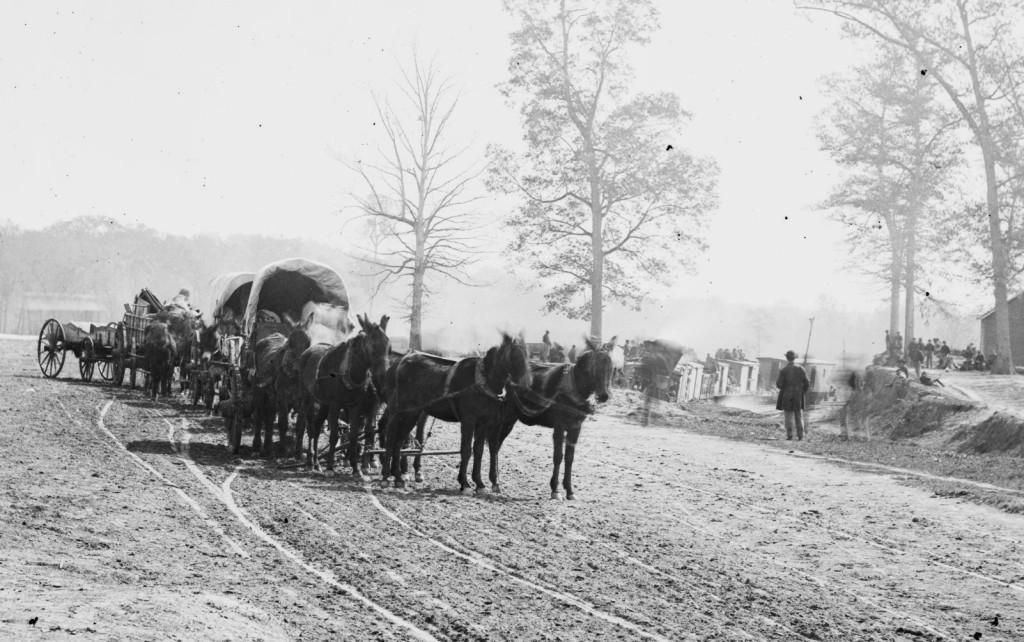 A Civil War scene with mule train on left and down the hill, a railroad train loaded with soldiers. At the Big Black River. Photo from mkwe.com

Not far down the road from Edward’s station, they came to a bridge across the Big Black River.  The Confederate troops had burned the bridge behind them, and fought ferociously trying to slow the progress of the Union troops.

Wolbach reports in “Camp and Field” that many members of the 16th regiment were killed and wounded; however, the South had lost this battle–some soldiers fleeing and 1800 surrendering.  That made the Battle of Big Black River Bridge decisive in the Vicksburg siege because the South lost so many men and Grant’s army now surrounded Vicksburg. And once more, Erasmus had survived.

A few days later, Wolback mentions the sad state of the 16th. “The 16th, badly reduced in numbers by the Chickasaw disaster and subsequent sickness, entered the campaign in slender force.”

The Union army now marched to within three miles of Vicksburg and prepared for the first assault on the southern city. Since the 16th was southeast of Vicksburg, along with the rest of McClernand’s forces, and Sherman and McPherson covered the north, northeast and approaches to the river on the northwest, and the Union gunboats blocked all traffic on the Missisippi,  the Confederate army had no escape route. Grant thought the rebel troops would give up. He was wrong. 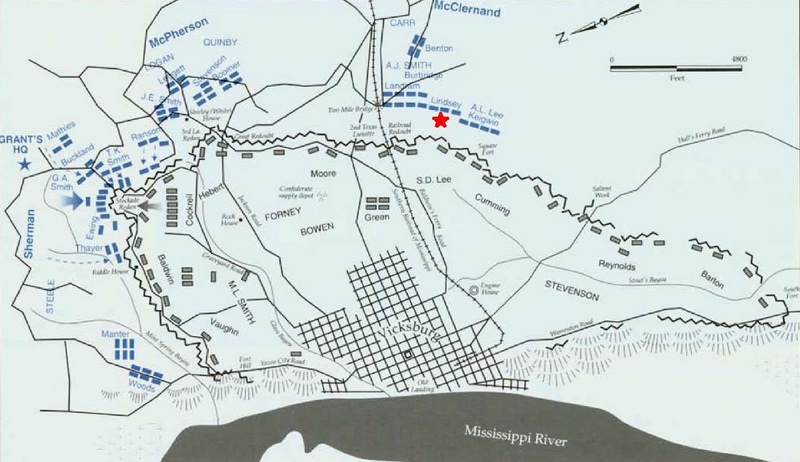 Vicksburg Battle Map. The red star indicates the location of the 16th OVI. Map from mkwe.com, originally the National Park Service. Note that North is at the bottom and south at the top in the orientation of this map. The 16th was coming from the south.

Wolback describes the approach to Vicksburg by the 16th OVI and says that after they had marched two miles from the previous nights camp, they saw in the distance the yellow earthworks that had been thrown up around the city.

Puffs of smoke indicated where the artillery was and as they approached the constant firing became extremely noisy. The Union forces piled down into ravines and up the other side to face the Confederate cannons. The two sides fired at each other from mid day until it became to dark to see. At night, dodging random shots, Grant’s army gathered their wounded and dead from the field and dug trenches to shield their cannons.  The Union had lost 1000 men in the first Vicksburg siege, and Erasmus no doubt lost many friends, but his luck held. 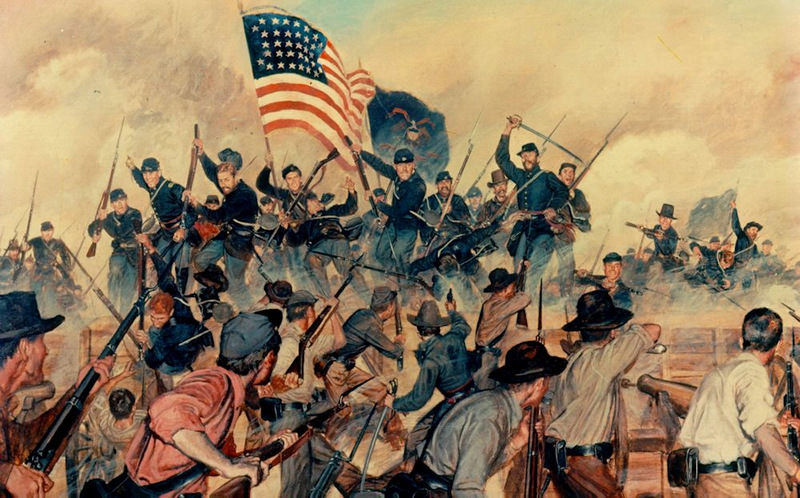 Vicksburg First Siege. This is an idealized painting by H. Charles McBarron, Jr., showing the First Battalion, 13th U.S. Infantry, fighting its way up a steep slope to engage Confederate lines at Vicksburg, Mississippi. From mkwe.com

Field hospitals were established around a large white house that Company E (Erasmus’ company) had marched by.

The men had been marching without enough rations and with no stop to really rest. Grant had decided the South was not going to surrender easily, and he needed a full-fledged attack. For that he needed rested, well-fed troops. So as they made camp, supplies arrived–food, shoes, clothing, soap–by the wagonload, enough for 20,000 men.

Southern deserters reported that the citizens of Vicksburg were “burrowing in caves dug in the hillsides to escape the damages of bombardment.” Despite the fact they they were “resting” until the appointed hour of the second Vicksburg sidege on May 22, the sharpshooters found opportunities to pick up opposing soldiers hidden in the woods. On both sides, these farm boys who had been shooting squirrels and rabbits since they were twelve, had deadly aim.

Erasmus Anderson must have wakened feeling renewed on the beautiful morning of May 22. Enough to eat–including the much desired coffee and real bread instead of hardtack–a good wash and fresh clothing.  But it was to be a gruesome day.

“O how solemn is the subject

On which I now wish to write,

‘Tis the fatal charge on Vicksburg,

As this sacred spot I tread,

Here among the mighty dead.

Sons and fathers in the tomb;

Far from loved ones they lied buried,

‘Neath this deep and silent gloom.”

Poem included in Camp and Field by Theodore Wolbach

At ten a.m. the artillery boomed …and boomed and boomed. There was no answering fire, as the south saves their ammunition.  Then the firing stopped. Deathly silence for a moment before 20,000 men surge forward. As Wolbach reports, “Instantly the works in front are fringed with butternut and gray and blazing with a musket fire that has never been surpassed in the annals of war.”

The second Vicksburg siege has begun.

This account is an extension of the set of twelve surviving letters sent to his wife by my great-grand uncle Erasmus Anderson. I am extremely grateful to the owner of those letters for permitting me to use them. The last letter we have was written April 27,1863 but Erasmus went on with the Union Army into the Vicksburg siege.
As I follow the actions of E Company, 16th Ohio Volunteer Infantry, I depend heavily on the reporting at the website of Michael K. Woods. Quotations from Theodore Wolbach’s Camp and Field, which appeared in a Holmes County newspaper in the 1880s, come from Wood’s website, as do the pictures and maps used here.