Although I would not usually relate the story of as distant a relative as a remote cousin, but Israel Stone and his two wives are just too interesting to ignore. According to Ancestry.com he is my 7th cousin 3x removed.  But he is also my 1st cousin 8x removed, if that’s better.]

Israel was born on April 15, 1749 in Rutland, Massachusetts. His parents were cousins. Deacon John Stone was the son of Nathaniel Stone  and Elizabeth Stone (Stone) who  was the daughter of Capt. Samuel Stone and sister to Nathan Stone, my 5th great grandfather. 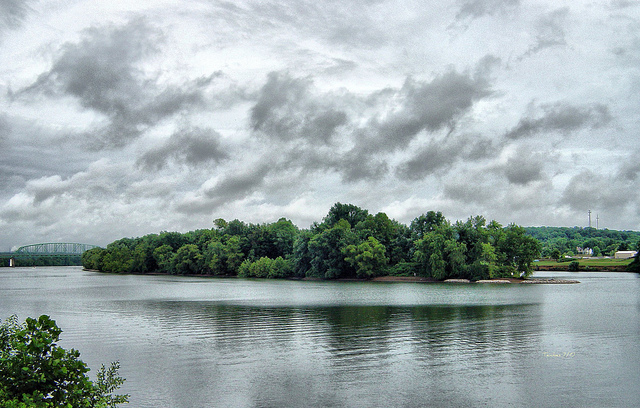 Modern view of Buckley Island in the Ohio River near Marietta, Ohio. The settlers were forced to try to pasture animals on islands to keep them safe from Indians. But then wolves got them.

The couple married in 1767 in Rutland, MA and had ten children in Massachusetts. They are an interesting bunch, especially Sardine Stone, who became an Ohio Senator. One of the younger brothers, Benjamin Franklin Stone (1782-1873) became a teacher. In his eighties (finishing at 91) he wrote an autobiography, which gives wonderful details of life in early Ohio territory.

Israel was a militiaman, and when he had been married only 8 years, The record shows:

Israel’s son, Benjamin Franklin Stone, who was ten when they moved to Ohio, remembered from the Massachusetts days when his father would drive a wagon to Boston (presumably with farm produce.) They lived on the “old Stone farm” until 1786 when he sold that farm and moved to another one. After the Revolution, currency became so devalued that he was having a hard time getting by. This spurred his move to Ohio with the Ohio Company.

Israel was one of the men of Rutland who followed General Rufus Putnam to Marietta, Ohio. In 1789, according to Benjamin Franklin Stone (whom I will call B. F.), Israel set off for Ohio with another man to survey the prospects. His son Jasper (1774-1830) followed a year later. Two daughters stayed with their mother in Rutland, but all the other children were scattered to live with other families in Massachusetts.

In September 1790 a group of 26 people, including Lydia and most of her children — Sardine, Matilda, daughter Lydia, son Israel, Augustus, Christopher Columbus, Polly Buckley and Benjamin Franklin — set out in a train of 3 ox carts with General Putnam’s family. I cannot believe that Lydia was happy to have to make this journey with her huge family.

B.F. says that his brother Israel kept a detailed journal of the trip, but it was unfortunately lost.

Mother Lydia took a cow and Putnams had three cattle.  They traveled through Massachusetts into New York and across Pennsylvania. When they reached the Ohio River, they took a barge to Marietta. The journey took a total of 8 weeks. When they arrived, they were met by their father Israel, whom they had not seen for a year and a half, brother Jasper and sister Betsy who had traveled ahead with another family.

A tragedy of sorts befell them along the way when 100 pairs of socks were lost.  Knowing they would not have sheep for a while, hard-working Lydia and her daughter had knitted the socks to supply the company for a year or two. They were left with only two pair of socks each.

LATE BREAKING: A contributor to the Ohio History & Genealogy Board on Facebook, brought to my attention a site focused on Marietta History.  A search for the Stone name brings up an article called “First Settlement of Rainbow” in the September 7, 1876 issue of the Marietta Register with additional information about Israel’s family. 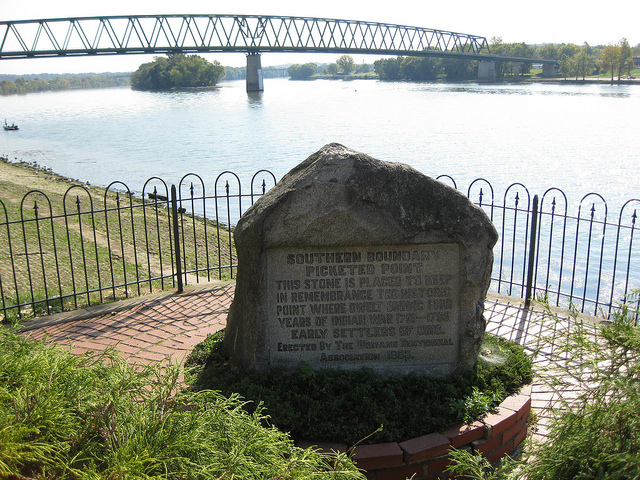 Picketed Point, reminder of the Indian Wars along the Ohio River 1791-1796 Photo by Photo by Richie Diesterheft, Flickr.

The Indian raids made going into the fields or woods dangerous. There was a massacre of several of their group in 1790, and they were disheartened by the defeat of General St. Clair in November 1791 in a battle with 1000 Ohio Miami, Shawnees and Lenape with Potawatamis from Michigan. The Indian forces were known as the American Indian Confederacy. Only 48 of about 1000 American troops escaped death.

I will return to talk about the Ohio Indian wars later, but the underlying problem was that the treaty ending the American Revolution with Britain treated the American Indians as part of the defeated, and although they were not part of the treaty talks, their lands were given to the American government. Understandably, they disagreed.

But life went on among the settlers and on February 27, 1792, little Harriet Hubbard Stone was born, Israel and Lydia’s eleventh child. Lydia died when her baby was only eight months old.  B.F. says that his mother had told him “her constitution was much impaired by excessive hard work even before she was married.”

In March of 1794 Israel was granted a patent of 100 acres of land out of the 1000 that the government had given to Putnam and his company. After living in blockhouses within a fort at Marietta, Israel Stone and a few others moved in 1795 upriver to build another garrison which was known as Farmer’s Castle in the settlement of Rainbow.

Meanwhile, in England, Mary Broadbent, who was born in Cheshire England in 1764, had married William Corner in 1783.  In 1795 William and Mary Corner and their children — William, George, Sarah and Mary — sailed to America and joined a group that started the Westward trek.  However, unlucky William died of a fever in the mountains of Pennsylvania  and was buried there.

Mary, who must have been an intrepid soul, buried William in Pennsylvania and continued west with the children.  Wherever she had intended to go, she stopped in Marietta. Although the Ohio Company was offering free land to settlers, as a woman whose oldest child was still under twelve, she did not qualify.  But she met Israel Stone and they married in August 1796.

So Israel Stone added three step-children to his family, and he and Mary had one more.

Israel, who is sometimes referred to as Capt. Stone, died July 3, 1808 and is buried in Rainbow. How poetic to pass away in Rainbow! And how peaceful it sounds compared to the life of Israel Stone with his wives Lydia and Mary.

How they are related to me

7 thoughts on “Surviving on the Frontier: Israel Stone”