Women fought for liberty from the familiar territory of their kitchens. The British empire was overextended and the American housewife’s boycott of goods deprived them of taxes. The goodwifes punched the enemy right where it hurt the most. In the pocketbook.

During the American Revolution, the women contributed their frugality and ingenuity in the kitchen, in addition to their moral support. We will see on Thursday’s profile of Elizabeth Hubbard how difficult it could be for a woman with three sons and many relatives and townspeople in the army. 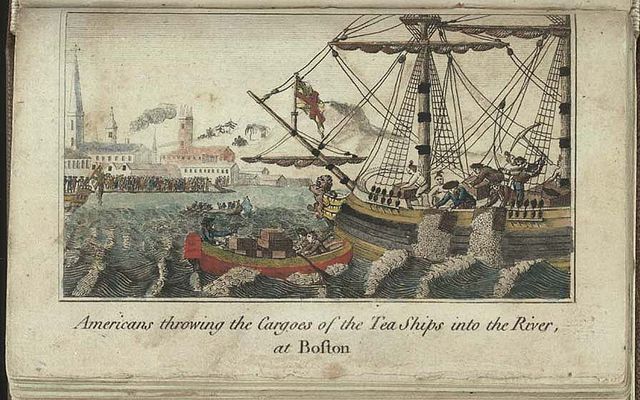 Tea became a battle ground. Although it had not always been the drink of choice as this passage from an article in the Daughters of the American Revolution Magazine points out. Not familiar with Bohea (Boo-hee)? It is a smoky black tea from China, and according to this website was the majority tea destroyed at the Boston Tea Party.

In A Thousand Years Over a Hot Stove: A History of American Women Told through Food, Recipes, and Remembrances

Laura Schenone points out how critical women’s help was in defeating the British.

In addition to going without countless necessities, women ran farms and businesses while their husbands were fighting.  They followed battalions of soldiers, ministering to and feeding the sick and wounded. They were competent, strong, and highly involved.

Specifically, they gave up staples they were used to, as Abigail Adams wrote to her husband John,

“If I have neither Sugar, molasses, coffee nor Tea I have no right to complain.  I can live without any of them and if what I enjoy I can share with my partner and with Liberty, I can sing o be joyfull and sit down content.” 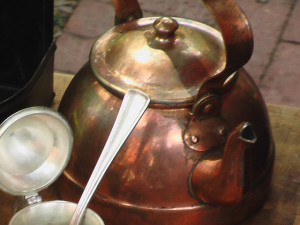 The website, The Food Timeline, quotes a book about tea:

“The young ladies of Boston signed a pledge, ‘We the daughters of those patriots who have, and do now appear for the public interest, and in that principally regard their posterity, as do with pleasure engage with them in denying ourselves the drinking of foreign tea, in hope to frustrate a plan that tends to deprive a whole community of all that is valuable to life.’ They were joined by others around the country, drinking instead ‘Balsamic hyperion’ made from dried raspberry leaves, or infusions of other herbs. The Boston Tea Party did not destroy the American taste for tea, although few retailers in Boston dared to offer it for sale for a number of years. George and Martha Washington continued to serve the best quality tea” 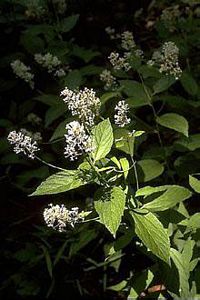 You can see many quotes from Revolutionary times and more information about this plant and its use for tea, used widely as a tea substitute, at this web site.

Since I am a fan of green tea, I really should see if I could grow some of this plant. One newspaper even claims that “(it) is preferred by many to the best Green Tea.” 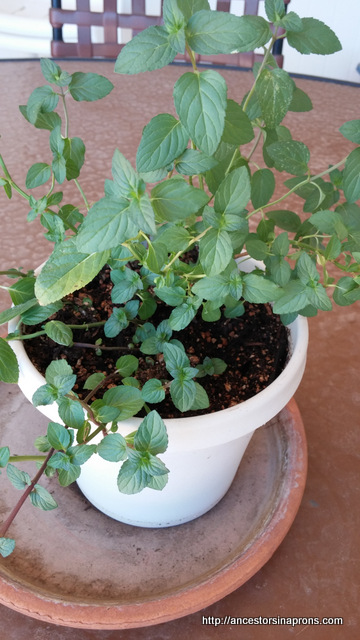 Chocolate Mint for a cup of tea

Bergamot, a garden herb, which is the flavoring used in Earl Gray Tea.

Raspberry Bush leaves (I think I would also dry some of the fruit and mix it in with the leaves when I make the tea.)

Rhubarb Leaves (I can’t vouch for this one, but have to admit it does not sound attractive.)

Mint, which could be found in many varieties in a housewife’s herb garden. When I was growing up, we always had mint growing beside the house wall and would always add it to a glass of iced tea. Beware if you plant it in your garden. It spreads by runners, like that peeking over the edge of this plant and will take over EVERYTHING.

Sage, still used as a tea. In fact, I was offered some in Greece by a woman who let me know despite our lack of common language that it would cure colds and women’s ailments.

For any of these herbs and plants, hang the stems with leaves upside down to dry for a couple of days.  When dry, store in glass jars. To make tea, lightly crush the leaves and place in a strainer or tea ball, pour over them boiling water.

And enjoy your liberty.