Just when American women were hoping to get back to normal in their kitchens after the American Revolution–even able to drink real tea again– many of them packed all their belongings on wagons and oxcarts and set off to settle new lands. Areas that had before been contested or firmly controlled by the English King’s rule were now wide open for American settlement.

We followed Elizabeth Hubbard How Barrett‘s journey from Paxton MA to New York state  with her son, and the journey a year later of  Israel Stone and his wife, Lydia Barrett from Rutland MA to Marietta and then Rainbow, OH. (Elizabeth was Lydia’s mother. I wonder if they compared notes?) Not only was the ride rough and uncomfortable, and sometimes definitely dangerous, but somebody had to pack enough supplies and figure out how to feed a family on those journeys. 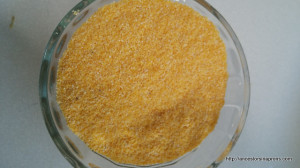 Benjamin Franklin Stone, son of Israel and Lydia, lists in his journal some of the foods they ate in the wilderness, including Indian Bread.

I have seen Indian Bread referred to in other books about 16th-18th century America, and was never sure exactly what it was.

Living in the southwest, Indian bread generally means “fry bread”–the flat disk of flour and water and baking powder that is deep fried and served with honey or beans.  But I suspected that was not the Indian bread of the east coast that was introduced to the first settlers there.  I most like the explanation from A Thousand Years Over a Hot Stove, where author Laura Schenone imagines the interchange.

I envision a wary meeting of an Indian woman dressed in deerskins and an English housewife wearing her heavy linen skirts and long sleeves…The Indian woman uses hand gestures to demonstrate the making of a bread called pone.  She takes dried corn powder, enlivens it with water, molds it into cakes and then boils and bakes it on the hot stones of a fire.

As Schinone says, history has given us a version where the male Indian Squanto imparted wisdom about food to the Pilgrims. But she says women were there, too.

How else did they learn the preparations and the words for Indian dishes such as hominy, no-cake, pone, sucotash, suppawn, and samp?  All this from Squanto?  I think not. 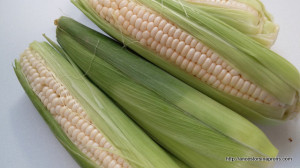 All of the dishes mentioned here are made from cornmeal, which I have discussed before here. Cornmeal was a new concept–as was corn–to the Puritan women, so they set about adapting Indian recipes and using corn meal to substitute for familiar oats, barley, rye and wheat flour until they were able to grow their own grain. And of course, by that time, they had become rather attached to all those concoctions made with corn, so it became an important part of the American diet. 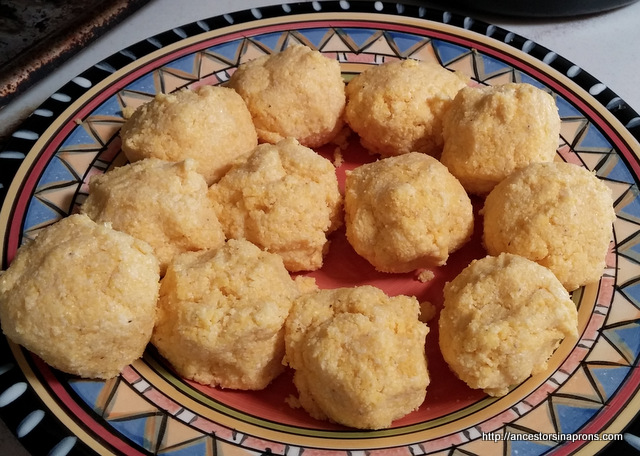 So–Indian bread, I believe, is what we now call corn pone, because “Indian meal” was corn meal.  There are myriad versions, but this one would be the easiest to make with ingredients Elizabeth could pack on that oxcart. And as a bonus it is gluten free!! 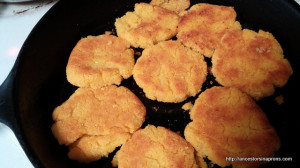 If you do not have sour milk or buttermilk handy, you can put 1/2 tablespoon of vinegar in 1/2 cup of milk to sour it. You can also substitute sour cream or plain yogurt.

I needed an iron skillet plus a pie pan to accommodate 12 small cakes. You could pat them thinner if you like, and if you have enough pans.
I turned them over after the 30 minutes and let them brown on the 2nd side.

They would cook just fine on a hot rock by the campfire.

They make a crunchy bread for dinner, and you can eat the leftovers for breakfast, crumbled in a bowl with milk. Not gourmet fare, but definitely filling after a day of riding in a covered wagon. 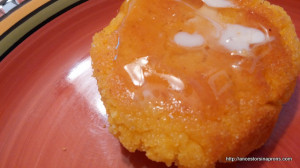 “From Rutland to Marietta: Leaves from the Autobiography of Benjamin Franklin Stone”, New England Magazine, New Series Vol 16 (1897) p. 210 ff. Both the entire book (1873) and magazine available for search at Google Books.