We do not drink hard cider so much in the United States these days. Mores the pity.  It is delicious stuff–and it provides a direct tie to the kitchens and taverns of our ancestors. 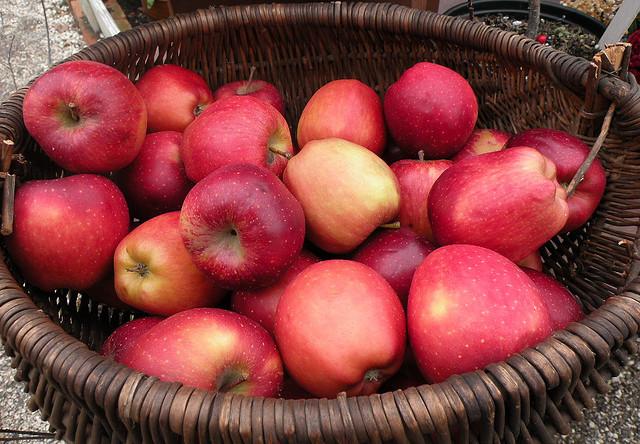 When I was a child in Ohio, we looked forward to the fall harvest of apples and the fresh cider that was available.  Parents had to sample the stuff poured out of the farmer’s glass jugs before passing it on to the children, because you can’t tell by looking whether it is that innocent Hallowe’en brew of harmless apple cider, or whether it has been allowed to ferment into a true liquor.

I had not had “real”  cider for many years until we traveled to Normandy, France three years ago. There apple cider — the hard kind–is the most popular drink.  In fact, don’t worry whether you’re getting soft or hard cider when you order–you’re definitely getting the hard stuff.

I don’t recall my father ever trying his hand at making cider–although he liked to experiment with making all kinds of things–I remember the cottage cheese experiment, for example.  So I was delighted to find an explanation of exactly how our ancestors made that popular drink, and learn a new word–“scrump.”

Settlers in the new world had that kind of optimism that leads people to plant seeds and wait for them to grow into trees.  In Ohio, it is said, every cabin had apple trees growing by the front door (many attributed to Johnny Appleseed). And of course many farmers had whole orchards of apple trees by the 19th century.

Since the Howe family tavern keepers were also farmers, it stands to reason that they would grow apples and use them to make the most popular drink in the new world–cider– derived from a less appetizing sounding drink called “scrumpy.” 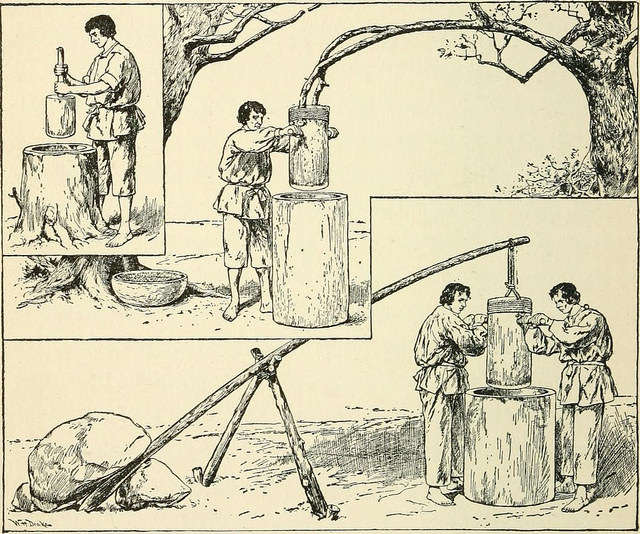 Cider pressing. From the book, Our First Century (1905) by George Cary Eggleston, p. 226. Found on Flickr.com

The following excerpt is from the webpage of Blanchard’s a Colonial era inn in Avon, Massachusetts that no longer serves meals. You can arrange for private visits to the Inn and the home/museum next door at their website.

SCRUMPY
By Dr. Richard Weiss
The two most popular drinks in the colonial period were beer and hard cider, both made from recipes brought from England. Cider made from scrumps (windfall apples) was brewed in the west country of England and had the reputation of being a ‘man’s’ drink.

…Such techniques as dropping a bag of pig’s blood in the neck of the bottle to catch the yeast would give it a kick. Scrumpy is still available in the west of England but pig’s blood has been replaced with fatty bacon or rabbit skin and is slowly fermented in oak casks. [Ed. note: Thank goodness!]

Following the Norman conquest in 1066, cider was an output of the monasteries and by the time of the 17th century every household had its own orchard and cider press.

…Cider apples are chosen for their higher tannin content and go under such names as Bloody Turk, Sheep’s nose, Strawberry Norman, and Slack The Girdle. Apples were knocked down from the trees with long poles but now they employ tractors and blowing machines.

To separate the juice, the mashed pulp was formerly dropped onto horsehair or cheesecloth… The dry pulp is employed as cattle feed.

The author of this piece says that cider is experiencing a bit of a comeback, and this American Hard Cider website lists boutique cider makers in America.  And come to think of it, weren’t all our apple-growing ancestors really “craft brewers” before they knew it was chic?

In case you would like to cook with your cider instead of drinking it, here is a modern recipe. Like so many of my excursions in the kitchen, this made me think of ancestors. In this case because it uses two foods they were familiar with–salmon and cider). 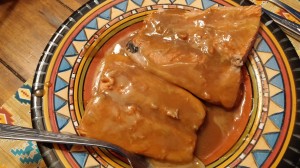 Wizenberg advocates sharing of recipes, so feel free.  She suggests with this recipe if you are cooking for two, reduce the amount of salmon, but use the same amount of sauce. That is what I did and it worked fine.  The sauce is heavenly.