In 1692, Elizabeth Howe Keyes, grand daughter of the pioneering John Howe, and daughter of his son John Jr., decided to leave her home in Marlborough and visit her sister Sarah Howe Joslin, who lived in Lancaster, Massachusetts with her husband and children.

As the sisters visited, Sarah’s four children playing around the cabin, the family story says that Elizabeth was singing. Sarah’s husband would have been working in the fields. The women were interrupted, apparently without warning, by a war party of Indians.  Imagine the chaos and terror as the warriors killed Sarah and three of her children on the spot. Then they disappeared back into the woods, taking one of the children and Elizabeth Howe Keyes with them.

The child was killed soon after, but as the story goes, the Indians were charmed by Elizabeth’s singing, and they kept her with them as they fled to Canada.  She was held captive for three years, but finally released.  Her husband had become a recluse when Elizabeth was captured, and swore never to marry.  When she returned to him, the family moved to a new town, but he said that she never fully recovered from the trauma. So she was a different kind of victim of the Indian Wars.

The struggles between early settlers in the United States and the indigenous people is difficult to discuss calmly, even today. An estimate in 1894 by the census bureau estimated that 19,000 “white” people died and 30,000 Indians in the various Indian Wars.  Of course even before the most deadly battles, Indians had died in another war–attacked by viruses they were unable to fight off. Some think at least 80% died of smallpox caught from the newcomers to the continent.  So they were greatly reduced in numbers by the time the European population increase incited conflict over land.

I have great sympathy with the indigenous people. However, I also sympathize with the Puritan settlers. To understand historic events, it is essential to look at events of the past through the lens of their own time–not imposing our own different points of view. Our culture and mores are as different from the Puritans of New England as the Puritans were from the people they called savages. And I dare say that people of Native American heritage today are also far removed from the worldview of their ancestors, even though they may be working to keep their culture and religion alive. 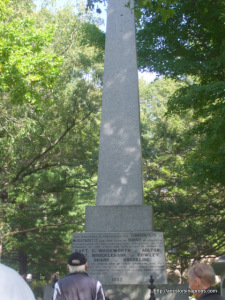 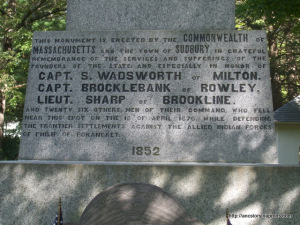 Glance through diaries and histories written in the 18th and 19th centuries, and you get a one-sided view–all anti-Indian. Look at the lives of the settlers and you may begin to realize why they held the views they did.

When you visit the graveyards of Puritan New England you will see many people who died at the hands of Indians. Some of those were militia members who set out to chase the native tribes from the lands wanted by the settlers.  But many were women and children, like Sarah Howe Joslin and her children, victims of terror raids staged by hostile bands who believed they could frighten the interlopers into returning to Europe.

The Howe family suffered an extraordinary number of losses, both in lives and property, in battles and in surprise raids on families.

The following is not an exhaustive list of Howe family members affected, and other ancestors in other lines also died or lost property.

In addition to the 1692 death of Sarah Howe Joslin and capture of Elizabeth:

April 20, 1676 saw the most vicious fight of the King Phillip War–an attack on Sudbury by 1000 Indian fighters and a day-long battle leaving hundreds dead and houses and barns burned to the ground.

Nehemiah Howe, a son of Samuel Howe, was captured by Indians in 1747 and held in Canada, where he wrote a journal before he died in captivity in Canada*–never returning home.

[UPDATE May 2018] Nehemiah’s son Caleb How married a widow, Jemima Phips.  In a 1755 raid by Indians, Jemima How was captured and in June of that year scalped and killed.

Israel Howe, a member of the militia, killed in a raid on the town of Rutland at thirty-six years old in 1748. Israel Howe was my 5th great-grandfather and the son of Samuel Howe.

Other relatives in Rutland, MA, some other Howes, some Stones, some Hubbards, were also in harms way during the Indian Wars and a memorial in the old Cemetery in Rutland commemorates them. 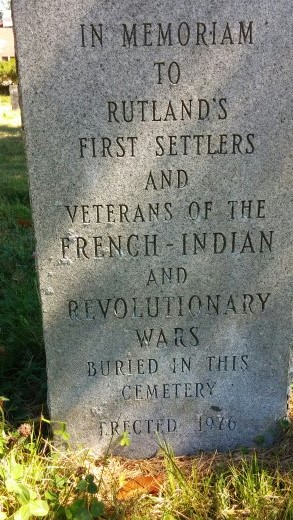 Memorial to first settlers and veterans of the French-Indian and Revolutionary Wars, Rutland MA Old Cemetery.

As Ancient Is This Hostelry: The Story of the Wayside Inn, by Curtis F. Garfield and Alison R. Ridley(1988)
A History of Longfellow’s Wayside Inn by Brian E. Plumb (2011)
Howe Genealogies by Daniel Wait Howe (1929), Massachusetts Historical and Genealogical Society. This is said to be the best of the several genealogies of the family. Although I do not have a copy of the entire book, portions of it are available on the Internet.
Middlesex County records found on Ancestry.com. Birth, death and marriage.
Historic Homes and Institutions and Genealogical and Personal Memoirs of Worcester County Massachusetts Vol. 1, ed by Ellery Bicknell Crane (1907) Available as a Google Books e-book.

*A Narrative of the Captivity of Nehemiah How. Republished in 1904 and available on Archive.or

FindaGrave.com and personal visits to cemeteries of Sudbury and Rutland.