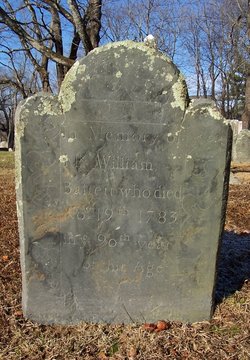 Unlike the next William’s short life, William L. Bassett lived ninety years. He took three wives along the way, making me speculate that the “L” stands for “lusty.” If the dates are correct, he had an interesting third marriage, indeed.

On March 18, 1718, when they were 24, William Bassett of Norton married his first wife, Mary Crosman of Taunton. Mary’s next 19 years was full of woe.

Their first son Gideon, born in October 1719, lived to adulthood, as did William, Jr. (as you will see below). But three other children died in infancy or childhood–Sarah at birth in 1721. Ruth died at ten years old in 1733, and Solomon died at five years of age in 1735. Their may have been other stillborn children, as there is a 3-year gap between Ruth and William, and a 4-year gap between William and Solomon.

Mary died in July, 1737 and William married Thankful Briggs  the next month.  Clearly, he was a man who needed to have a woman around, and preferably a younger one. He was 43 and Thankful was 21.  Without pausing to mourn Mary, William fathered two more children: Jotham in 1738 and Abigail in 1741. Both lived to adulthood, but not much more.  Joatham died at 23 and Abigail was 37 when she passed away.

After ten years of marriage, Thankful died in 1747.  Once again, William did not let any grass grow under his feet. He had a six-year-old and nine-year-old that needed tending to. That summer he married Penelope Brintal.  According to “Norton Vital Records”, Penelope was born July 28, 1732, which means that she was 15 and he was 53 when they married. What did Gideon (28) and William Jr. (21) think of their father’s marriage? All I know is that William Jr. married the following year. In a hurry to get out of the house?

I have not found a record to tell me how long Penelope lived, and have seen no record of any more children. However, Lusty William lived to the ripe old age of 90.

As we have seen above, of William Bassett Jr.’s siblings, 3 of 5 “dyed” according to Massachusetts Town Records at birth or in childhood. He later had two half-siblings by his father’s 2nd marriage.

WHEW! Thank goodness William Bassett Jr., born June 5, 1726, lived to marry Lydia Fisher and become my 5th Great-Grandfather, or else where would I be?

Lydia and William Jr. married in 1748 and had eleven children in the twenty-nine years before his death.  Lydia and William, Jr. were much more fortunate than William’s parents. I believe that one of these children, Mary (b. 1761), died as an infant, but ten survived to marry.

Fourth in their brood was Samuel Bassett, the Revolutionary War Fifer whom I wrote about previously.  During the war, mother Lydia must have been fretting because the men folk, including teen-aged Massa, signed up to fight. Jedidiah, Samuel, Isaac and Massa all served in the Continental Army.I am mystified as to why this generation’s William–(born 1749) did not fight.  I cannot find any information about his wife, Anne Lane, or whether they had children.  A couple of sources say he died in 1838, but otherwise, he is a mystery.

Tragically, Massa died at seventeen years old at the Battle of White Plains, New York, according to a descendent’s records on Ancestry.com. And Lydia’s husband, William, died two months later without seeing what his brave family had helped accomplish.

An interesting note from a Bassett family history*, suggests that the father, William Jr., also served in the war, but apparently he did not die in battle.  He died soon after the war began, however, in 1776,  at age 50 in Norton, Massachusetts, where he had spent his life. In fact, his father outlived him by many years.

“1776, Dec. 13. G S R: William Bassett Jun’r dies at fifty, before his father, at Norton. He died intestate in these early days of the war. A stone three feet high marks his grave in the Centre Cemetery at Norton, in the same lot as his father, third lot from the entrance.”

“The Revolutionary War was raging. That William had had a short service in this war is vouched for by the careful historian John McIlvene.”