Many people seem to think that the purpose of genealogy is to find out how your family is related to royalty. I have not extended my family history to Europe in search of titled ancestors, but among that bevy of misbehaving children sired by our pilgrim ancestor, William Bassett, Sarah, born in 1630, made the choice of mate that ties us firmly to American “royalty.” (Although my early American ancestors–not a Tory in the bunch–would have been horrified by the term.)

Our family has always been proud of being descendants of the Pilgrim William Bassett, even though his ship the Fortune didn’t get here with the Mayflower as scheduled. But my mother, who loved family history, never learned that one of the Bassett girls married so well. She would have loved this story.

Whose names do we hear in 6th grade when we are studying the Pilgrims?  Well there is William Bradford, Governor of the colony, the other main leader Edward Winslow, and surely Miles Standish, the military leader. William Brewster was the religious leader, and you have probably heard of him. And there is the 3-way romance of Priscilla Alden, John and Miles Standish, made famous (or embroidered) by Longfellow. 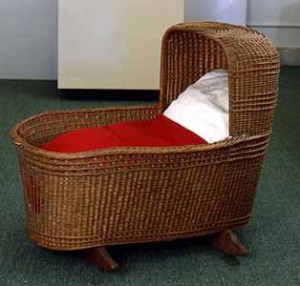 But the name that struck an emotional chord with me as a child was Peregrine White.  Besides the fact that I wondered why his parents would give him such a silly name, I was fascinated that he was born ON the Mayflower–the first child born in the Pilgrim colony.

As to the name, what do I know? I have since read that Peregrine comes from a Latin word that means pilgrim (or traveler).

Peregrine had an older brother, Resolve, who had traveled with their parents on the Mayflower. (Read more about his mother Susannah, sturdy pioneer, in the following short bio.)   Baby Peregrine waited until the ship had safely docked in Cape Cod harbor to make his appearance, becoming the first child born in the Plymouth Colony.

Unfortunately, Peregrine’s father William White, a signer of the Mayflower compact, was one of the casualties of the first dreadful winter in New England. He died in February 1621, and Susannah quickly married Edward Winslow, who was one of the close-knit community who came from Holland.

Peregrine would have been a toddler when the colony celebrated the first Thanksgiving.  Speculation is that it took place some time in October. Edward Winslow, Peregrine’s step-father, by the way, is not only important as a leader, but also because he left one of only two surviving documents that mention that first Thanksgiving.

Some time in his early twenties, young Peregrine caught the eye of Sarah Bassett, who was ten years younger than he was.  His obituary says, “He was vigorous and of a comly (sic) Aspect to the last.”  He must have been an attractive youth. According to church records, although they married–perhaps when she was as young as sixteen–they had been fooling around beforehand. The church charged them with “fornication before marriage.” It seems you just could not get away with anything in Plymouth Colony. 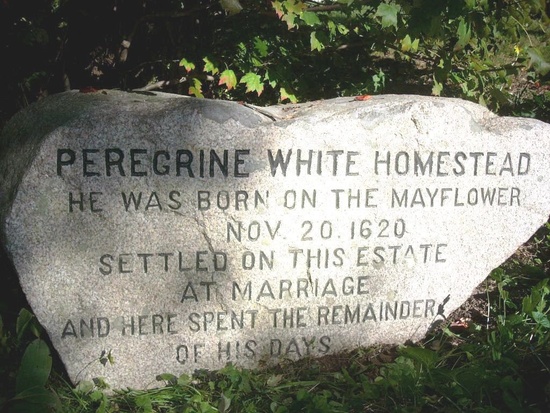 But Sarah and Peregrine were destined to have a long marriage. They lived in Marshfield, Massachusetts on land that William Bassett gave to them when they married.  Peregrine, besides his soldiering, was a farmer and he did well, expanding his land. He and Sarah had seven children (one dying in infancy) and lived their entire lives on the land in Marshfield.

Imagine my surprise to discover that the land of the homestead is for sale.  If anyone would like to build a true Thanksgiving home,near the Atlantic with a view of a river, and a claim to history, check out this listing on Peregrine Drive in Marshfield, Massachusetts. 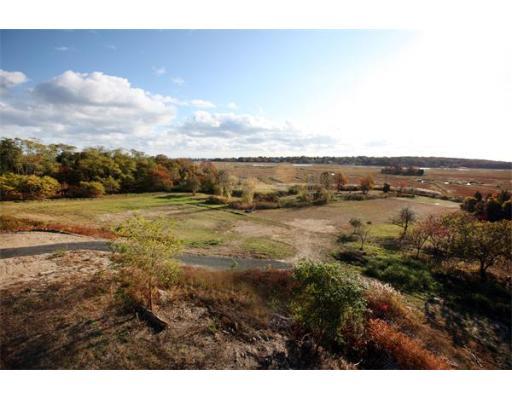 But wait, there’s more.  Sarah and Peregrine’s home, built in 1648, still stands. No doubt it has been altered considerably, since it is not protected by historic status. But it was for sale a few years ago, so there are pictures of it all over the Internet. (It is not for sale now despite misleading information on the Web.) 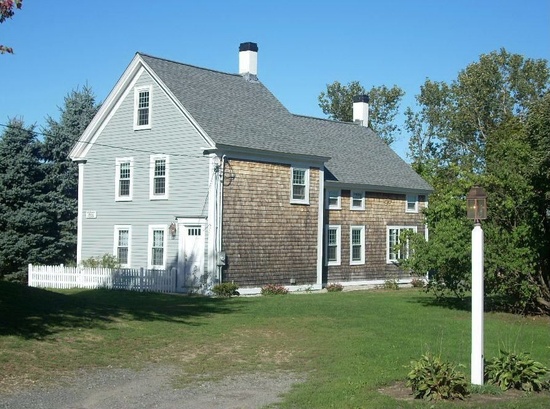 (Other sources are linked above).

There is no end of information about Peregrine White on the Internet, and most of those sources mention Sarah Bassett as well.  I started, as usual, with birth,death and marriage records at Ancestry.com