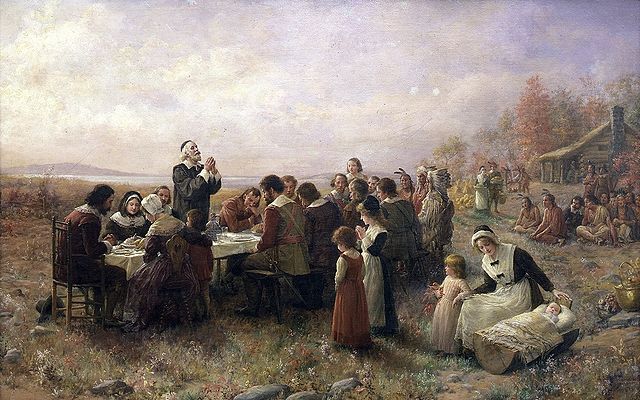 “The First Thanksgiving at Plymouth” (1914) By Jennie A. Brownscombe
Date 1914. This painting is in the public domain.

If you are worried about having a traditional Thanksgiving feast–fuggeddiboudit.  You really don’t want to have to prepare and eat what the Pilgrim fathers ate.

Although I have seen sources that say they did not have turkey, William Bradford specifically mentions turkey in the 2nd quote below. We know they had venison and  waterfowl  and no doubt plenty of fish and shellfish.

“our harvest being gotten in,our governour sent foure men on fowling, that so we might after a  peciall manner rejoyce together, after we had gathered the fruits of our labours ; they foure in one day killed as much fowle, as with a little helpe beside, served the Company almost a weeke, at which time amongst other Recreations, we exercised our Armes, many of the Indians coming amongst us, and amongst the rest their greatest king Massasoyt, with some ninetie men, whom for three dayes we entertained and feasted, and they went out and killed five Deere, which they brought to the Plantation and bestowed on our Governour, and upon the Captaine and others. And although it be not always so plentifull, as it was at this time with us, yet by the goodness of God, we are so farre from want, that we often wish you partakers of our plentie.”

Hot rolls? Nope. No wheat. Maybe some Indian Bread made from their “Indian Corn”.


(After they harvested their crops) For as some were thus imployed in affairs abroad, others were excersised in fishing,aboute codd, bass, other fish, of which yey (they) tooke good store, of which every family had their portion. All ye somer ther was no want. And now begane to come in store of foule (fowl), as winter approached, of which this place did abound when they came first (but afterward decreased by degrees). And besids water foule, ther was great store of wild Turkies, of which they tooke many, besids venison, etc. Besids, they had about a peck a meale a weeke to a person, or now since harvest, Indean corn to yt(that) proportion.

Mashed Potatoes? Nope. They had not made their way up form South America yet.

Cranberry sauce? Nope. It requires sugar. They had brought some with them, but their stock had not been replenished. Maybe their Wampanoag Indian guests showed them how to make and eat pemmican–which contained cranberries, and with meat it also would have been a stand in for mincemeat. But they would have a plenty of fruit.

Cabbage and wild spinach grew in the area, but the greens may have frozen out by then. They no doubt grew some garden vegetables from seeds brought from home such as carrots, parsnips, etc. They probably grew beans and kept them stored, so they could have had a pot of beans.

Pumpkin could well have been on the menu–just not a sweetened flour-crust pie.

William Hilton, who arrived on the Fortune shortly after that Thanksgiving feast [as did my ancestor William Bassett], gives us a picture of what foods were available, including wild grapes and berries.

…the country very pleasant and temperate, yielding naturally, of itself, great store of fruits, as vines of divers sorts in great abundance. There is likewise walnuts, chestnuts, small nuts and plums, with much variety of flowers, ro ots and herbs, no less pleasant than wholesome and profitable.
No place hath more gooseberrries and strawberries, nor better.
Timber of all sorts you have in England doth cover the land, that affords beasts of divers sorts, and great flocks of turkey, quails, pigeons and partridges;many great lakes abounding with fish, fowl, beavers, and otters.
The sea affords us great plenty of all excellent sorts of sea-fish, as the rivers and isles doth variety of wild fowl of most useful sorts
…Better grain cannot be than the Indian corn…

All these quotations were found at the Pilgrim Hall Museum site.

1 thought on “Pilgrims’ Thanksgiving In Their Words”