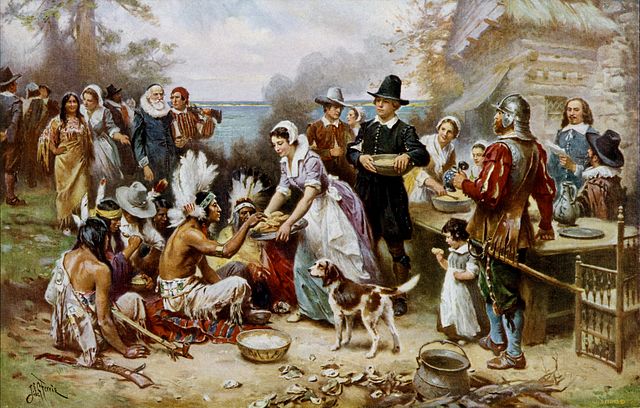 Jean Leon Gerome Ferris – United States Library of Congress’s Prints and Photographs division. It is in the public domain

NOTE: This post was written in 2014 when information about Susanna’s roots were hazy and genealogies contradictory. In 2017, new research done by Sue Allen and published in the book The Search for Mayflower Pilgrim Susanna White-Winslow, proved her father was Richard Jackson of Scrooby England and filled in other details of her life. I have made some changes here to reflect the new findings.

Susannah Jackson was born in England about 1592, but she left all that was familiar to move to Leyden Holland* with her family and a group of people who disapproved of the Church of England. These Reformists were in danger of being jailed for their dissidence in England, and it was illegal for them to leave the country, but they finally decided leaving provided the better opportunity. In Leyden, the little English-speaking community lived in the midst of the Dutch for eleven years.

William Bradford wrote of the difficult decision to emigrate:

“But to go into a country they knew not but by hearsay, where they must learn a new language and get their livings they knew not how, it being a dear [expensive] place and subject to the miseries of war, it was thought by many an adventure almost desperate; a case intolerable and a misery worse than death. Especially seeing they were not acquainted with trades nor traffic (by which that country doth subsist) but had only been used to a plain country life and the innocent trade of husbandry.”
William Bradford


In Holland, about 1614, Susanna married fellow Reformist,,William White. Their first son, Resolved, was born in Holland.

Since they could not return to their own country, the idea surfaced that they might sail across the Atlantic to an English Colony, so Susanna, several months pregnant and with a four-year-old in tow, joined her husband on the dangerous voyage.

Here was Susannah, pregnant and trying to keep track of 4-year-old Resolve on the rolling decks of the little wooden ship. The challenges had just begun.

Although they had headed for Virginia, they wound up having to land at Cape Cod. The men went ashore, looking for food and for a place to build a settlement.  The women and children lived on board the ship for two more months. During that time, Susanna made history by giving birth to her second son, Peregrine White. The little boy was the first child born to the Pilgrims in the New World.
Despite the excitement of the birth, the women were no doubt thoroughly sick of that ship by now.  But when they finally got on land they faced a horrible winter during which half of their number, including Susanna’s husband, died.

Those that survived the winter, the “Starving Time” managed to plant and gather and feel blessed by the following fall. So they held a three-day feast. Rather, the men decided to invite the indigenous people to join them in a feast. The women’s role would be to prepare the food.

Of the 102 Pilgrims who had arrived on the Mayflower, only 63 remained by fall of 1621.  Susanna was one of only four women, plus five teenage girls.  So we can be absolutely certain that Peregrine’s mother was one of the cooks for the Thanksgiving feast. And those women and girls cooked for 91 Indians and 22 Pilgrim men (plus a few children like Resolve and Peregrine and nine adolescent males). I’ll never complain again about cooking Thanksgiving for ten people.

What stories Susannah had to tell her grandchildren–the children of my ancestor Sarah Bassett and her husband,  Peregrine White!

Leaving her own country, living abroad, sailing across the Atlantic when she was pregnant, giving birth to the first child in the colony, losing one husband and marrying a 2nd in the first marriage on the continent, being a key figure in the first Thanksgiving feast, and living to raise a family and a community in the new land. What a story.

I have great admiration for Susannah and the women like her who settled this country.  Although she is not a blood relation, I will definitely be giving thanks for her along with my family members this Thanksgiving.