In the small town of Danville, Ohio, St. Luke’s Catholic Church is a long time institution.  In fact, the original St. Luke’s in Danville was one of the oldest Catholic churches in Ohio.  A couple from Maryland, George and Catherine Sapp moved to this area of Ohio, and several families from their Maryland congregation and one nearby–St. Ignatius in Mt Savage and St. Mary’s in Cumberland–followed. The settlement they started was known by their name, and the Sapps donated the land for the first church, a log structure built in 1824.

One of the people who later joined this Catholic Community was  Henry Butts, my great-grandfather, who had been born in 1835 in Pennsylvania. Henry, a day laborer and farmer, fought in the Civil War when it started. He and his wife, Ann Marie Smith Butts were devout Catholics, and there are family stories of how Ann Marie walked to church, many times carrying her small children. 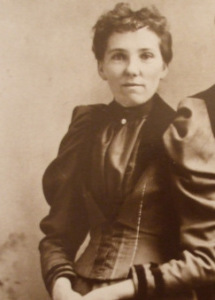 So it must have been a great shock for the family when they learned that their daughter, Mary Isadore was pregnant with an illegitimate child. Pictures of “Mame” and the stories that my father told about her give no hint of a rebellious nature.  On the contrary, she looks very meek. How embarrassing it must have been for her to stand in front of the congregation of friends and neighbors with the father of the child, George Sapp as their illegitimate child was christened May 8,  1892. The church record says she was born September 18, 1891.

Was this George a member of the family that had started the church? Judging by census records, he was not a son of the original George and Catherine, and if he was related, I have not been able to prove it, since there are more George Sapps than you might imagine.

The question of why George and Mary did not wed is only one of the many mysteries about K/Catherine Sapp/Butts.  This aunt on my father’s side, is shrouded in mystery.

Why Did George and Mame Not Marry?

Did the Butts disapprove of George? On the christening record at St. Luke’s church, it identifies George as “non-Catholic.” Very strange, if he was related to the family involved with the church. Perhaps he was the black sheep of the family and the Butts family wanted to keep their daughter from him.

Is it possible that the Sapps did not approve of the Butts family?

Was George already promised to another?

What Was Her Name?

( UPDATE:  More about her various names in this new post from March 2000)

Then, there is my mysterious aunt’s name.  The Ohio Birth Records say that her name is Casalena Sapp.  A census report in 1900 has her name as Cathaleen Sapp but in 1910 the census shows her name as Katherine Butts, but since there are Catherines (with a “c”) in both the Butts and Sapp families, Catherine is more likely. (With a bad transcription explaining the “Casalena” and the “Cathaleen”.) 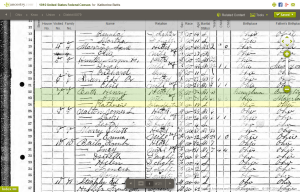 One other clue to her name is the fact that my sister’s middle name is Katherine, and my mother explained to me that she was named for “a favorite aunt.”  I always thought that was an aunt on my mother’s side who she referred to as “Aunt Cath” (although her name was really Caroline). My mother did say, “Of course we changed the spelling to “K” because Catherine with a “C” is the Catholic way of spelling it.” And mother was NOT a Catholic. My sister says she always thought it was an “aunt” on my father’s side.

Catherine an aunt? She was really my father, Paul Kaser’s half sister. Apparently the “aunt” part was a family myth that either my father believed, or maintained to hide the illegitimate child.  As my sister points out, my father was very protective of his mother, so might not have wanted to discuss the truth. On the other hand, he seemed pretty open about other things that happened in his family.

That aunt vs sister thing partly explains the confusion about whether her name is Sapp or Butts. Her father’s name was George Sapp, and her mother’s name was Mary Isadore Butts.  Since she was an illegitimate child, her last name was up for grabs. In fact, just two years after C/Katherine was born and baptized at St. Luke’s Catholic Church in Danville Ohio, Mary Isadore, known as Mame, married Clifford Kaser and  gave birth to four children, including my father, Paul Kaser, born the year after this picture was taken. 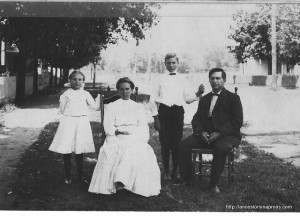 Meanwhile, George and Mary Isadore (Mame) did not want to get married, so when Mame married Clifford Kaser in 1893, and Cliff–apparently not the most tolerant of husbands– did not want to adopt the little girl. So the toddler C/Katherine stayed with her grandmother and grandfather, Henry Allen and Ann Marie Smith Butts. In the 1900 census, the little girl is listed as Cathaleen Sapp, but in the 1910 census, she is 18, listed as a dressmaker, and her name has changed to Katherine Butts.

Where Did She Go?

It came as a surprise to discover her name in this 1910 census, because up until now I had believed the family tale. “A History of the Henry Allen Butts Family” written for a family reunion by Rev. Homer Blubaugh, says:

“Catherine was not accepted by her stepfather [Clifford Kaser], so lived with Ann and Henry Butts, her grandparents, until age 16.  One night she walked out of Henry’s house without saying ‘goodbye’ and is never heard from again by anyone in the family.  Mame’s sister, Rosalie, was there that evening and remembered her quiet disappearance.”

Rev. Blubaugh’s history is a combination of research from original documents and family hearsay, so the age at which the girl disappeared is not the only thing he got wrong. But disappear she does.  I can find no trace of her after that 1910 census.

How on earth will I ever track down the movements of a young woman who wanted to disappear–particularly when I have no idea what name she might have been using? This is where it would be nice to have a long-lost cousin pop up with a clue as to what happened to Casalena/Cathaleen/Catherine/Katherine Sapp or Butts or some other name she assumed when she left the only home she had known. Help??