When I wrote about my great-grandfather Henry Allen Butts last week and week before last, I was not sure that I had identified his twin brother George. Some  evidence says that he may be George W. Butts, and I at least know a little bit about his short life if he IS George W. Butts. On the other hand….. 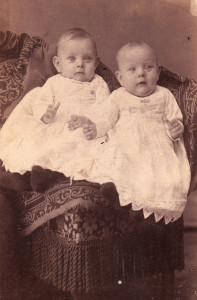 These are NOT the Butts brothers. These are twins from 1886 in a photo from the Green County Pennsylvania Photo Archive. Used with creative commons license.

Records abound for George Butts’.  Unfortunately, few of them match the known birthplace and dates of my great-uncle George, my great-grandfather’s twin brother. WARNING: Inside baseball ahead.  If your eyes glaze over at the details of tracking family history, you may want to skip to Henry Allen’s letter home.

Even though I have  not been able to find official baptism and birth records for a George OR a Henry Allen Butts born in Louden, Franklin County, PA, the Butts family Bible that lists “John Henry Augustus born 29th November 1834,” says, “George was born on same day five hours apart. Was baptized January 15, 1835 by Priest (He ? en.).”[As I mentioned in the article on Henry Allen, the family histories are all consistent in saying that John Henry Augustus became Henry Allen. Census reports confirm both boys born in 1834/35.]

This list of the family members and their ages is confirmed by other sources. Apparently their father died between 1840 and 1850 and all the boys except the youngest must work to support the family.  Their mother Esther, would have been 52 at that time.

Interestingly, in the same township census there is also a George Butts, 16 years old, born in 1834 [Census ages are frequently a year off because the census taker calculates from birth year rather than taking into account birth month]. This George Butts is living as a laborer with the Jacob Huber family.  I imagine it is quite possible that both families would list him with them, as laborers worked on a seasonal basis. So while he was literally with the Huber family at the time of the census, his own family considered him a permanent resident. 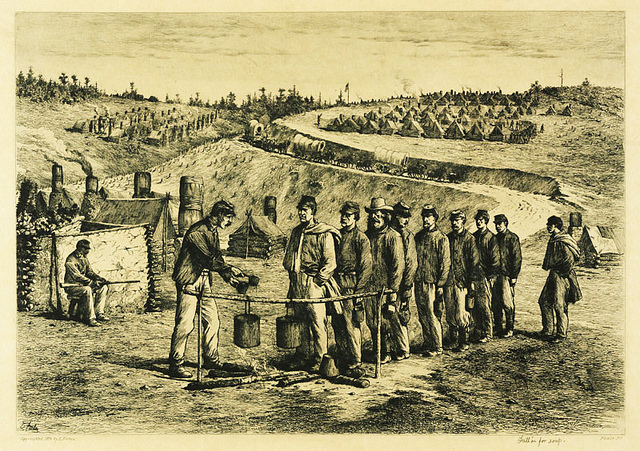 Drawing of Union Army soldiers lining up for soup. Click for more information. Citation below.

There are several men named George Butts in the Civil War rolls of Pennsylvania. A distant cousin who shared her research with me ten years ago, believed that George W. Butts is buried in a Church yard in Franklin County PA. That man’s birth date is almost correct on the tombstone  the aforementioned cousin tied together that deat with the George W. Butts listed on Union Army rosters.

George W. enlisted in the 3-month volunteer 2nd Pennsylvania Regiment, Company C on April 20, 1861 and was mustered out with his company on July 26, 1861.   Later in 1861, a George Butts enlisted in the 77th, but he is not designated as George W. Butts. Unfortunately the Veteran’s Burial Card from National Archives found at Ancestry.com says that George W. Butts was born in 1841. (with the same death date that we have for George W.)

George W. Butts, Civil War soldier, is buried in a Lutheran Cemetery in St. Thomas, Pennsylvania, Plot #294.  The tombstone, according to the Butts cousin says he died May 21, 1863 at 28 years, 3 months and 22 days old.  That does not quite match up with either the Butts family Bible or the Veteran’s Burial Card, which says he died at 21 years old. Furthermore, we know the family was Catholic and he was baptized by a priest, so why would he be buried in a Lutheran Cemetery? That as well as the birth date shown with the death record casts  doubt on George W. being the correct George.

All of this points to the fact that I probably spent a couple of days pursuing the wrong George.

Uncle George, Are You George M??

The History of Pennsylvania Volunteers, 1861-1865, lists a George M. who enlisted 9 October 1861 as a Corporal in Company F, 77th Infantry. Again, this is Henry Allen’s company, and it seems logical that the twins would enlist in the same company at the same time. However, the list includes no further information to help track George.

So there we are. Stuck. He was born a twin to Henry Allen Butts on a known date in a known place. I know his parents’ names and that he was working as a laborer at the age of 15 to help support his widowed mother and her large family. Everything else is speculation. Do you have more information on George Butts? Where do you suggest I go next?