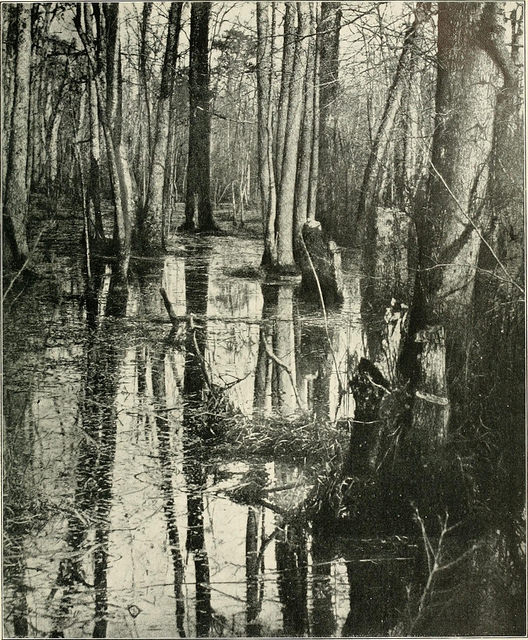 Image from page 29 of “The soldier in our Civil War : a pictorial history of the conflict, 1861-1865, illustrating the valor of the soldier as displayed on the battle-field, from sketches drawn by Forbes, Waud, Taylor, Beard, Becker, Lovie, Schell, Crane, 1893

The third surviving letter from Henry Allen Butts to his wife Annie was written only a day after the 2nd letter.

In letter two, he had referred to a long march, and now he tells about it. First he repeats what he said in letter two–his joy at finally receiving letters from home and he explains:

“…it is now three months since we had a chance to write. wen we was on the raid we could not send eny letters for we had no comunication. You must not think that we can write a letter and go to the post office like we do at home. We must wait till we get to a place that we can send a letter.

The 43rd Ohio Volunteers, part of Sherman’s army, have joined the armies of other generals and a total of 90,000 men are camped near Goldsboro.

Pvt. Butts has been  fortunate, but has experienced some horrendous situations.

Now i will give you some history of our march through confidercy. We left beaufort on the 13 of January and we have bin marching ever since up to this time. About 75 miles this side of beaufort is wear Stull (Jerimiah Stahl) was killed. The fight comenced on the 2 of febuary. That is the day that Col. Swayne has his lague shot off. He was about fifty yards from me wen the canon ball hit him.

Lt. Col.Wager Swayne, who lost his leg at the Battle of Rivers Bridge

Col. Swayne is Lt. Col. Wager Swayne, a Yale graduate. By the end of the war, he had been advanced to Major General of Volunteers and Brevet Major General in the regular army. He won the nation’s highest honor, the Congressional Medal of Honor. for an earlier battle, Corinth, Mississippi. Quoting from the web site Lybarger’s Civil War:

“A lieutenant colonel in the 43rd OVI during the second Battle of Corinth that mortally wounded Col. Smith, Swayne became its colonel after Col. Smith died. On Feb. 3, 1865, Swayne was severely wounded while crossing the swampy Salkahatchie River in South Carolina. While helped to an ambulance wagon, he kept repeating, ‘The Lord sustains me.’ He was successfully evacuated to New York City, losing his leg but surviving.”

The battle was the Rivers Bridge part of  Campaign of the Carolinas , and General Sherman had divided his troops, 5000 strong, with those under Swayne circling through the swamp to flank the 3000 Confederate Troops who were trying to prevent the Union Army from crossing the Salkahatchie River. Besides a vivid and gruesome account of what it was like to be in this battle, Henry Allen returns to the subject of the death of Jerimiah Stull/Stahl.  Henry Allen’s mother was Esther Stahl Butts, so there is a strong possibility he was related.

We marched on the skirmish line and thear we had to stand in the swamp in water up to our nees till about 12 o’clock at night wen we was releved. The next day being the 3(rd) we was ordered to charge the battery.

We charged it about three o’clock in the evening. That is about the time Stull(Stahl) was killed.  We had to charge up a road through the swamp and thear was water on boath sides of the road. Stull was at the side of the road wen he was shot and he fell in the water.  The ball hit him in the side and went through him.

Wen he fell I was about 20 steps before him. Wen he fel all he said ‘help me out’. Thear was one of our co(mpany) boys by the name of Short close to him wen he fel. He helped him out. He was dead. He was bured on a hill. Him and five others was bured side and side. I did not see him after he was killed.  he is under the sods of South Carolina and I hope he is at rest. Tell Mrs. Stull (Stahl) he was bured as dessent as we could bury him. Tha made a box for him.

His brother William was not with us wen he was killed. He is at Hilton Head, S.C. in the hospital tending to the sick. I don’t no weather he herd of it or not.

An account I read of the battle said that soldiers tending to the wounded had to hold their heads up so they would not slip into the water and drown. It was a morass of blood and death. And Henry Allen, who had twice closely missed being shot, escaped at least one more time.

Obid Underwood was close beside me wen he had his arm shot off. He was sent back to Beaufort. I have not herd wether he is living or not.  I suppose you no more about it than I do my Dear.

We had a hard time since we left Beaufort. I seen more than I ever want to see agane. We have seen hard time. We marched five hundred miles. Some of was bare footed, others nearly naked. We was the hardest looking set of men you ever seen, but now we have plenty of clothing and plenty to eat.

He closes once again saying that he will write when he has a chance. They have been told that they will stay here for some time. The Army marched north to Richmond to join with Grant’s army at the beginning of April.

Obid Underwood is Obediah (Obed) Underwood who was in Henry Allen’s Company. He did survive the war after having his arm amputated at the shoulder. 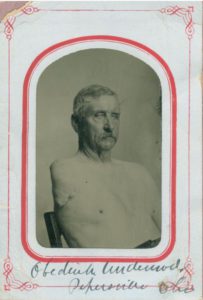 According to the web site Lybargers Civil War , there was a Grand Encampment of the Grand Army of the Republic in Mt. Vernon, Ohio in 1897. Since that was very close to Henry Allen’s home, he very well might have been there. Lt. Col. Wager Swayne, who Henry Allen saw injured, was in attendance.

2 thoughts on “Henry Butts’ Civil War Letter 3: Swamp Water Up To Our Nees”