My great-great grandfather, George Kaser was a mystery to me until an accidental discovery, which I described last week when talking about my great-grandfather Joseph Kaser II.  That discovery led to several more records unmistakably George.

While our ancestors always remain something of a mystery–particularly without journals and letters to hear their voices, the bare facts of census reports and church records have shown me where George Kaser’s loyalties lay.  He stayed loyal to his extended family. He was loyal to his culture and the German language. He was a supporter of his church.

This is a huge help, since those records as indexed include lots of the Kaser names we’re working on, but to see the entire record, I’ll need to go to the LDS Family Research Center. The index tells me that George was born on February 2, 1800 and baptized on April 11, 1800 at Zions Lutheran Church, a German Reform congregation in Zionsville, Lower Macungie Township, Lehigh County, Pennsylvania.The history of that church is here.

George’s grandparents had emigrated not too long before his father Joseph Kaser I was born.*  Although I have not looked for immigration records yet, it seems obvious that the family first arrived in Philadelphia, Pennsylvania.

Philadelphia’s Independence Seaport Museum has numerous displays of great interest, particularly if your ancestors arrived through Pennsylvania’s port.  When I visitied a few years ago, museum personnel had to come looking for me and persuade me to leave at closing time because I was lost in time looking at exhibits of the people of many nations who poured into Philadelphia in the 18th and 19th centuries. (And that was BEFORE I started exploring my own family history.)  Follow this link if you want to visit the museum on line, or plan an in-person visit.

Many of the German families who arrived in Philadelphia had no love for the city.  They were farmers, looking for fertile soil and abundant timber.  Most moved further inland to Lehigh County, first settled by German immigrants in 1735.

There they could build their own log churches in peace, rather than be harassed as they had been in Germany for rebelling against the “high church.”  They could live comfortably with their own customs and their own German language.

The first schools were started by the churches.  Almost all the churches in the area had only German language services and general classes were likewise taught in German. In fact, the first English-speaking services were not conducted until 1891– long after George and his family had moved to Eastern Pennsylvania.

It seems clear that my second great-grandfather, George Kaser, did not speak English at all, unless his younger children, who attended bi-lingual schools taught him a bit.

About 1823, the twenty-three-year-old George Kaser married a woman named Lydia, who may have been twenty at the time. She also had been born in Pennsylvania.

By the following year when their son Joseph II (my great-grandfather) was born, the family had moved to Baden, Beaver County, Pennsylvania, near Pittsburgh. On the map above, you can see the county designated as LEH (Lehigh) on the right and BEA (Beaver) on the far left of the map.  Because of the pattern of this family’s relocations, I will assume that his father, mother and siblings moved across the state at the same time and all settled in Baden together. And it is a good thing they had a big family to help. You see that purplish color in the map below?  That’s the Appalachian Mountains.  And they would have been crossing them on foot, or at the most with a few wagons for the oldest and youngest family members.  “Big Deal. Just moving across the state, you think?”  Think again. 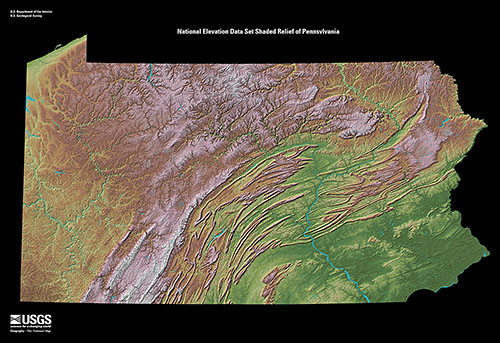 It is quite possible that deed records may show that the family never actually lived in Beaver County, but only paused their briefly so that Lydia could give birth, because all the rest of George and Lydia’s children were born in Ohio. If that is the case, Lydia was traveling in her last weeks of pregnancy on this difficult journey.

As is usually the case in these pioneer families, the children came at approximately two-year intervals, six boys and three girls by 1840.  The exception was the last child, Samuel, born four years after his nearest sibling in 1840, when Lydia was about 40 years old. A surprise child!

At any rate the family moved ultimately to an area on the border of Holmes and Coshocton Counties in Ohio.  At the time of the 1840 census, George’s father Joseph and his wife, George’s three brothers Joseph Jr., Timothy and William are all living near George, on adjoining farms near Bloomfield (Clark), Ohio. The town straddles the Holmes/Coshocton County line.

Although Ohio had become a state in 1803, it was still a rough land when the Kaser families arrived.  The History of Coshocton County points out that as late as 1835 there were still chunks of “unentered” (in other words, wild, unclaimed) land in the county.  They go on to point out that the county’s populations was almost entirely German.

Once again clinging to their culture and their German Reform church, the Kaser clan attended the Zions Reformed Church (now Zion United Church of Christ) in New Bedford, Coshocton County, Ohio. At that time the church was a log building. A new building was built in 1858, and the building that stands today was built in 1889. 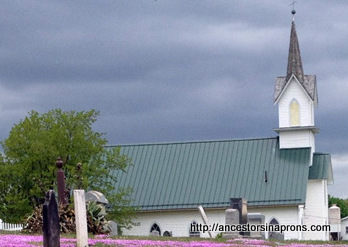 Several of the Kaser burials in Ohio are at a Zions Reform Church. (39 listed on Find A Grave.com) You can see their cemetery plot map here:  (Actually, I was unable to get it to download, so wish you luck. If you decide to visit them, I’m sure you can get a hard copy.)

New Bedford, Ohio is in the northern part of Coshocton County, near Holmes County and logical destination for people who lived around Bloomfield (later called Clark). The Coshocton County history (written in 1881) points out that most of the residents of the township that includes New Bedford were German. and 4 of the 5 churches had services only in German. Plus three more churches just over the line from the township boundary also were German-speaking churches. The New Bedford Zions Reformed Church did not hold all English services until the 1880s.

GEORGE AND HIS FAMILY PROSPER

Life was rough, but the Kasers seemed to prosper (and multiply!).  Twenty years or so after arriving in the wilderness Ohio, the 1850 agricultural census lists George’s assets at a cash value of $1880, while farms around him are valued at $100-$1500.  He had 55 improved and 30 unimproved acres and owns 4 horses, 4 milch cows, 2 other cattle, 18 sheep and 11 pigs.  He raises wheat, Indian Corn and oats.

Seven of Lydia and George’s children are still living at home in 1850, and son Joseph II lives next door in German Township (Later called Clark Township), Holmes County.  Also nearby is George’s brother Joseph Jr.  George’s son Daniel has moved with his 15-year-old wife and infant.  He is working as a blacksmith, but still has a few acres for his two cows and two sheep–necessities of the self-sufficient rural life.

By the time he is 60, George’s holdings have increased in value to $3000, now listed in Clark Township, Coshocton County.  Besides his wife Lydia, his sons George Jr. (23) and Samuel and his daughter Lydia (16) are still living at home.  Sons Charles, Thomas and Joseph all live adjacent and Daniel’s holdings on his farm in Holmes County are increasing. Daughter Rebecca lives with a widower who lives nearby, probably caring for his children.

In 1870, I find George Kaeper (probably misspelling of the original German Kaesser) at 70 years old  living in Monroe Township, Coshocton County with his now 30-year-old son George Jr. and his 26-year-old daughter Lydia.  I will talk about Rebecca and other family members in a separate post.  But George’s wife Lydia is no longer listed.  Apparently she died sometime between 1860 and 1870.  Sons Samuel and Charles live on adjacent farms and Joseph lives nearby over the line in Holmes County.

Although he seems to be moving around, George may well have stayed in the same place while county lines changed, or his farm might have extended over the county line and was sometimes counted in one place and sometimes in another.

Here are the Holmes and Coshocton maps of counties by today’s names. (Clark, Holmes, was previously called German). To line them up, Crawford Township, Coshocton should be directly south of Holmes Clark Township. 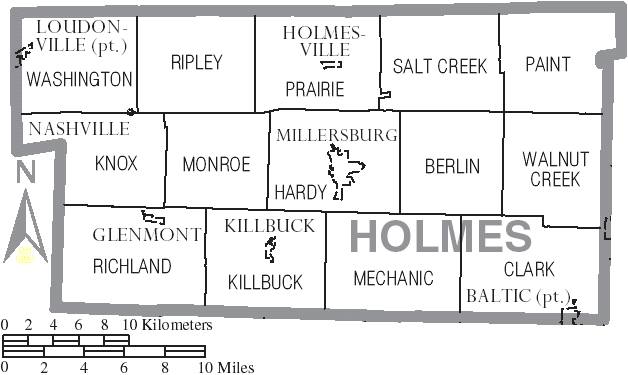 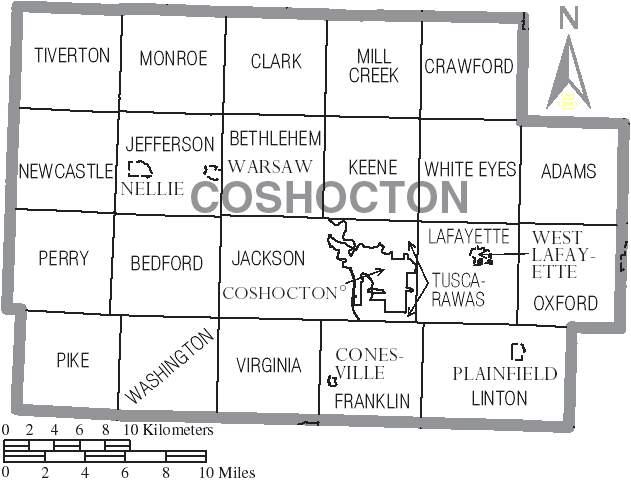 The 1870 Census is the last record I have found of George, so he probably died some time in his 70s.

*I am calling George’s father Joseph I to differentiate him from George’s son, Joseph II and George’s brother, Joseph Jr.

5 thoughts on “The Values of George Kaser”