Rebecca Jane, always known in my family as Aunt Jennie, was the youngest of the six children of Henry Allen Butts and Anne Marie Smith Butts.  She was born in Danville, Ohio on August 7, 1874, just one year after Ann Elizabeth Butts (Bessie). Jennie outlived all her siblings by many years, which partially accounts for the fact that she was the only one of the Butts family that I ever saw in person.

My brother, my sister and I all remember visits with our father, Paul Kaser, to his Aunt Jennie in her rather old-fashioned home at 310 Coshocton Avenue in Mt. Vernon Ohio. (My sister, ten years younger than I, remembers her being REALLY REALLY OLD.)  She was a sweet and lovable person, and I imagine that my father was drawn to her because he had lost his mother, Mary Isadore (Mame) so early in his life, and Jennie was his reminder of Mame.

It seems strange that my family never interacted with members of the Butts family other than Jennie. Age had a lot to do with it. Although the brothers Frank (b. 1871) and Monas (b. 1867) lived into the early 1940s so I might have met them when I was a toddler, Mame, Bessie and Giles all died before I was born.  Apparently my father did know Giles, who died in 1936, because he mentioned his Uncle Giles. The three men in the family all had children, so my father had cousins, but he did not seem to know them. 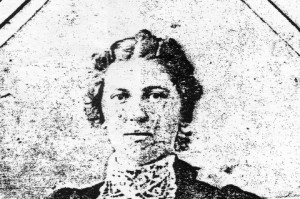 I am indebted to Helen Findon for this photocopy of the only picture of Jennie in her youth that I have. Probably circa 1920.

Jennie married Philip Dawson  on January 25, 1898, when she was 23 years old and Phil was 2 or 3 years older.  On census reports, it appears that Jennie “adjusted” her age so that she appeared to be only one year older. (My mother–older than my father– did the same thing for many years, even giving the wrong date to the federal government when she signed up for Social Security.)

Neither Phil nor Jennie had gone beyond 8th grade in school, but Phil eventually settled on a career as an insurance salesman and they settled in Mt. Vernon, Ohio, in her home county of Knox County.

Aunt Jennie and her husband Phil Dawson had no children, and I do not know what occupied her time in Mt. Vernon.  I need to check newspapers and see if she was involved in any organizations or social life. 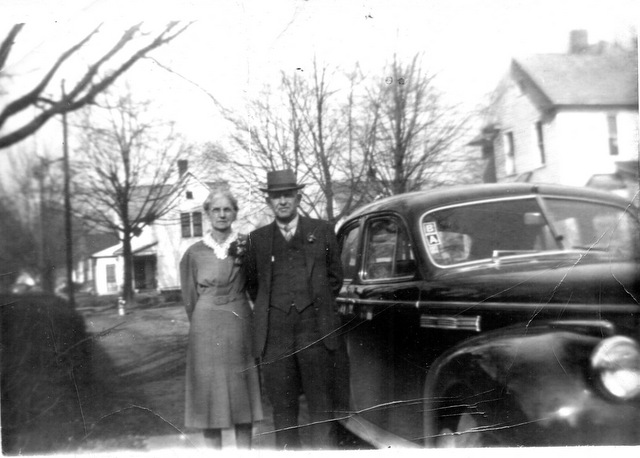 Jennie and Phil Dawson January 25, 1943 on their 45th wedding anniversary. 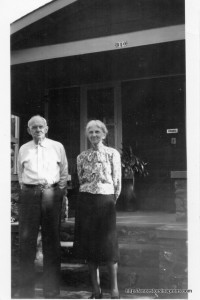 Phil died in 1951 when he was 75 years old, but Jenny lived to be ninety-four years old, dying in November 1968. She is buried at Mt. Calvary Cemetery in Mt. Vernon.

While I cherish the memory of knowing Aunt Jennie, I regret that I did not spend more time with her when I was high school and college age, when I still lived in Ohio. And since I moved away from Ohio in 1963, I was not able to visit with her in her later years when she lived in nursing homes.

Note: According to the Rev. Homer Blubaugh family history, Rosina (Weber) Butts, who was married to Giles Butts youngest son, Purcell,”cared for Jennie in her later years at several nursing homes. ” 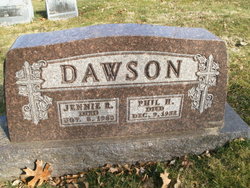