Since I have not yet satisfied myself that I know for sure who my 4x/5x great-grandfather is–the first who landed in America– I am going to talk about conditions that would have affected him, whoever he is. In discussing the arrival of German Immigrants in Pennsylvania in the 18th century, I am touching on the theme suggested by Amy Johnson Crow for this week’s 52 Ancestors challenge--Stormy Weather.

It is going to take a lot more time and research to ferret out whether William Caser/Kaser, who reportedly traveled to America via Ireland and Switzerland with his father Timothy or Peter Kaiser/Keyser/Kaeper was the father of Joseph Kaser, who I believe was the first of the line to be born in the United States. [NOTE: August 2021, I am now fairly certain that Peter Kaiser was the father of Joseph, and Peter’s father, Nicholas came with Peter to North America. I am following that line of research.]

But in the mean time, I explored why German immigrants came to the United States in the 18th century, and how they came.  The easiest conclusion of all this research is that whoever the first Kaser (however they spelled it at the time) was they no doubt arrived through the port of Pennsylvania. Their arrival is described in great detail in the book German Immigration into Pennsylvania through the Port of Philadelphia from 1700 to 1775.  I read other sources, all of which reinforced the picture painted by this book. (More information below in notes on sources.)

WHY DID THEY COME?

The German peasants had some of the same motivations as the English farmers who arrived in Colonial America.

In the old country, they worked for “the man”–farming on shares, not able to own land, and with little hope of ever improving their lot.  No matter which of the many separate German states they hailed from, land was getting scarce, and when a father died, his sons smaller and smaller pieces of the land allotted by some lord.

Depending on where they lived, they were expected to follow the state religion, whether that be Catholic or Lutheran.  Although we may think of the early Lutheran church as the reform church, it was in fact very restrictive and intolerant of deviation. Thus a Lutheran Reform and/or German Reform church grew up, similar to the Mennonite religion of people who followed Menno SImons.  And those were only a sampling of the many religious splinter groups who wanted to live where they could choose how to worship rather than being dictated to.

Escape from the Storms of War

When the earliest immigrants from Germany trickled into the New World in the late 17th century, they had suffered their entire lives–and their parents lives and their grandparents lives– from a seemingly endless war in Europe.  As is often the case, the poorest people were the most damaged victims of those wars.

Answered the Call of Recruiters 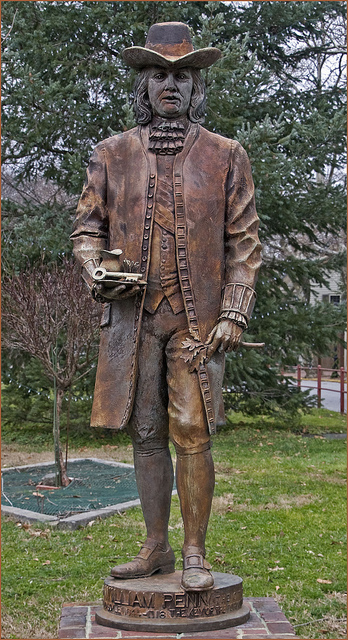 A large colony. Plenty of unsettled land. The need for workers to settle and cultivate the land.  That sent owners of large blocks of land to the printers to produce brochures extolling the virtues of Pennsylvania.

And did you know that William Penn himself was one of the most successful recruiters for his namesake colony?  He not only printed numerous pamphlets, but he personally traveled all over Germany (which was generally called The Palatine, a name that applied to the area south of the Rhine).  He may have spoken German, but besides that, his Quaker religion was sympatico with the reformist religions, particularly followers of Menno Simon. He promised the Germans freedom of worship as well as economic opportunity. (He probably did not mention the native people who were still trying to drive off European settlers by attacking and murdering settlers. More than 300 German settlers were killed by natives between 1754 and 1763, the time period when my ancestors probably arrived.)

How could these poor farmers afford to travel?  Many could not.  Investors, some plainly shysters, offered them a deal they could not refuse.  In exchange for paying for their passage, the investor would get a certain number of years of labor from the immigrant. A man who was too old to do the labor, could sign up a son or daughter instead.  Elsewhere, they were called indentured, or bondsmen. Here they were “redemptionists,” bound to work without pay for whoever bought them when they arrived, until they paid off their debt. The book suggests that four years would be sufficient to pay off the debt.  Newspapers of the day carried ads about the sale of redemptionists that sound the same as the sale of slaves. The system thrived between 1730 and 1776.

While most of the “redemptionists” were honest workers, some were criminals, because the German states were quite willing to empty their jails by turning over the inmates to these Pennsylvania investors. This, of course, added to the problems of the colonial government, and added to the prejudices against the immigrants.

This of course opens another question about my own ancestors–did they come on their own steam, or were they redemptionists?

A journal by a historian named Proud in 1798, gives the reasons that people immigrated, as mentioned above and goes on “with this they acquainted their friends in Germany; in consequence of which many of them in the year 1717, etc., removed to Pennsylvania.” Reading about the difficulties of the voyage and life upon arrival makes me realize how truly awful their life had to have been in Germany for them to tell their friends they should follow.

In short, it was far harder for the German immigrants to get to America than it was for the English pouring into New England.  Their conditions were just short of being as onerous as those on slave ships. The Germans were coming of their own free will, and were not in chains, but a comparable number died in passage, lost any belongings they set out with, and arrived as indentured servants.

William Penn himself recommended that late autumn to mid-winter were the best times to depart from Europe.  In fact, most arrivals were in April, May and September through November, with as many as six to nine ships per week arriving in Philadelphia. Those sailing times avoided the worst storms on the Atlantic for the six to nine-week voyage.

Penn tried to honestly share helpful information in his bulletins to passengers, as in this advice on keeping healthy on board. Reading between the lines you can realize how awful the trip would have been.

To render it more healthy, it is good to keep as much upon Deck as may be; for the Air helps against the offensive smells of a crowd and a close place.  Also to Scrape often the Cabbins, under the Beds; and either carry a store of Rue or Wormwood; and some Rosemary, or often sprinkle Vinegar about the Cabbin.

There were no bathrooms. Conditions were unsanitary. Typhoid was common.

Food was a problem.  A letter from a passenger from Rotterdam in February 1732 explains that after the captain stopped at Martha’s Vineyard instead of sailing to Philadelphia, the ship ran out of food. For eight weeks, five people had to share one pint of meal per day and a quart of water each.  They had to pay for extra food, like rats (1 shilling 6 pence) or mice (6 pence), or 4 pence for water.

On the same ship, 150 people started the voyage and 100 died. They had signed a document written in English, which they could not read promising to pay for the voyage not only for themselves, but for what was owed by anyone who died on board. The ship was named Love and Unity.

For a short time in the early 18th century, the British Queen Anne had promised to pay passage for farmers in Germany heading for British colonies.  However, so many Germans showed up on her doorstep that the offer was cancelled. Suddenly hordes of Germans arrived in Britain and left again for North America without any proper documentation.

This concerned the Governor of Pennsylvania, who feared they would be likewise undocumented (and lawless) upon arrival in Pennsylvania colony.

..so in the same manner they behaved here, without making the least application to himself or any of the magistrates. That as this practice might be of very dangerous Consequence, since by the same method any number of foreigners from any nation whatever, as well Enemies as friends, might throw themselves on us.

Thereafter the immigrants must sign an oath to the English ruler, although many could not speak or read English, and some religions forbade taking oaths.

Later, a head tax was imposed on aliens, clearly aimed at the Germans, as they were the most numerous.  It seemed small, but could be a barrier to the poorest immigrants. (12 pence for taking the oath and 40 shillings for obeying the law).

The fact that the Germans clustered together in German-speaking communities, scared some of the English colonists–even the redoubtable Benjamin Franklin. Here are excerpts from a letter he wrote to a friend in 1753 regarding the Germans in Pennsylvania .

“Those who come thither are generally the most stupid of their own nation…, and few of the English understand the German language, and so cannot address them either from the press or pulpit…Not being used to liberty, they know not how to make modest use of it… 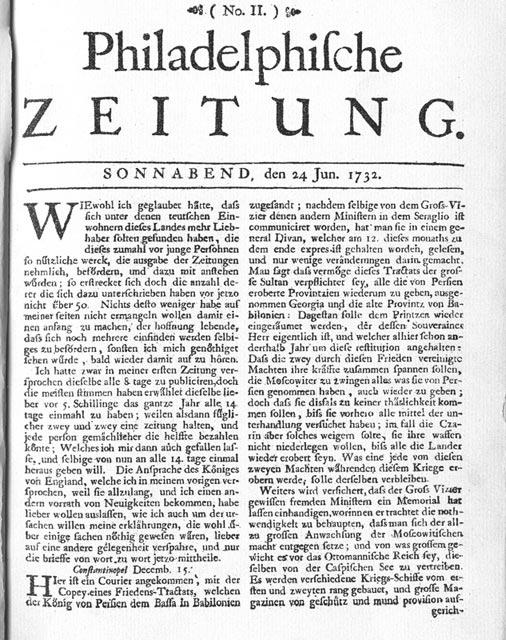 Early issue of the first German Newspaper published in the new world. 1732. Image from Library of Congress

Franklin contradicts his indictment of the Germans as “stupid” when he says there are six printing houses in Pennsylvania–two in German only, two half German and half English and two in solely English. Wonder if he knew Peter Zenger, whose law suit was to establish freedom of the press in the United States? Zenger came from the Palatine as a redemptionist, started a newspaper and made history.

It bugs Franklin that the street signs in Philadelphia are in both German and English and he worries that  so many Germans, “will in my opinion be not able to preserve our language, and even our government will become precarious.”

The site, Look Backward presents a clear picture of the immigrants  arrival, using as their source: Pennsylvania Germans, A Persistent Minority.

German Immigration into Pennsylvania through the Port of Philadelphia from 1700 to 1775, self-published by the author, Frank Ried Diffenderfer of the Lancaster County Historical Society in 1900. This book is available at archives.org You have your choice of formats, if possible, download the book in a format that allows you to see the wonderful drawings that enrich the story.

Roots Web article includes detailed information about immigrants from the Palatine, including a detailed quote about the horrors of ship board existence.

Other helpful sources include county histories, mostly available at archives.org or at Google Books.

Although I haven’t delved into this list myself, the Library of Congress has a guide to books and other information useful to those researching German immigrants, called German Immigrant Arrivals.