Last week I talked about the tough times German immigrants  faced becoming Americans.  I was tracing my father’s paternal line–the Kasers.  My father, Paul Kaser’s German ancestors on his mother’s side had a quite different story. The great-grandfather of Paul Kaser’s mother, Mary Isadore Butts, was the first of that family to set foot in America.

“Mame” Butts Kaser may never have contemplated the way her grandfathers shared the burden of creating a new country. Her father, Henry Butts, was a Civil War soldier. Her grandfather, (John) Henry Butz was listed as a private in Sparks’ Battalion, Pennsylvania Volunteers in the War of 1812. And his father, (Johannes) Wilhelm–William Butts, left Germany with a group of iron workers brought to America by a man named Hasenclever, eventually started his own iron works, supported a large family and served during the Revolutionary War.

The Kasers were Reformed Lutherans; the Butts family were Catholic. The Kasers were farmers; the Butts’ were used to an industrial setting, small towns rather than cities, but not rural life. The Butts’ worked for others; the Kasers wanted to develop their own farms and work for themselves. Both families, however, clustered with people from their own region of Germany and continued to speak their native language.

I want to say at the outset that I could not know this story in so much detail, were it not for the meticulous research and the generosity of Jane Butts Kilgore, who many years ago shared with me what she had learned about our mutual ancestors. 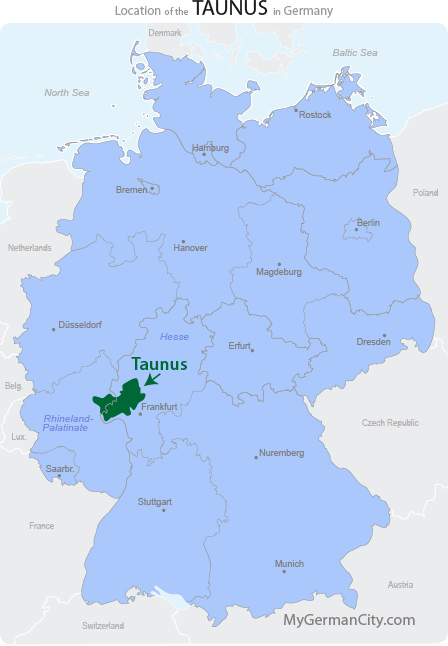 Location of Taunus in Germany and the Rhineland Palatinate.

My three- times great-grandfather, Johannes Wilhelm Butz–known in America as William Butz– was born in the Hessen region of Germany, near the Taunus Hills. I do not know exactly where he was born, but he was listed as from Asbacher Hammer, Germany when he married his first wife, Maria Magdalena Kurtz in Hirschfield, Germany in the Rhineland-Palatinate on November 8, 1761.

Apparently William Butz spent most of his life on the move in search of better jobs. German records show four Butts, probably brothers, settled in the area and moved from one “Hammer” to another plying the family trade.  Hammer means forge and you can find Katzenlocher Hammer, Sensweiler Hammer, Stummenhammer, etc. as place names.

Then a man named Peter Hasenclever came calling. Hasenclever, with backing from English investors, established several iron works in New Jersey.  The workers he recruited in Germany between 1764 and 1767 not only worked with the iron, but built the forges and factories, the roads, the bridges and their own homes, so it took an army of hard-working men of many skills. And all this in a foreign country where they did not know the language and a revolution was brewing. (See a map of a typical forge to see what the workers accomplished.)

Wilhelm Butz and his wife Maria Magdalena had two children while they lived in Germany, Anna Catharina (1762) and Anna Maria (1765). After Anna Maria’s birth on March  4, 1765 (on the same day as my own birthday although one and a half centuries earlier!) and before the birth of their first son, John George in June 1767, the family took passage to America.  Johann Wilhelm had been recruited, along with more than 500 other German iron workers, to come to New Jersey to work in the Hasenclever iron forges.  They lived in Ringwood, New Jersey when the last two sons were born– John Joseph in 1770 and John Henry (my great-great grandfather) in 1772. There they attended the Most Blessed Sacrament Catholic Church.  (Fr. Schneider’s Church is the original part of the church, built in 1754.) 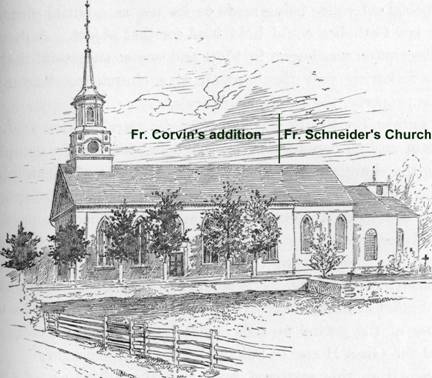 The last half of the 1770’s, a time of turmoil and revolution for the budding new nation, was even more tumultuous in Williams life.  In 1775, Maria Magdalena died, and the following year, he married Magdalen Kuhn and is living in Greenwich, New Jersey at the Chelsea Iron Works, connected to the Durham Furnace.  He and other Butz family were running that Iron Works, but it was being confiscated by the authorities and sold.

According to the Long Pond Ironworks website, The Butz family moved from Ringwood and Charlottenburg to Mt. Hope (all in New Jersey) then to Goshenhoppen in Pennsylvania where they established an iron operation in 1776. Many of the families who had worked in Ringwood, followed them to Pennsylvania.

Ringwood New Jersey is north of New York City, but Charlottenburg and Mt. Hope, presumably the names of forges, no longer exist. Goshenhoppen is now called Bally and is east of Reading Pennsylvania and north of Pottstown.

According to researcher and cousin Jane Kilgore, in 1777 William and his brother Christian, along with a man named Moses Yaman also bought the Mount Pleasant Iron Works in eastern Berks County, Pennsylvania.

At the time that William was taking all these entrepreneurial risks, he had a new wife and children aged 5, 7, 10, 12 and 15.

According to one history site, the Mount Pleasant Iron Works of Berks County was a few miles north of Pottstown, which means it would have been near the Goshenhoppen forge.

The Butts brothers tried to revive the works and called it “Upper Mount Pleasant Forge,” but eventually it failed.

It is difficult to understand how Christian and William Butz could manage these new businesses during the war, because they were also members of the Hereford militia, recorded in May, 1779 and in 1784 (but serving for many more years than the records show). Hereford is the township that contained their Goshenhoppen forge.

A newspaper article written in 1972 (cited by Jane Kilgore, but not identified) explains the unusual nature of the company the Butz brothers joined.

Quoting an article printed during the war, writer Richard Wheeler, describes the “Old Man’s Company” made up of eighty Germans over the age of 40. The man assembling them is 97 years old and the drummer is 84. Instead of going to Valley Forge during the hard winter of 1777-1778, they were guarding men who cut down trees for ship’s masts in western Pennsylvania. Since they were close to home, they spent the winter at home.

Despite the fact they were off serving in the army at least part of the time, apparently the forges  thrived during the Revolutionary War, but the economic depression after the war led to many business failures.  In 1785, the brothers sold the Goshenhoppen forge and in 1792 they sold the Mount Pleasant Forge.

William relocated at least twice more. in 1795 he was living in York County, now Adams County on the southern edge of Pennsylvania across from Maryland. Perhaps, with his children reaching adulthood, he was able to enjoy a few years of rest from his lifetime of hard work before he died in 1805 in Frederick Maryland.

Join The History Girl in a tour of the only existing ruins of one of the early Ironworks.

This map gives an idea all the things the German workers built and how they lived. See a map and pictures of the only one of the nearly 100 iron works that once stood in the Highlands of New Jersey and Pennsylvania–Long Pond Ironworks.

Information about Pennsylvania Forges and Furnaces in this introduction to a collection of the Historical Society of Pennsylvania.

The Palatine Migration :“Whatever happened to Hasenclever’s Germans” by Susan Deeks   from The Highlander, Vol. 34, no. 88 (1998) Ringwood, NJ. Read at Long Pond Ironworks website.

The Family: Letters and a paper “The Family of Johann Wilhelm Butz” (2007) by Jane Butts Kilgore.