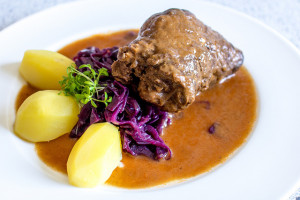 Rinerrouladen with red cabbage and potatoes. Photo from Flickr by Oliver Hallmann.

I grew up with German food.  Northeastern Ohio was settled mainly by English and German immigrants (Amish, Mennonite and other congretations) and we loved our potatoes, noodles, potato noodles, hot potato salad, sauerkraut, and several dishes that I never realized were German. My father’s Kaser family were German immigrants in the 18th century, his mother’s Butts line were Catholic German immigrants and my husband’s Swiss-German ancestors arrived in the 19th century.

In fact, German immigrants had a great influence on American food in general.  Over the next few weeks I will feature some of the dishes that I loved growing up, or ate at German restaurants, or learned to cook as a young bride. I’m starting with one that is new to me–Badish Schupfrudeln — Potato Noodles.

I did not realize until I delved into the subject, that Germans brought SO MANY food ideas to America.  And I had never focused on the importance of balancing sweet and savory (sour) in recipes–despite my love of hot potato salad with its sugar and vinegar, the fact that I use brown sugar in sauerkraut and my love of mouth-watering sauerbraten. 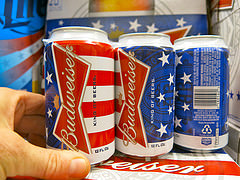 According to the website Life in the USA, there was a period when German restaurants were the height of culinary sophistication.  Columbus, Ohio, where I spent part of my childhood and went to college, boasted many German restaurants and breweries and still celebrates its German roots in the quaint German Village.  Cincinnati, Ohio is another town with strong German roots still showing. 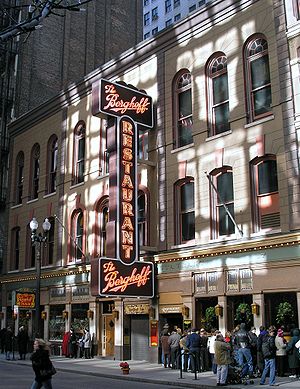 My all time favorite restaurant (and defintely my father Paul Kaser‘s favorite) was the venerable Berghoff Restaurant in Chicago Illinois. I remember sitting in the dark wood paneled rooms, with stained glass accents here and there. The most important factor was the mature male (always male) waiters (No, “I’m Jason, I’ll be your server.” here!)   The waiters wore formal attire, topped by an apron that reached nearly to the floor, and took orders without ever writing anything down. It was started in 1898 and still serves up German favorites, although it seems a sacrelige to see “gluten-free” on its menu that was once a carb-lovers hog-heaven. 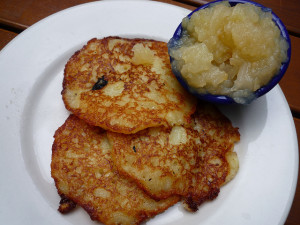 Without the German immigrants, we would not have sauerkraut, potato pancakes,  sticky buns, apple butter, knockwurst, bratwurst and liverwurst and 3-bean salad.  How about some strudel or Black Forest Cake for dessert? We wouldn’t even have cream cheese!  Although some other nationalities made a creamy cheese, the one we principally use today in America was invented in Philadelphia by German dairy farmers. And of course the beer.  American beer is German-style lager and the prosperity of breweries built many a midwestern city.

We’ve had our moments of trying to deny the German roots of America–see Benjamin Franklin‘s opinion of Germans in the last article I posted.  According to the Oxford Companion to American Food and Drink (2007),  the anti-German sentiment during World War I included changing the name of pickled cabbage from sauerkraut to “Liberty Cabbage.”  But we didn’t stop making and eating it. Or drinking the beer. Or eating the All-American hot dogs that evolved from German “wursts.”

So I will share some of these familiar foods in the coming weeks, but I wanted to start with one very German dish that I had never made or tasted–Badische Schupfrudeln (potato noodles).  Enjoy. 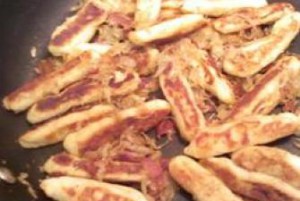 Alternately, you can drop each noodle in boiling water. Or boil briefly and then fry.