Catharine Sampsell spent her life surrounded by family–her husbands’ family. Like her husband, Joseph Kaser, Catharine’s parents Samuel Sampsell and Susan Klunge Sampsell* came from Pennsylvania.  But they moved to Ohio before Catharine, their first child to be born in the new state, was born. When I talk about Catharine’s father later, I will explain a bit more about the lack of information on the Sampsell family.

At any rate,  around the time that Catharine was born, the Sampsells (or Sampsels or Samsels) moved into that same Coshocton County area where Joseph Kaser had joined so many German and Swiss immigrant families from Pennsylvania. Joseph and Catharine met–I would bet it was in church– and married in March 1847, when Catharine was 18, (according to the Kaser Family History I refer to as G.B.–the Green Book). Since her own mother does not show up on the 1850 census with her father, it is likely that Catharine’s mother did not live to see the wedding or her first grandchild.

In 1849, Catharine Sampsell Kaser and Joseph Kaser’s first child, Susan (or Susannah) was born. According to the 1850 census, which I have discussed at length before, their small farm was surrounded by Joseph’s  uncles and his father.  The young motherless bride Catharine would have had plenty of family aunties around to give her advice and help. Her first years of marriage were busy ones, with four children born between 1849 and 1855.  After a nine year lull spanning the beginning of the Civil War, Emma was born in 1864 and two more in the next four years. (The next to last was my grandfather Clifford Kaser.

Catharine, 43 in 1871 when her last child was born, and her two oldest had already left home–Cornelius working on a neighboring farm, and Susan no doubt also employed by another family.  According to the scant records I have, Susan probably married in 1874.

By the time that Catharine’s husband Joseph died in 1893 (if the G.B. is correct about the date), Catharine, now 67, had only two adult children still living at home–Emma (28) and Edward (21). These two, both quite late to marry, were still living with her when the census was taken in 1900. However, in typical Kaser fashion, two other sons lived nearby. 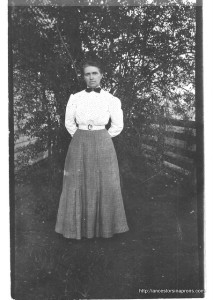 Edward finally married about 1905. Emma, however waited until after her mother died to marry George Sutherland, a widower who lived practically next door to her mother’s farm near Clark, Ohio.

Catharine Sampsell Kaser died in Feburary 1911 when she was just a few months shy of 83 years old, and was buried in the Clark (Ohio) Cemetery– with Kaser family members all around.

*Susan’s mother’s name is given as Susan Klunge in the Green Book, but I have not yet verified that anywhere. I have found zero records for a Susan Klunge or Kluge.

More details on Catharine and Joseph Kaser’s children can be found in my article on Joseph, the Carpenter.

The “Kaser Genealogy” (aka Green Book or G. B.) referred to is The Kaser History: A History of Dates and Other Interesting Facts (1994) edited by Deborah D. Morgan and others. Out of print. I obtained information from a cousin who owns a copy of the book.