“It’s a retroactive forfeit of meritocracy, a moment when you realize your positioning in the now is surrounded by shadows from then.”
Michael Twitty, Afroculinaria

Michael Twitty, in an open letter to Ben Affleck, encourages the actor to open up about his slave owner ancestors, expressing sympathy for his “embarassment.”

In case you missed the story, Affleck was featured on the PBS genealogy show, Finding Your Roots, last October.  When the Sony e-mail hacking scandal unfolded, e-mails revealed that Affleck had asked  the show to whitewash his family history He wanted them to remove any reference to his ancestors being slave owners. Professor Henry Louis Gates, Jr., host of the show, sent an e-mail to the producer asking what he should do, since Affleck is a megastar [and a “request” by a megastar is really a “demand, is it not?],  The producer replied that it would be okay to alter his family history if they didn’t get caught, but if word got out it would be ‘tricky.”

They ‘cleaned up’ his history.

Affleck apologized this month–5 months after the airing– blaming his request on his “deep embarrassment.”  Those who give him the benefit of the doubt accept that excuse. I don’t. I picture his publicity team surrounding him, saying “This is a disaster. It is going to ruin your image. You have to apologize.”  Whatever. He would have been better off to just cancel the appearance on Finding Your Roots.

If he had understood the word “history” Affleck wouldn’t have asked for the information to be deleted to begin with.  What our ancestors did, when documented, is what they did. Good or bad. But it is past tense. It doesn’t matter what THEY did. It matters what WE do.  And choosing to lie to save face is not an honorable choice. 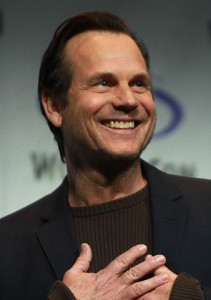 A much better choice was made in this week’s Who Do You Think You Are?–another celebrity genealogy show, when Bill Paxton learned he had slave-holder ancestors. Like Affleck, the genealogy search turned up some ancestors to be proud of, and some activities that made him cringe. Paxton’s reaction:

“It’s kind of disappointing from a contemporary persecutive,” he said.  “We read this great account of this man. But your history – good and bad – is your history.

“We have a tendency to want to hide the bad parts of our history, but we have to shine a light on all of it in order to understand who we are.”

Apparently, Ben Affleck believes all his ancestors are above average, and anything less reflects badly on him.
At Ancestors in Aprons, we believe that lost history is a lost opportunity to understand the present and the future.  Fair warning, ancestors–we try not to jump to conclusions, but we also don’t hide the facts that we find.
NOTE:  in the once-a-week Ancestors in Aprons newsletter that you may subscribe to here, you will get a bonus each week that does not appear on the blog.  This week it is my review of the three genealogy shows now on TV. Find out my favorite and see if you agree.