One thing that we KNEW about my husband’s ancestors–they were Swiss. 100% Swiss. I even said so in the first article I wrote about the Badertschers,  Swiss Immigrants Invade Ohio.

So the challenge to write about something “Unique” today had me floored.  I had several unique things I could find among my ancestors, but Ken’s? No way. Swiss Mennonites, immigrated within the 19th century, dairy farmers, large families. They were dependable.

And then I learned it was not true. He is NOT 100% Swiss. In fact, his mother’s maiden name, Bair, is not Swiss at all–it is German.  Even Ken’s sister did not know the shocking truth. And among his ancestors, that makes the Bairs unique.

Now you may want to quibble. The Swiss Badertschers and Stuckeys and Amstuz’s and Schneiter’s and Müllers and all the rest were German-speaking Swiss, so what’s the difference? For one thing, they thought of themselves as Swiss, not Geman. (Unlike, say, my Scots-Irish ancestors who moved to Ireland but always thought of themselves as Scottish.) But more importantly those census takers who recorded the language the Swiss immigrants spoke as German were wrong. They spoke Schweitzerdeutsch,which  is much more than a dialect. It is a separate language .  In fact, as that article I linked in the last sentence points out, speakers of Schweitzerdeutsch would have to go to school to learn German as a foreign language.

So, briefly, an introduction to the Bair who revealed to us that this branch of Ken’s family was unique and Ken is not 100% Swiss, and learn that there are other things that make them unique in Ken’s line. There is a long way to go on this research, And it isn’t helped by spellings of Bair, Baer, Bear and maybe even Beer. I have held it down to Bair below, although I suspect it was flexible in Germany, tending toward Baer and translated incorrectly as Bear in English. Here is what I know at the moment. 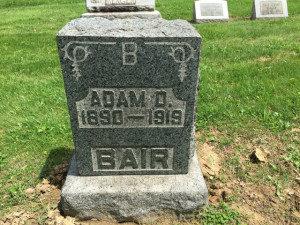 Daniel M. Bair’s father was another Daniel Manbeck Bair [Sr.] 1802 in  Pennsylvania according to an 1860 census and in a family tree that looks very accurate so far.

But at the moment that is all the farther I can go with the Bairs.  Too many Daniel Bair/Bear/Baer and too many Abrahams , also. There are Daniel Bair/Bears in the Civil War, and one Abraham Bair that I’ve spotted in the War of 1812, but so far, no way to prove if they’re the right ones.

At least I know that Ken’s Bair generation did come from Germany since besides the probability of the Bairs immigrating from Germany, the family of Caroline LImbach, the wife of Daniel Bair Jr., are definitely from Bavaria, Germany. And the Manbeck line (mother of Daniel Manbeck) may prove to have German roots as well.

So we know that unlike the other lines we’ve been tracing, that only go back 2 or 3, this one reaches back at least 5 and perhaps more generations in this country. And besides–they are not all Swiss. How unusual in this family.

There was much more research, and more is ongoing, but you will get those references as I talk about individual people.