Today I go back to my main source for Swiss immigrant recipes, the cemmorative cookbook for the 100th anniversary of the founding of the Mennonite Church in Sonnenberg, Ohio. 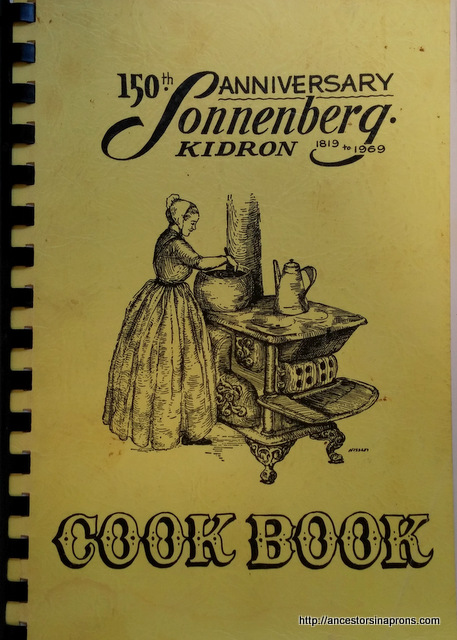 I was attracted not only by the recipe, but by the German name in the title of the recipe submitted by Mrs. Lila Gerber. Gleichschmer Pound Cake (Swiss Made).

Although I do not speak German at all, I figured it would not be hard to get a translation on line. The first site I consulted, said that Gleich means “equal or same as” and Schmer means “pork fat”.  Before giving up on the impossibility of a cake called “same as pork fat”, I checked for alternative spellings. Schmiere means grease, which is a little better, but not much. See the connection to Yiddish schmear–spreading something -like cream cheese– on your bagel?

Since my mind wandered off to Yiddish, I might as well mention that linguists have said that Sweizterdeutch, the variant of German spoken  in the Germanic language regions of Switzerland (including the Mennonites who emigrated to America) is closer to Yiddish than to any other language.

Getting back to pound cake–when I typed Gleichschmer into another search engine, it asked me if I wanted Gleichschwer instead.  Sure, why not?  Give it a shot!  And lo and behold, Gleichschwer means equal weight. As you probably know, “pound cake” gets that name because the ingredients are all one pound–flour, sugar, butter, eggs.

I still don’t know if Sweizterdeutch has that variant spelling of the word, or whether it was simply a misprint in the cook book, but at any rate, my recipe card will be headed Gleichschwer, with a “w”.

I have printed the recipe instructions below just as Mrs. Gerber’s recipe reads in the Centennial book, including “1 knife tip salt”, but in the notes have made some adjustments to the process, that she may have assumed everyone knew.

Finally, to be perfectly honest–this is a Half Pound Cake rather than a Pound Cake. The measurements come out to 1/2 pound butter, sugar, flour and eggs–although the flour is a tad short of 1/2 pound. 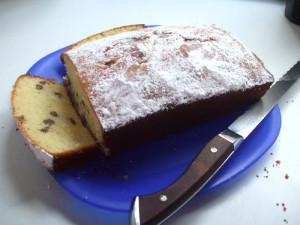 This recipe, submitted by Mrs. Lila Gerber, has some of the characteristics of those times when women were supposed to know how to do certain things in the kitchen. For instance, "1 knife tip salt"--how much? About 1/4 tsp.

I beat the butter and sugar together and then beat them for three minutes with an electric mixer before proceeding to add the eggs. After the eggs were mixed in, lemon flavorings, then the flour, salt and baking powder, and finally stirred in the nuts.

The recipe as written does not specify pan size, but this amount fits in a large loaf pan. I recommend lining the bottom of the pan with parchment and then lightly buttering the parchment paper. I did change the cooking temperature and time, because at the suggested 350 degrees for one hour and a half, my cake finished early, and the top cracked, indicating a too-hot oven.

In fact, this is a 1/2 pound cake, rather than a Pound Cake. If you double it--using a pound butter, flour, sugar and 8 eggs, you can make it in a tube or Bundt pan.

If you want, sift confectioner's sugar over the top as shown here.

For extra lemon punch, simmer the juice of three lemons with 1 cup sugar until syrupy. After the cake is baked and cooled slightly, turn out on a rack and remove waxed paper. Put cake on plate, or back in pan. Poke holes in the top with a toothpick and pour the syrup over the top of the cake to sink down inside. (But that is an addition to what Mrs. Gerber has presented as an authentic Swiss recipe.)