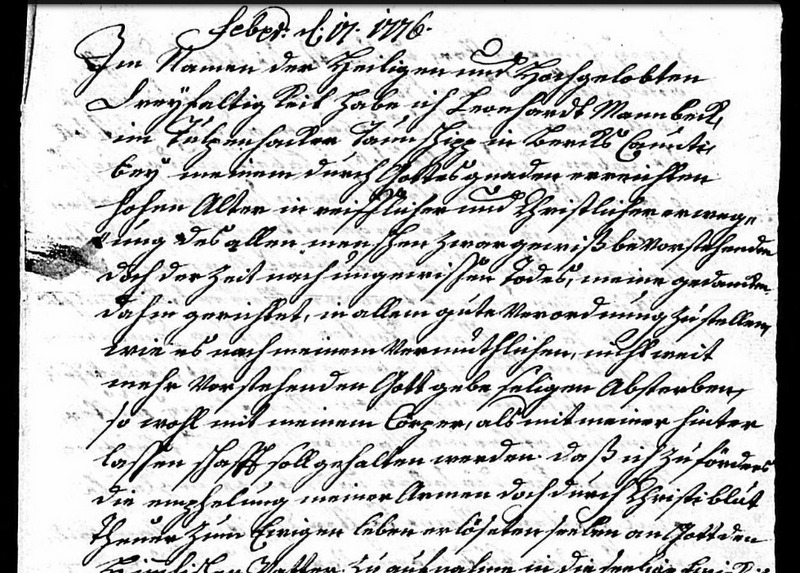 English speakers changed his name from the more romantic Leonhardt (Lion heart) to Leonard, and dropped the extra “N”.  Leonard is the 5th great grandfather of my husband, Ken Badertscher, and father of Rudolph. Leonard, born in 1720  headed the family who first came to North America from Germany. Unlike his son, Rudolph, Leonard and his wife Maria Appolonia stayed in Pennsylvania, not far from Philadelphia where their ship landed in 1765.

Information on Leonard and Maria Appolonia is scarce. Most of what appears on various family trees on Ancestry.com and Family Search.org comes from a family history of a different family, the Grimms. Although the information in that family history provides a starting point, it contains inaccuracies and most of the hard facts about the earliest Manbecks in America still needs documentation. With that disclaimer, however, let us look at the most interesting document we have–the will and property inventory of Leonard Manbeck.

The Will Tells Us Three Things About Leonard 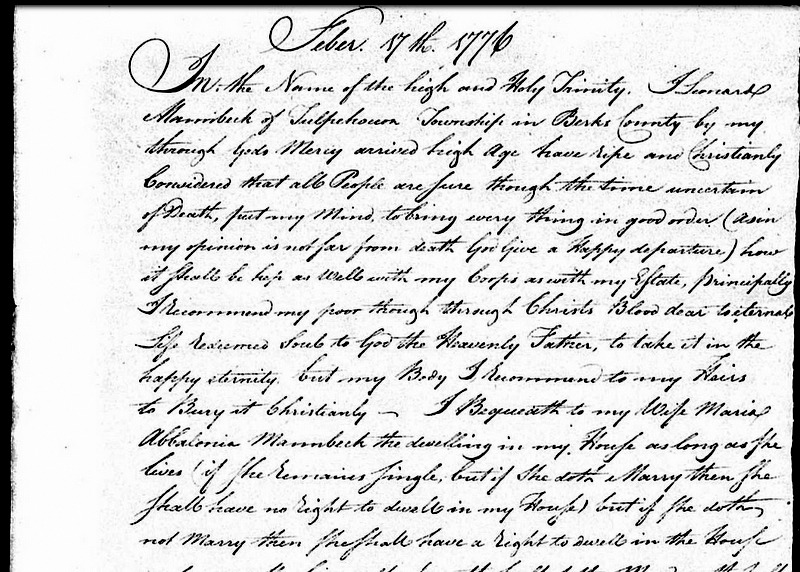 Leonard Manberck Will as transcribed in English

Leonard’s original will, written in German, is stored in Berks County Pennsylvania where he settled.Fortunately, the English transcript is filed with the German original.  Unfortunately, the translation of the preamble is terrible but the simpler instructions for bequests seem to be correct. Leonard wrote his will in 1776, although he apparently did not die until 1788, because that is when the will was probated and the inventory carried out.

That caught my eye, because we all know what was going on in 1776–a war.  Leonard, who had arrived on this continent just eleven years earlier, may have been thinking about his mortality when he wrote this will. Or he might have fallen prey to one of the diseases like smallpox or influenza that swept through the colonies in that time period. All the other ancestors whose wills I have examined, waited until they were actually close to death to write their will.  Leonard’s will, in the awkward translation, says:

Considered that alle People are pure though the time uncertain of Death, put my Mind to bring every thing in good order (As in my opinion is not far from death God Give a Happy departure)

So we know that for whatever reason, Leonard thought he was “not far from death” in 1776.

The second thing we know is that Leonard still spoke German as his first language.  Even if he knew enough English to carry on every day affairs, he did not trust his knowledge of English for this important document. 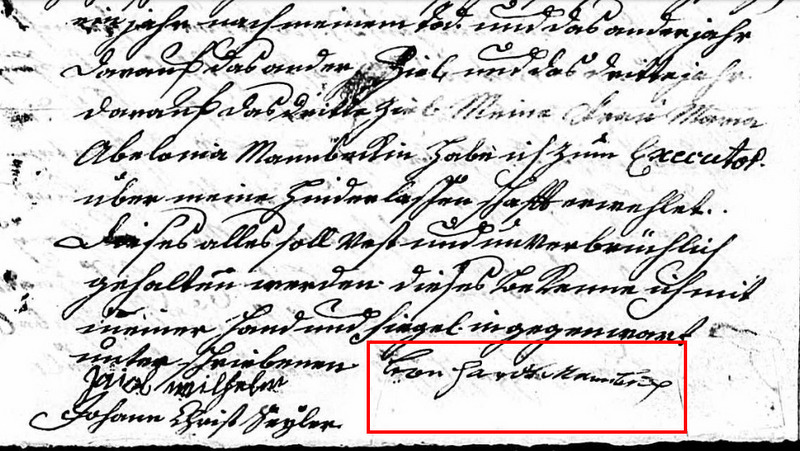 Signature of Leonhardt Mannbeck on the German version of his will.

Third, Leonard could read and write in German.  The German version of the will is written in the same hand as his signature. According to the inventory, taken when he died in 1888, he wore spectacles and owned four books.

To My Wife–as Long as She Is Single

Preliminaries establishing his religious credentials over with, he gets right into the heart of the matter. The first person to be mentioned, his wife Maria Appolonia, gets a list of bequests including 1/3 of his land and 1/2 of his house and the garden and the meadow. But Leonard seems fixated on being sure that she not benefit from his estate if she remarries.

More unfamiliar terms show up in the Inventory list, and it is clear that flax and spinning were not as important to Leonard as to his son Rudolph.  In fact, his wife apparently was not big on spinning, as the “large spinning wheel and wood card ” are not among the objects reserved for her. Neither does she get the churn and much pewter and earthenware. How is she to make butter from the milk of the one cow she will own?  And why does she only get only 4 spoons and two plates, a pewter basin, iron ladle and forks to cook with, while the rest is listed in inventory (presumably to be sold, although the will does not explicitly state that)?

A Rift in the Family?

The next thing that sticks out is that Rudolph gets stiffed by his father, even though he is not just the eldest son–he is the ONLY son. Rudolph moved his family to Ohio in 1818, after his father died. Apparently his relationship with his father was rocky long before Leonard’s death. Rudolph fought in the Revolutionary War. Did Leonard disapprove?

I bequeath to my son Rudolph Mannbeck five shillings for his first Birth. He shall have nothing further.

Leaving Rudolph 5 shillings is rather like leaving a nickle for a tip for a waiter whose work you don’t respect.

Next in the will comes a daughter Christina Sambelrin, who shall have no more because she received her inheritance in Germany (probably her dowry).

After the enumeration of bequests to Maria Appolonia (if she doesn’t re-marry) Leonard says that his two daughters Christina and Catharina Manbeck “shall share the rest equally.” Besides Christina will have the mare for 45 pounds, and Christina shall have 22 pounds 10 shillings over a three-year period.

This seems to indicate that he has a daughter Christina in Germany, who married a man named Sambelrin. But he had another daughter called Christina, unmarried, who lived in Pennsylvania, presumably with her mother and her sister Catharina.  This is interesting because the Grimm family account and therefore most family trees list only two daughters, and blend the two Christinas. I believe there were three daughters–one still in Germany.

According to the Inventory, Leonard’s total worth comes to 22 pounds, 16 shillings and 10 pence.  However, after Maria Appolonia pays all the bills, she is left with only 5 pounds, 4 shillings that will be split between the two daughters Catharina and Christina, after 5 shillings is paid to Rudolph.  Unlike Rudolph, who left more than 110 pounds cash in addition to his possessions,  Leonard was not able to amass cash. We do know that besides the difficulty of getting started in a new country, Leonard faced the uncertain economy of Revolutionary war times and the economic depression that followed the Revolution.

As with Rudolph, many questions remain, but it is amazing to learn these details of the life of someone born in 1720, who lived through the period of the Revolutionary War.