Yes, I know Halloween is past, but….

When I discovered that I had not put any gingerbread or ginger cookie recipes on Ancestors in Aprons, I realized what a serious oversight that was.  Gingerbread was a very early type of cookie* , and with the holidays coming, we want to find the best possible recipe for gingerbread boys. Today it is Hutty Cutty Cookies.

Stay tuned–this week, a recipe from the 1920’s America, next week, a German spice mixture for Gingerbread cookies, and the following week a genuine Ginger Cookie recipe from Germany that utilizes that special spice mixture.

I flipped through my go-to old recipe book**–the one that belonged to my Great Aunt Maude–and found not one but SEVERAL Ginger cookie recipes–Ginger Snaps, Soft Ginger Cookies, Molasses Wafers, Ginger Bolivars (like Ginger Snaps except with molasses instead of sugar), not to mention ginger cake and four kinds of ginger bread and Ginger Gems.

But the one I could not resist had the puzzling name of Hutty Cutty Ginger Cookies. What or who is Hutty Cutty? Beats me. Beats Google, too.  The closest I found to an answer was a letter to a Chicago newspaper asking about a children’s story from the 20s called Hutty Cutty. Sounds like a likely source, and if your researching skills are better than mine, PLEASE let me know who/what Hutty Cutty is and what it/he/she has to do with Ginger Cookies.

I like to compare lots of more modern recipes before baking or cooking an old recipe, and in this case I learned something from Joy of Cooking that I have somehow missed all these years.  Instead of rolling the cookies out on a floured cloth or sheet of whatever and transferring them to the pan–roll them out on a lightly-greased pan and cut them there. What a revelation!  It worked just great for these cookies.  Just don’t try it on a pan coated to be stick-proof, or you’ll damage the coating.

Although I don’t include the frosting in the recipe below, I frosted these with a simple confectioner’s sugar glaze (just mix in drops of water until you get the texture you want) and then sprinkled with orange sugar and made faces with one of those little tubes of decorating gel. It doesn’t go far and is rather expensive, so I’d recommend making your own, or dipping a toothpick in melted chocolate for the face on the jack-o-lantern. 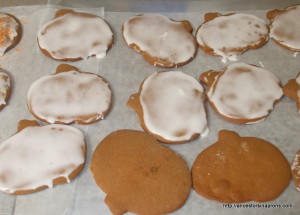 Control the spiciness and make them soft or crispy--delicious gingerbread cookies.

I made quite a few changes in the original recipe for Hutty Cutty Gingerbread Cookies from the Buffalo Cooking School Cook Book. First I cut it in 1/4 because the original called for 14 or 15 cups of flour, which would have had me baking all day! I used more flour than called for, because their proportions resulted in a very sticky mass. They did not suggest refrigerating the dough, so I don't know how you could roll it.

You control the spice mix. I added a bit of ground cloves to kick up the spiciness, and you can adjust as you like.  I also used brown sugar although the original recipe did not specify brown.

You also control crispiness by how thin you make the cookies and how long you cook them.  I rolled my cookies to slightly over 1/8" for cutting and baked just over 20 minutes (stoves vary, so you'll just have to keep an eye on them).  Mine came out soft, but not cakey, and have stayed a nice soft texture for several days.

The spice taste kicks up a bit after they have been stored in an air tight container for a while.

*For more history of cookies see the Kindle edition of Cookie: A Love Story: Fun Facts, Delicious Stories, Fascinating History, Tasty Recipes, and More About Our Most Beloved Treat

(It was apparently published by many newspapers, those who carried the author’s columns)

Note:  The links here lead to Amazon, because I am an Amazon affiliate. If you buy anything through those links, even though it costs you no more, I make a few cents to support Ancestors, and I thank you for your support.