Perhaps third time will be a charm. I have made this recipe twice, and although the results are passable–particularly with icing–I don’t think I’ve totally conquered the Lebkuchen yet. I hope you made some of the Lebkuchengewuerz so you can use it in this cookie. 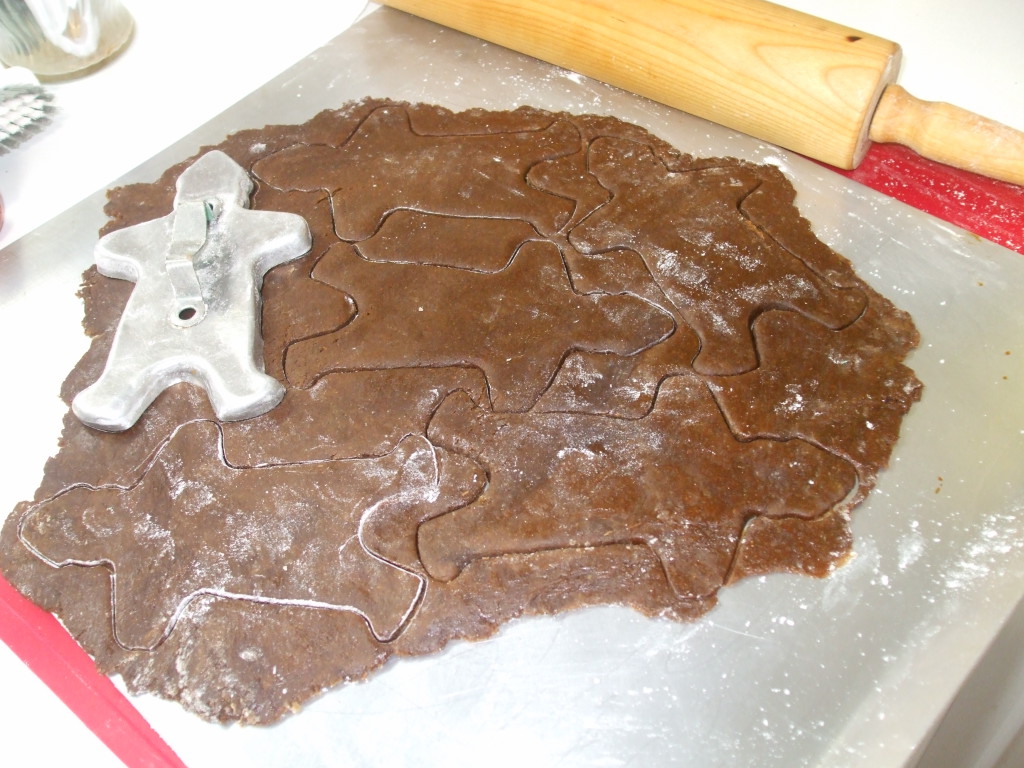 What I Did Wrong

As I explain in the notes with the recipe below, the first time I made the German ginger cookies, Lebkuchen, I added too much flour. It looked okay when I put it in the refrigerator, but 24 hours later, it was almost impossible to roll out because it was so stiff.  I also made a stupid mistake–forgetting to add the honey with the molasses, and so added it later–which changed the consistency of the dough and just in general was a rotten idea.

The flour you see on the dough, is not because I floured the pan (only a light film of vegetable oil), but because I dipped the cookie cutter each time I cut another cookie. It’s the best way to ensure a neat cut.

Then I just peeled the dough away from the images, rather than having to try to pick up the cut-out with a spatula and moving it from cutting board to pan. It saves a lot of distortion and disaster.

My second (or third, but who’s counting?) mistake was to leave another two trays of cookies that had been cut in smaller shapes in the oven a bit too long. The over-browned in a hurry and got tossed in the garbage. So keep an eye on these cookies as they bake.

With my second batch, I didn’t make any of the egregious mistakes I made in the first batch, but somehow they just didn’t have the spicy taste they should have.  I must have inadvertently used too little spice.

Don’t be discouraged by my problems, though. Lebkuchen really are not difficult. I suspect, though, that they are better with practice. After all they’ve been making it since 1395 in Nuremburg. This is an authentic German recipe from the website German Pulse

I rolled the Lebkuchen out on a lightly greased cookie sheet, and cut them with a cookie cutter that I inherited from my mother.  Then I just peeled the dough away from the images, rather than having to try to pick up the cut-out with a spatula and moving it from cutting board to pan. It saves a lot of distortion and disaster.

Poor cookie cutter guy has seen better days, with all sorts of little dents here and there, but he’s been making gingerbread men and Christmas Santa Clauses for nigh onto 60 years, I imagine, so I don’t want to retire him. You can see how the handle bends down instead of standing up straight–that’s from decades of being pushed into dough. 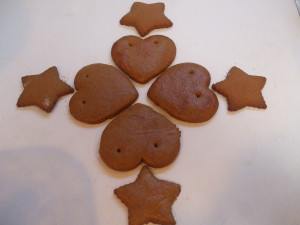 An authentic German recipe for a favorite Christmas ginger cookie--Lebkuchen. Eat it or hang it on your tree.

But if you made Lebkuchengewuerz (spice mix) from this recipe (Highly recommended) you can use it instead. In my opinion the amount of spices called for in this lebkuchen recipe is a bit anemic. If you want a very mild cookie, go with these amounts, but if you like it spicy, use up to double the amount.

I used 2/3 White Wheat flour and 1/3 rye flour and liked the hearty flavor, but it would be fine with all white flour if you don't have rye.

Warning--do not add too much flour.  This dough is going to look impossibly soft. It WILL get more solid in cooling process. (I had to kind of scoop it up with plastic wrap to make a ball of dough for the refrigerator.)  With my first batch I added too much flour and it was very, very difficult to roll out once it had cooled in the fridge. For me, 3 1/2 cups worked. Although the recipe says "soft not sticky", there is no way that any dough with both molasses and honey is not going to be sticky!