Although I have not found the first Cochran to immigrate to North America, I do know which Cochran was the first to arrive in Guernsey County, Ohio.

Alex married Sarah (or Mary) Adams in 1787 with the Presbyterian minister Reverend John McMillan presiding. He and his wife first lived near Hickory, Pennsylvania.

Alex and his wife moved with their family of six children to Belmont County Ohio. Accounts vary as to when they relocated–from 1798 to 1802. The area the family moved in to was close to the western edge of Belmont County. On the east side, Belmont runs along the Ohio River. In 1810, Guernsey County was created, including the far western part of Belmont and the family became residents of the new county (without moving).  Thus, Guernsey County histories consider them to be early pioneers of Guernsey County.

The first map below shows the 1801 shape of Ohio Counties (WA=Washington and BE= Belmont, the two from which Guernsey was created.) 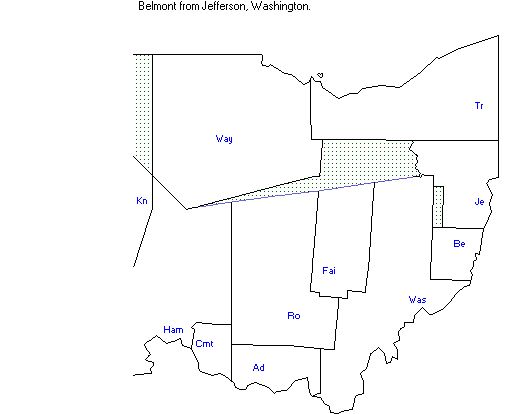 1801 State and County Map of Ohio . Click to go to source web site.

This is a current map of Ohio counties. 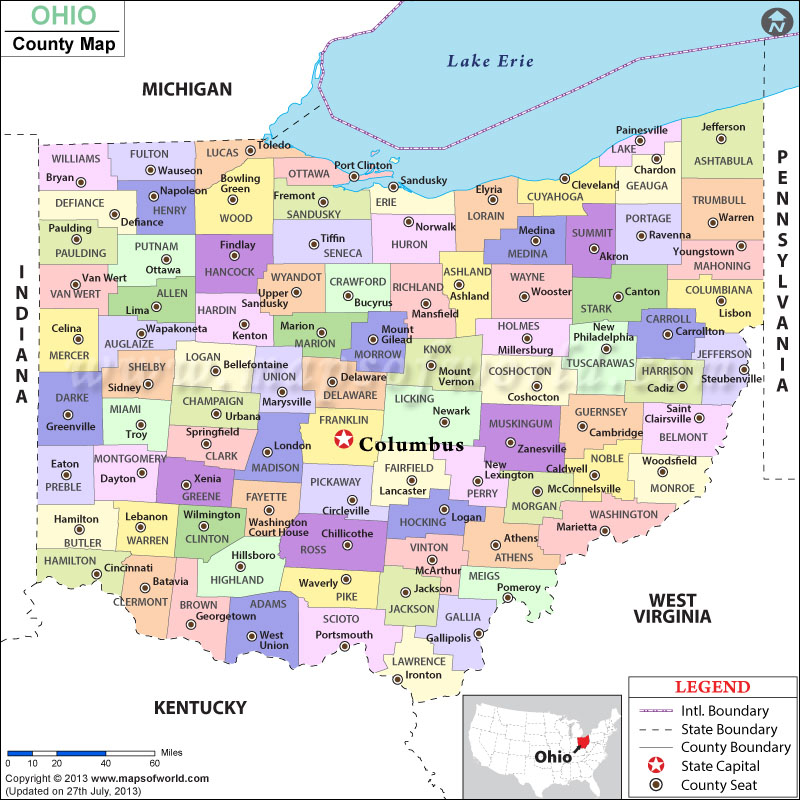 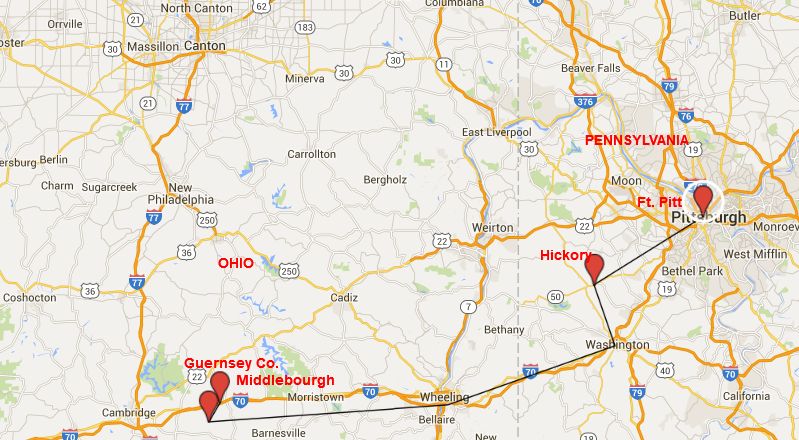 Map of Alexander Cochran homes in Pennsylvania and Ohio.

Alexander’s son William (my 3rd great-grandfather) was one of six children born in Pennsylvania, although the last of those might have died before they moved to Ohio.  Alexander had six or seven more children after leaving Pennsylvania.

The 1878 obituary of Alexander’s son William (known as Col. William Cochran) vividly describes the Ohio Territory that Alexander moved his family to around the beginning of the 19th century. Even allowing for the romanticization of pioneer days that was rampant in the late 1800’s, this reminds you of the challenge these early settlers undertook.

…came with his father’s family to the territory now embraced within the limits of Guernsey county, about the year 1802, and a little while before the organization of the State of Ohio, from the North-West Territory of land ceded by Virginia to the general government.  The first settlement of the family was made upon the land embraced in the Carlisle possessions near the Salt Works on the National road, between Washington and Middlebourne  His father located there when the region was an unbroken forest, no other “clearing” being then within several miles of him.  Afterward they moved a few miles eastward up the Salt Fork on Wills Creek upon land which remained in the family until a very few years ago…He [Alexander’s son]  grew up with and noted the coming of people into [the county] and watched its growth and development, and lived to see the territory it then embraced rise from a mere handful of persons to a population of thirty-thousand souls, and from a wilderness of woods and swamps to a region filled with farms and dotted with twenty towns.

Alex would have seen this amazing growth and change also. It appears that he left Pennsylvania very shortly before his father died, so in addition to the challenge of breaking into new territory, he was separated from his immediate family.  But not from Cochrans in general. They were thick on the ground in Ohio and neighboring states. Alex and his wife had many children–one of whom would be my 3rd great grandfather. I am lacking the most basic information about most of those children. The six born in Pennsylvania:

After the move to Ohio, these are the possible additional children (I will add information as I find it.)

Alexander’s first wife died in 1820 and he remarried a woman named Jane Henderson [EDIT January 2018. Thanks to a reader/cousin, I now have the marriage certificate of this couple and learned her first name and that her last name is Henderson, not Henson). 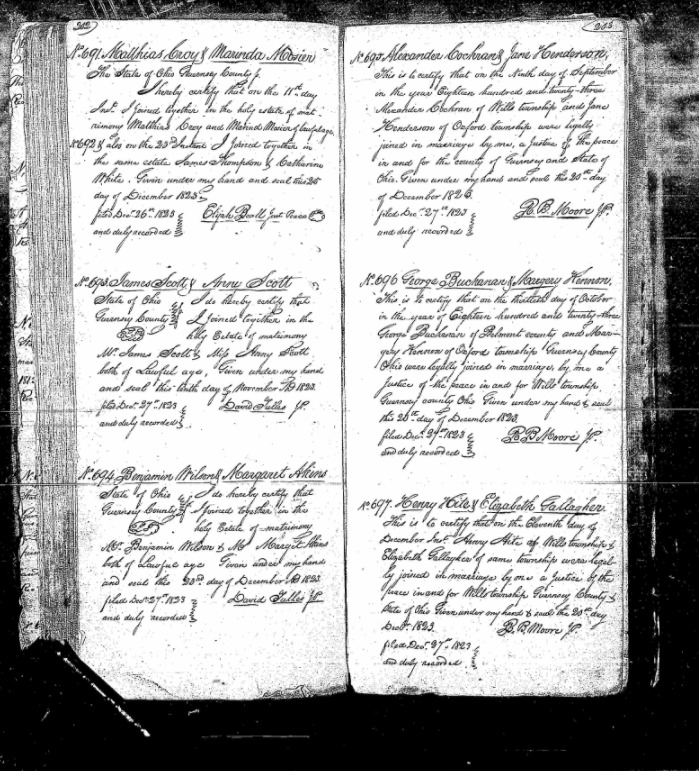 Marriage certificate of Alexander Cochran I and Jane Henderson

They had one child:

In 1850, Alex is reported living with Cornelius and Matilda Dillahey and their children in Middletown (Middleborough on the map above), Guernsey County, Ohio. The 1850 census does not specify relationships to head of household, but Matilda must have been Alex’s daughter. The age reported for him is ninety, which would mean he was born in 1760 instead of 1765. More likely, everyone had lost track of how old he was.

There is no trace of a gravestone for Alexander Cochran.

IMPORTANT NOTE: Most of what I am writing about the Cochrans relies on 2nd hand reports and family history and on some assumptions (by guess and by golly). I cannot thank enough the distant cousin who contacted me with much of his own and George Williston’s past research. As I discover more concrete information, I will revise these entries.

The Identity of William Cochran, Sub-Lieutenant of Westmoreland and Washington Counties 1777-1783. by George Williston. Circa 1999.  Paper e-mailed to me by Tom Fowler.

Some relevant footnotes from that paper: